/ Sensors / Michigan Tech Researches Feasibility of UAS Use in Transportation

Michigan Tech Researches Feasibility of UAS Use in Transportation 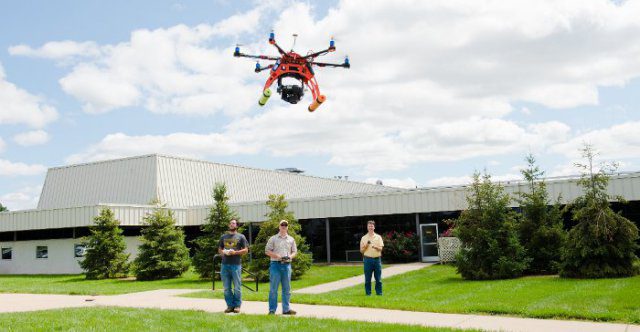 The Michigan Tech Research Institute (MTRI) is currently looking into the use of UAS from a transportation perspective.  MTRI scientists and faculty from the main Michigan Tech campus are using unmanned aircraft systems to help the US Department of Transportation’s Research and Innovation Technology Administration (USDOT/RITA) and other agencies to develop low-cost, highly-efficient ways to handle tasks that range from mapping the condition of unpaved roads to understanding traffic jams and evaluating the conditions inside culverts.

The research is designed to help transportation agencies save money and reduce risk to staff that would usually have to always be in a roadway, on a bridge, or inside a confined space to understand infrastructure condition.

The Michigan Tech UAS look like miniature helicopters, and MTRI has two UAS it is currently using: a Bergen hexacopter and a DJI Phantom quadcopter.  The hexacopter; largest of the two, it has six blades and a four-foot rotor span.  It costs $5,000 as configured for research and weighs just over 11 pounds and can fly a digital camera like a Nikon D800. The smaller UAS has four blades that spin in a two-foot diameter. It weighs only two pounds and costs just $700 and can fly smaller cameras like the Go Pro that is a favorite among action sports users.

Both UAS take full-sized high-definition digital images, with the higher resolution ones capable of better than one centimeter 3D resolution.  “They can show us how many potholes  are in a road and how deep they are, the degree of crown (curve) in a roadway, identify rutting conditions in a roadway, wash-boarding, drainage, and evaluate density and severity of road and bridge problems,” says Brooks. Up to now, agencies responsible for roads have been reactive, checking out problems after someone calls to complain, he explains.  “This technology turns reactive responses to proactive responses through improved asset management practices,” he says.

David Dean and Richard Dobson, assistant research scientists at MTRI, specializes in interpreting aerial photographs. They see what the camera is seeing as the UAV flies over a road or bridge, or even inside a pump station or culvert; and they stitches still photos together into a three-dimensional model.

The UAS’ flight is controlled by a “pilot” on the ground, reminiscent of remote-control model airplanes, but if they have to, they can find their own way home.   They fly about 100 feet above the ground, well below the Federal Aviation Administration’s permitted ceiling of 400 feet.  Both have cameras, GPS, and on-board stability systems.

And MTRI is experimenting with another, even smaller quadcopter, the open source Crazyflie, for inspecting confined spaces and seeing if it’s safe to send a person inside there. It weighs two-thirds of an ounce and costs $179.  “Its controller is bigger than the vehicle,” Brooks remarks.

Right now, UAS can only be used regularly by government agencies including public universities.  But the FAA is expected to issue regulations by September 2015 that will allow their commercial use in the national airspace.

MTRI also represents the University in the Michigan Advanced Aerial Systems Consortium (MIAASC), which was working to get the Alpena, MI area designated one of six unmanned aerial systems FAA test sites nationwide.

“We are on the cusp of an explosion in UAS data collection that can help save money and increase safety during our inspections of roads, bridges, and confined spaces,” Brooks predicts. MTRI’s work with UAVs will lead the way.