China Deploys an Online Platform for Public Feedback on Transportation 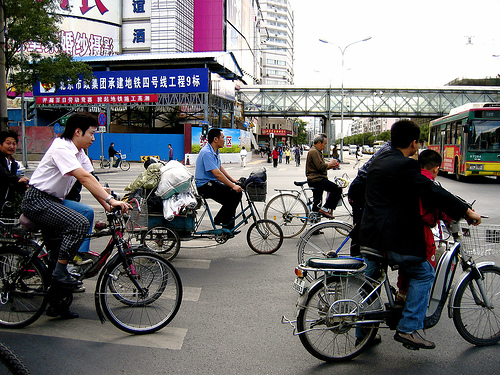 On Sunday, Yin Jialun, a sophomore at Tsinghua University in Beijing, cycled in and around the campus, collecting information on cycling facilities in the community he is most familiar with. He found out that part of a bike lane was blocked by road construction. So, with his iPhone, he uploaded this information, GPS-coded, to a web portal, which is now in beta and will be open to the public later this year.

He was one of the 50 students from Tsinghua University that volunteered to test the functionality and interface of the portal, newly developed by Beijing Transport Research Center and the World Bank. Friends of Nature, a Beijing-based environmental NGO, helped organize the testing event on Sunday.

When this online platform is officially launched, anyone can submit a mini report on issues related to quality of cycling and walking infrastructure as they discover, via web, smart phone apps, SMS or social media. Like during the one-hour testing on Sunday, the volunteers spotted a formidable array of issues that hamper cycling and walking, such as vehicles parked in bike lanes, no bike parking station or safe location to lock their bikes, areas with mixed traffic placing cyclists and passengers at greater risk.  All user-generated reports are then mapped and visualized, available for others to view and comment on.

This is a new tool that the transport planners in Beijing hope to use to collect feedback from citizens on urban transport conditions, so as to build them safer and more accessible

Comments are disabled
NEXT ARTICLE
The Well-Educated Provide an Economic Boost, But Cities Find it Hard to Lure Them
May 30, 2012
PREVIOUS ARTICLE
Fargo Graffiti Sensors Sniff Out Spray Paint
May 30, 2012