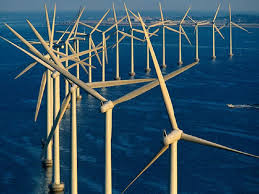 The rotor and mast of a wind turbine can oscillate even in normal operation. The analysis of these oscillations plays an important role when the equipment is being developed and maintained. Up to now, this analysis has only been possible at discrete points located directly on equipment. The Fraunhofer Institute of Optronics, System Technologies and Image Exploitation IOSB uses modern information technology to remotely measure the oscillatory pattern over the entire structure of the facility from several hundred meters away.

“Wind turbines oscillate with displacements of up to a meter in magnitude, even at normal wind speeds. This represents a large load for the material, which can lead to damage and worst case to failure of an installation,” says Dr. Ilja Kaufmann from the Optronics Department of IOSB in Ettlingen. For this reason, operators continuously check how strong the oscillations are by using sensors built into the mast and rotor blades. The disadvantage of this approach is that measurements are only made at the locations where the sensors were mounted. “Obtaining a comprehensive oscillatory pattern over the entire installation is impossible using this technology,” according to Kaufmann.

Kaufmann and his colleagues have taken on this problem. From March 10th to 14th they will be presenting a technological system at CeBIT in Hanover with which the oscillation analysis can be completely carried out from a distance of several hundred meters. The system consists of a laser that is directed at the installation and able to measure the oscillations at all points on the surface. To accomplish this, the laser automatically tracks the motion of the moving parts like the rotor blades.

The centerpiece of the system responsible for this is an IT-based tracking system combining a camera and a laser. These are mounted on a head that can pan and tilt to follow the rotor blades. The camera records images of the installation and forwards these along to software that processes the images and builds a model of the rotary motion from the data. With the help of this information, the pan and tilt head is positioned so that the laser automatically follows the rotor blades. The camera simultaneously collects data about the exact position of the roughly two-to-three centimeter laser spot on the rotor blade in order to stabilize it on the revolving surface.

This way, as many points on the equipment as are needed can be scanned during operation – even from a great distance. “Considerably more comprehensive analyses can be carried out very quickly than are possible using fixed sensors. The measurement interval is variable: the slower the oscillations, the longer the laser takes measurements,“ says Kaufmann.

The system is compact and easily transported to the desired position using a vehicle. Due to its extended range, offshore installations can be examined from on board a ship, assuming that you compensate for the ship’s own movement. “Many wind farms in Germany have been running a good 20 years already – often the maximum operating life. Operators can use our technology to evaluation their installations. We can provide decision-making assistance for questions like ‘Is it in good enough shape that I can continue to operate it, or should I sell it and build a new one at the same site?’” according to Kaufmann.

At CeBIT the scienstist and his colleagues will be displaying a prototype of the diagnostics system. Visitors can trace the path of the low-power laser beam’s green dot on the rotor blades of the six-foot wind turbine model at the Fraunhofer booth (hall 9, booth E40). The images from the camera and of the oscillation analyses can be seen on two monitor screens of the system.