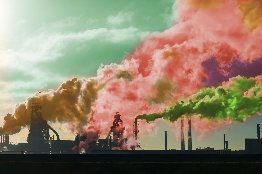 Aerial mapping company Bluesky is launching a service to map air quality across towns and cities. Having successfully completed a project to map air pollution in the city of Leicester Bluesky is seeking new sites in the UK to trial its ground breaking survey technology. Using a world first spectrometer, developed by scientists at the University of Leicester, mounted on an aerial survey plane the system can accurately record levels of nitrogen dioxide across entire cities. The colour coded air pollution maps can be overlaid on digital maps or online mapping systems such as Google Earth.

“Air pollution is a real and present environmental threat to public health in the UK,” commented Bluesky’s Technical Director James Eddy and Industrial Associate at the University of Leicester. “Having successfully deployed the Airborne Air Quality Mapper for the first time over the skies of Leicester we are keen to trial the system in other UK cities and locations to obtain comparative datasets.”

In the World Health Organisation European Region exposure to air pollution is said to decrease the life expectancy of every person by an average of one year. While lower than other parts of the world a recent study saw this figure rise to 22 months in at least 25 European Cities. Defra (Department for Environment, Farming and Rural Affairs) estimates that air pollution reduces average life expectancy in the UK by 7-8 months, costing the UK £20bn per annum.

“The significance and potential impact of air pollution is well understood,” continued Eddy. “It is also accepted that exposure to air pollutants is largely beyond the control of individuals and therefore requires action by public authorities at the local, national, regional and even international levels. By capturing accurate, reliable and up to date information that can be easily understood and communicated we are trying to arm those responsible for managing our cities and protecting our health with the data they need to make informed decisions.”

The Airborne Air Quality Mapper (AQM) trials will utilise the University of Leicester’s world leading Compact Air Quality Spectrometer, mounted on a dedicated aerial survey aircraft. The device monitors visible light and measures how much light is lost at specific wavelengths absorbed by NO2. The technology has previously been used as part the CityScan project with devices mounted on tall buildings in Leicester, Bologna and London during the Olympics to build 3D maps of pollution across the cities.

Nitrogen dioxide (NO2) is part of a group of highly reactive gasses known as nitrogen oxides. NO2 forms quickly when fossil fuels are burned for example petrol or diesel in a car or natural gas in a domestic boiler or power station. There is clear evidence that high levels of NO2 are linked to adverse effects on health including increased risk of respiratory illnesses such as bronchitis and even heart attacks and World Health Organisation statistics show 1.3 million deaths worldwide result from outdoor air pollution.

Bluesky is a UK-based specialist in aerial imaging and remote sensing data collection and processing.  An internationally recognised leader with projects extending around the globe, Bluesky is proud to work with prestigious organisations such as Google, the BBC and Government Agencies.

The University of Leicester is a member of the 1994 Group of universities that shares a commitment to research excellence, high quality teaching and an outstanding student experience.
www.le.ac.uk

The Earth Observation Science group, based in the Space Research Centre at the University of Leicester is an internationally recognised multi-disciplinary team dedicated to research into many aspects of remote sensing, atmospheric and Earth surface science.