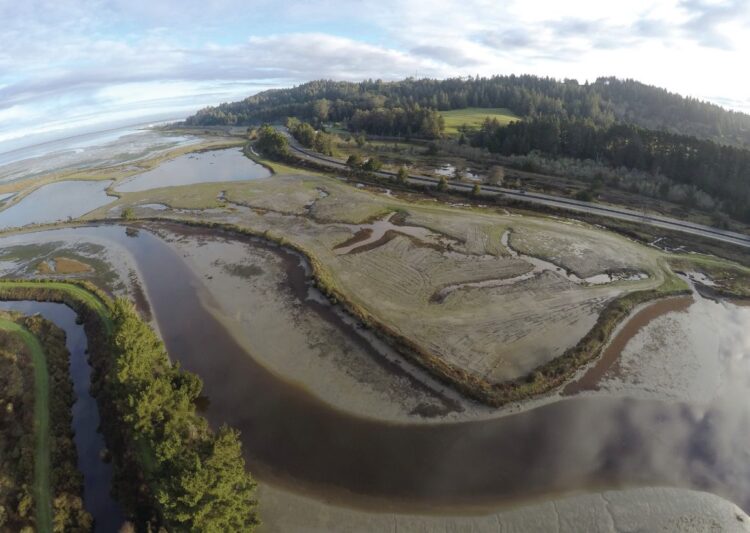 In addition to being the first project in Humboldt Bay to tackle a failing levee, sea-level rise and the loss of important habitat by improving infrastructure, the White Slough Tidal Wetlands Restoration Project provides a resilient living shoreline and flood protection for ranchlands and roads (part of US 101). This pilot project would become a team effort, spanning five years, two project leaders, three project managers and many other dedicated professionals.

The project consists of 41 acres on the Humboldt Bay National Wildlife Refuge and is managed by the U.S. Fish and Wildlife Service. It began in 2014 shortly after a tide breached the dike in the area, threatening to convert critical marshland to mudflats.

“We knew we needed to take action right away,” says former refuge manager Eric Nelson, who, along with Service civil engineer Conor Shea, developed the initial design in 2012 prior to the breach.

The first step was raising water-surface elevations to levels that would support marsh vegetation and then breaching the dike around the unit. Surface elevations were raised by placing up to 180,000 cubic yards of clean sediment along the project site. After the fill-soil was placed, portions of the levee were lowered to tidal marsh elevations, and other portions were left in place to create bird-roosting areas.

“This was outside the box,” notes Ken Griggs, deputy project leader with Klamath National Wildlife Refuge Complex, who was early in his career as a project manager when the project first started. “Instead of trying to push back against nature, the focus of this project was to restore salt-marsh habitat. All credit goes to Eric on that—for being the instigator of this project. Being five years removed from it and looking back, I learned a lot about how to get conservation done on the ground with lasting change.”

White Slough had many players, partners and challenges along the way. One of the bigger challenges was finding enough and the right type of fill or soil.

“That was the hardest part: finding the right sediment and bringing it to the Bay,” notes Shea. And quite a challenge it was. 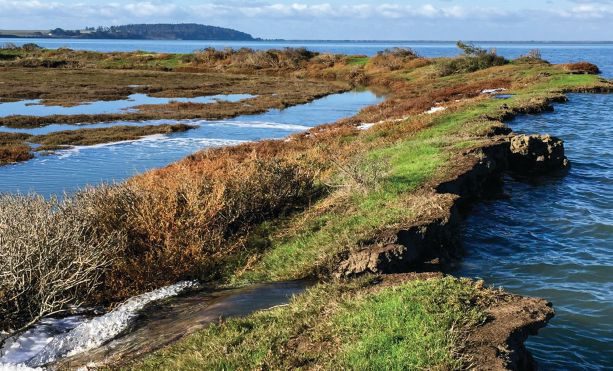 A photo shows the dilapidated condition of the north dike at a high-tide pre-project. Wave-driven erosion of the dike created fissures that allowed overtopping during high-flow events, causing it to flood the brackish marsh with salt water. Without some form of repair or restoration action, the dike would have eventually breached, flooding the protected areas behind it. (Eric Nelson/USFWS) 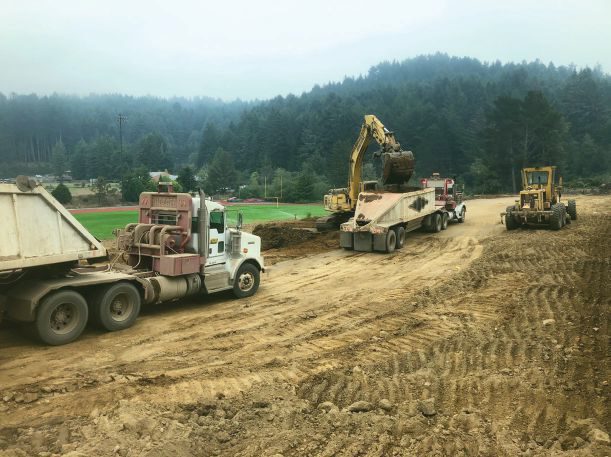 Fill from College of the Redwoods is loaded to be moved to White Slough.( USFWS) 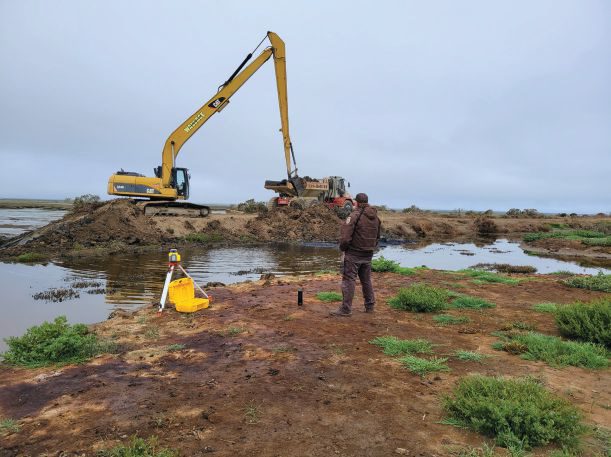 “Cost of trucking dirt over long distances is expensive, so we had to try and secure sources of material relatively close by,” explains Steven Lewis, engineering equipment operator for the full duration of the project and a 40-year Service employee. “By a stroke of luck, there was a large-scale restoration project at the mouth of the Eel River: the Salt River Restoration Project that brought in quite a bit of material. At the same time, we weren’t 100-percent happy with that, because it contained invasive plants we had to get rid of; but beggars can’t be choosers. We got sediment from the Morgan Slough Restoration Project that was from a golf course, so the material came in loaded with golf balls. Good material, but it had golf balls in it.”

According to Nelson, with Morgan Slough in particular, “it truly was a win-win, as they had material they needed to get rid of and instead of having to go to landfill, we were able to use it.”

Kurt Roblek, project manager for the later stages, agreed it was challenging. “Every year we were working different angles to find enough fill material,” he says. “All donor materials needed to be tested for contaminants to ensure the right fit for the ecosystem. We could find it, but there were lots of checks and balances. Ultimately, we persevered, and there wasn’t one year we didn’t have enough material.” 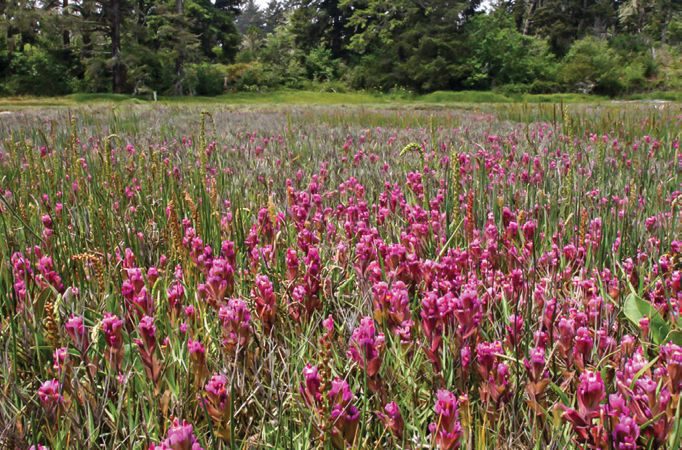 Humboldt Bay owl’s clover is a rare salt-marsh annual that’s hemiparasitic (is both parasitic and can photosynthesize). It grows in the high marsh and can be expected to occur in the restored marsh at higher elevations. It responds well to disturbance and occurs densely in the first few years after restoration.( Andrea Pickart/USFWS)

According to the many Service professionals who worked on this project, the White Slough project succeeded due to its partners and the Maintenance Action Team. In addition, according to Shea, the Service’s Coastal Program provided engineering analysis, prepared design plans and helped refuge staff implement the project.

The Maintenance Action Team, which was critical to getting the project to the finish line, had two main components: first, it saved money by using maintenance employees from across the Service, including San Luis, Klamath Basin, Sacramento and Kern National Wildlife Refuges; and second, it allowed for valuable experience and training for employees with a seasoned instructor in Lewis.

“The Maintenance Action Team was a key part of the project,” notes Nelson. “It made a huge difference physically and financially getting the project done; a real team aspect and a great model for refuges to use. As budgets get tighter, it makes sense to spread the resources around.” 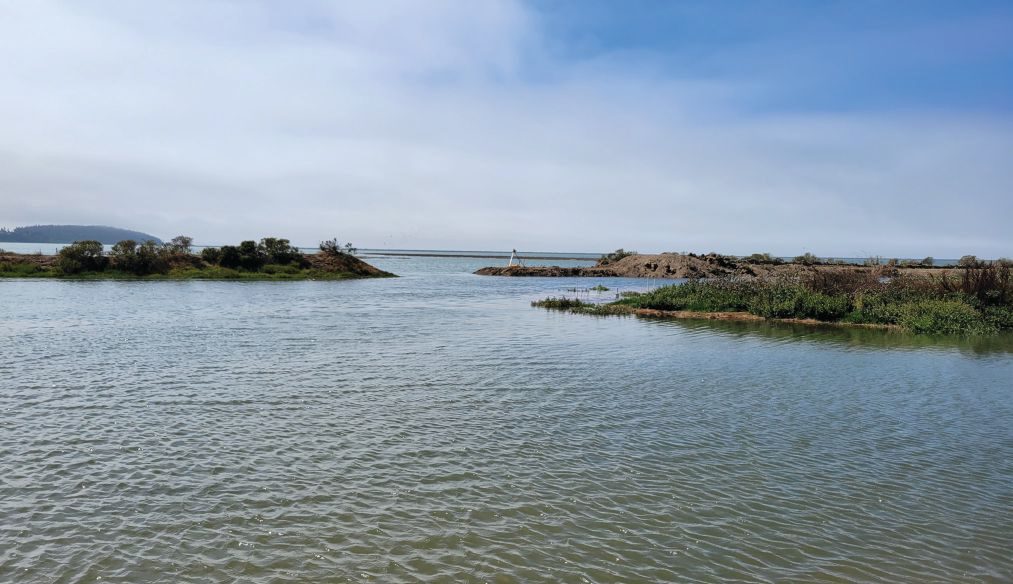 “Some inexperienced operators gained a lot of ‘seat time’ in a short period,” adds Lewis of the Maintenance Action Team effort. “We had a couple examples of guys who showed up with literally one hour of seat time on a bulldozer, and they were immediately working 60 hours a week pushing dirt. So it was trial by fire, but a great opportunity to gain some real-life experience.”

And with funding tight, work from partners such as the California Coastal Conservancy and Humboldt County Resource Conservation District was critical to keeping grants moving through completion of the project and with continued maintenance for invasive species post-project completion.

“This was a massive team effort,” notes Brendan Leigh, the final project manager for White Slough. “The budget was one whole challenge. We had amazing people like Joel Gerwein and Julia Elkin finding and procuring grants to fund this project. Having buy-in from other refuges to participate in maintenance team projects was a huge cost savings and just an all-around benefit to the project and team.” 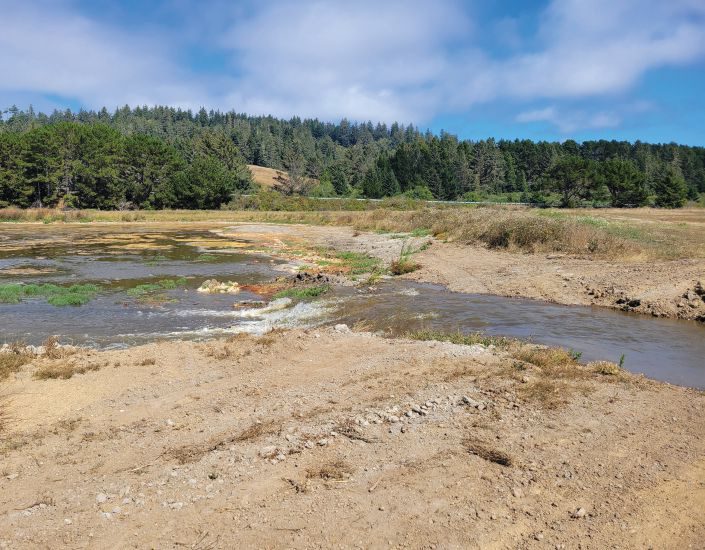 Water from Humboldt Bay enters a portion of White Slough for the first time, filling a series of tidal ponds near the outlet of the newly reconnected Chism Creek.(Jill Demers/Humboldt County Resource Conservation District)

“Knowing this is a part of making our community more resilient to sea-level rise and all the different forces that climate change might throw at us in terms of storm events, wave over-wash and the whole gamut in the coastal system, it was pretty exciting to be part of,” says Jill Demers, executive director for the Humboldt County Resource Conservation District. “It also provides security for our highway [US 101], the main artery to our connection to the rest of California in Humboldt Bay.”

Funding was made possible due to the state’s Executive Order B-55-18 using a “cap and trade” approach with a goal of carbon neutrality by 2045. The U.S. Geological Survey was brought in to monitor carbon neutrality for the project, including two more years after completion into 2023.

“It provides a huge opportunity for ecosystem restoration across the board,” explains Karen Thorne, a research ecologist with USGS of the “cap and trade” process to secure funding. “Standing something like that up fairly quickly is exciting, because it is leading the country and the world on how to do this.”

According to Jenny Curtis, a research geologist from USGS, this project required monitoring when many projects often do not. “We’ve been trying to call attention to that for decades,” she says. “We need to monitor this so we learn from it.”

Gerwein, the south coast deputy program manager with the California Coastal Conservancy, felt the partnerships aligned well with their mission.

“One of the key parts of our mission is to restore coastal natural resources, work on sea-level-rise adaptation and climate-change adaptation,” adds Gerwein. “Working with our refuge partners is a great way to carry that out. The refuge staff was willing to be innovative with piloting this project.”

With more than 90 percent of salt-marsh habitat gone from Humboldt Bay, this project also was critical to provide the habitat diversity necessary for a variety of species to survive, including migratory birds such as sandpipers, egrets, ducks, geese, gulls and other shorebirds.

“It is revolutionary—one of the first projects of this type on the entire West Coast and to this scale almost anywhere,” notes Leigh. “While it only accomplished 41 acres of much-needed salt-marsh habitat, on a broader scale it provided an example of what it takes to accomplish something like this. That is why documentation is so important, so other entities hoping to undergo similar projects will have all the information going into it that we learned along the way.”

Cashell Villa, project leader at Humboldt Bay National Wildlife Refuge Complex, was pleased to wrap up the project on her watch and knows well the importance of salt-marsh habitat.

“They provide important functions for ecosystems and species, and they also provide a buffer from the ocean as well,” explains Villa. “It’s important to think about what salt marshes do for us. What would happen if a bunch of little salt marshes started popping up around here because we’re restoring them? Could they provide some protection to our communities that are inland? We’re definitely looking at that and how we can build more resiliency for Humboldt Bay. The Bay is going to be severely impacted—especially these very low-lying areas—from sea-level rise in the future, so looking at some of these successful models may be one important step in the right direction on how we as a community can move forward.”