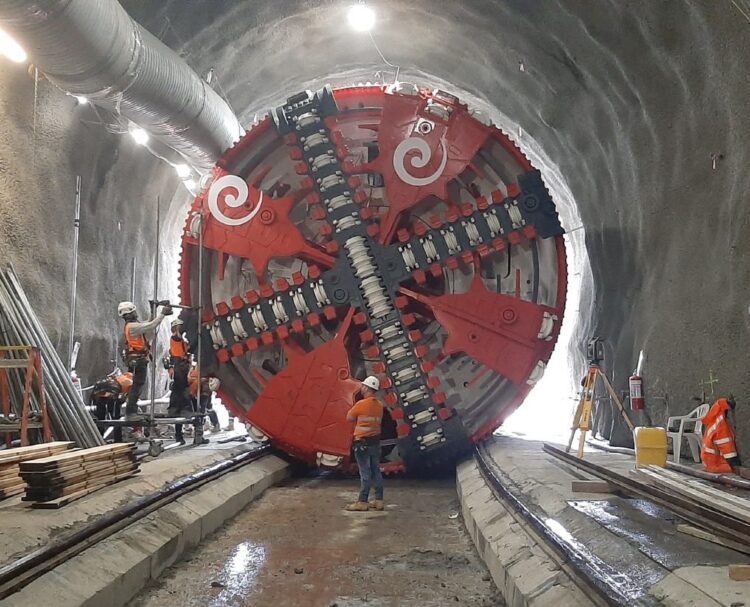 The survey team was instrumental to building the initial 50-m-long tunnel portal for the TBM and then ensuring it stayed on the right path during boring.

What often gets lost in the gloss of large construction projects are the small, precise elements that lead to the high-profile finish––the nitty-gritty details surveyors meticulously measure, set out and measure again to ensure buildings are straight, floors are level, tunnels are the right shape, and railway lines are correctly aligned.

But surveyors are used to succeeding in the shadows––sometimes literally. Nearly 40 meters below Auckland, the survey teams with Link Alliance have been guiding the successful build of New Zealand’s first underground rail network for the last two years.

The largest transport infrastructure project ever to be undertaken in New Zealand, the $4.4 billion NZD ($3.2 billion USD) City Rail Link (CRL) will build a 3.45-kilometer twin-tunnel underground rail link up to 42 meters below the city center. The twin tunnels will vary in depth, so two different construction methods are required: 1) cut and cover where the tunnels are dug from the surface, and 2) mined tunnels using either excavators or a 7- by 7-meter tunnel boring machine (TBM). Crews also will redevelop two existing stations (Mt. Eden and Britomart) and construct two new underground stations (Aotea and Karangahape). When complete, the CRL will carry up to 54,000 people an hour, moving the equivalent capacity of three Auckland Harbour Bridges or 16 extra traffic lanes into and through the city at peak times.

“As surveyors, we’re like the hunters and gatherers; we collect a lot of data and provide it to many teams,” says Sam Williams, surveyor manager with Link Alliance, a group of New Zealand and international companies building the CRL. “And it needs to be good data because the success of this entire project rides on the exactness of our survey points and measurements. We have to be right all the time.”

To Williams and his survey crew’s credit, their survey marks have been right 100 percent of the time since they first arrived onsite in September 2019.

“With the accuracy, automation and user-friendliness of our gear, and the skills of our team, we’ve been able to work smoothly and quickly to keep everyone on track without sacrificing tight control, process or precision,” says Williams. 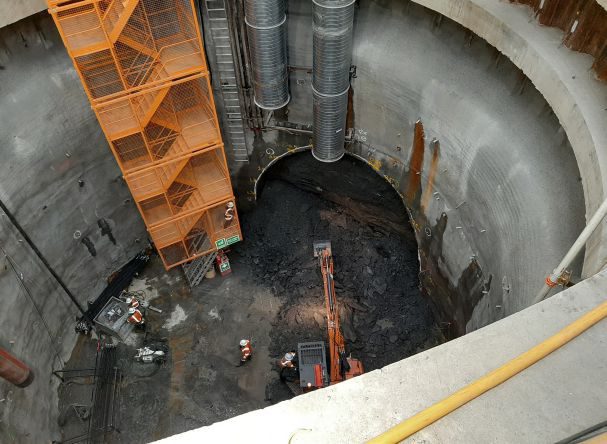 Looking down into the Karangahape tunnel entrance shaft from ground level.

The first critical element they needed to get right was the primary survey control network—no easy feat given the project extends through three suburbs, and principal construction would run through the heart of Auckland’s built-up central business district (CBD). Unlike previous projects where tunnel survey teams set up their own control networks, Williams wanted to establish a high-quality primary control network that also could be used for the entire project.

Setting up on the summit of Mt. Eden 4 kilometers south of the CBD, Williams used Trimble R10 GNSS receivers to verify the Land Information New Zealand (LINZ) continuously operating reference station (CORS) at the port of Auckland and established that as his base station. He then carried out static GNSS observations on three existing LINZ datums and verified those accuracies. 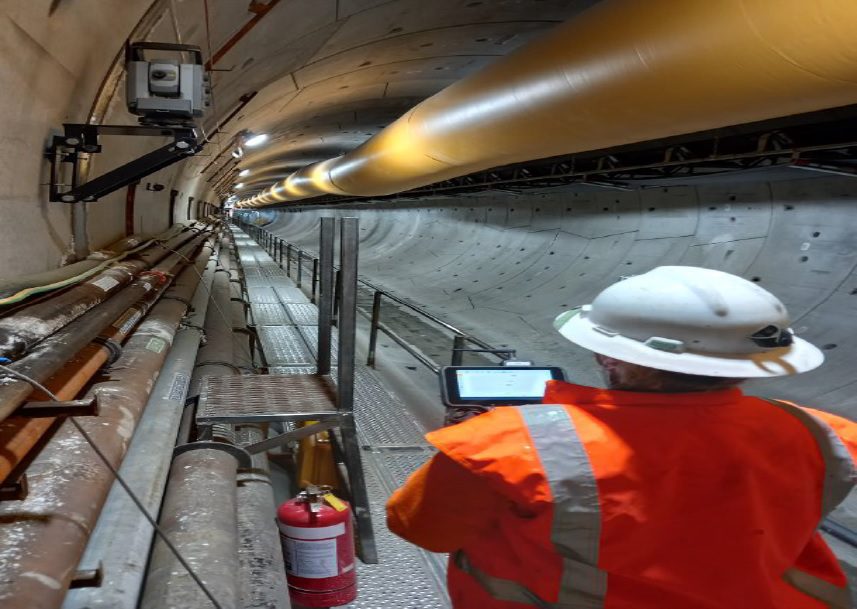 The Trimble S9 was used to establish survey control points for the TBM (tunnel boring machine)
guidance system to ensure the tunnel was built in the correct direction, accurately.

Satisfied with that foundation, he performed a series of four- to six-hour observations with R10 receivers to extend the GNSS campaign to marks more relevant to the project. They established two new marks at each of the three project stations visible from the summit of Mt. Eden––two of which were at heights of 10 stories and six stories. After the GNSS survey, Williams performed terrestrial observations with the Trimble S9 total station on the same intervisible marks to further improve the horizontal accuracy. He then input those measurements into special software to more accurately compute each station’s coordinates, ultimately creating a primary network baseline precise to 1-2 millimeters.

For vertical control, Williams performed a 10-kilometer level run with the Trimble DiNi 03 level, measuring from the base of Mt. Eden down through each station and back again with an impressive misclosure of 4 millimeters.

“The S9, DiNi and software network adjustment were game changers for this,” says Williams. “The long-range fine lock allowed us to measure and establish a 3-kilometer baseline, in a built-up city environment, with a single prism at 1- to 2-millimeter accuracy. Pairing that with our vertical control results gave us the confidence that when we took that network down to street level and created secondary construction control for the guys onsite, our tunnels and stations were going to tie in perfectly.”

In the tunnels, the teams have been setting out targets at set intervals––every 80 meters inside the TBM tunnels and 50 meters inside the mined tunnels––and then building a secondary network off those to fill the gaps and provide control on both sides of the tunnel. With those primary and secondary control networks, Williams maintained site control at the surface and in the tunnels at 3 millimeters or less. 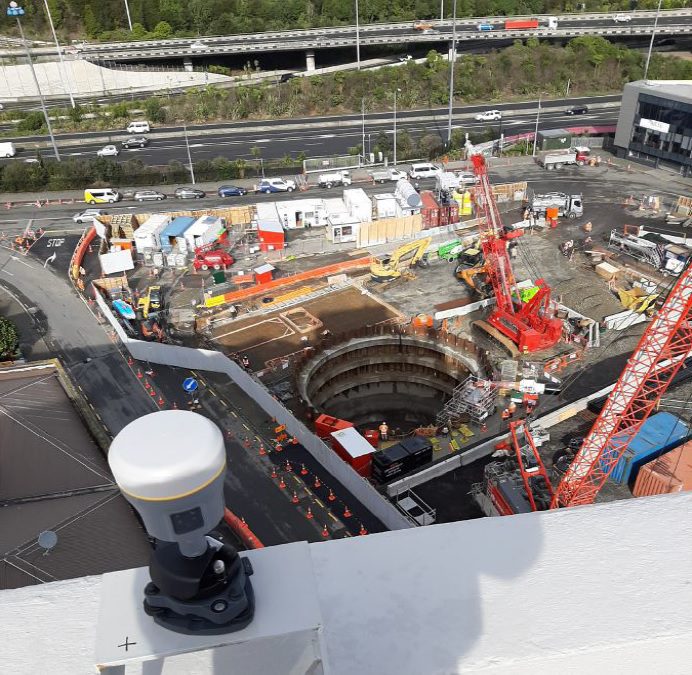 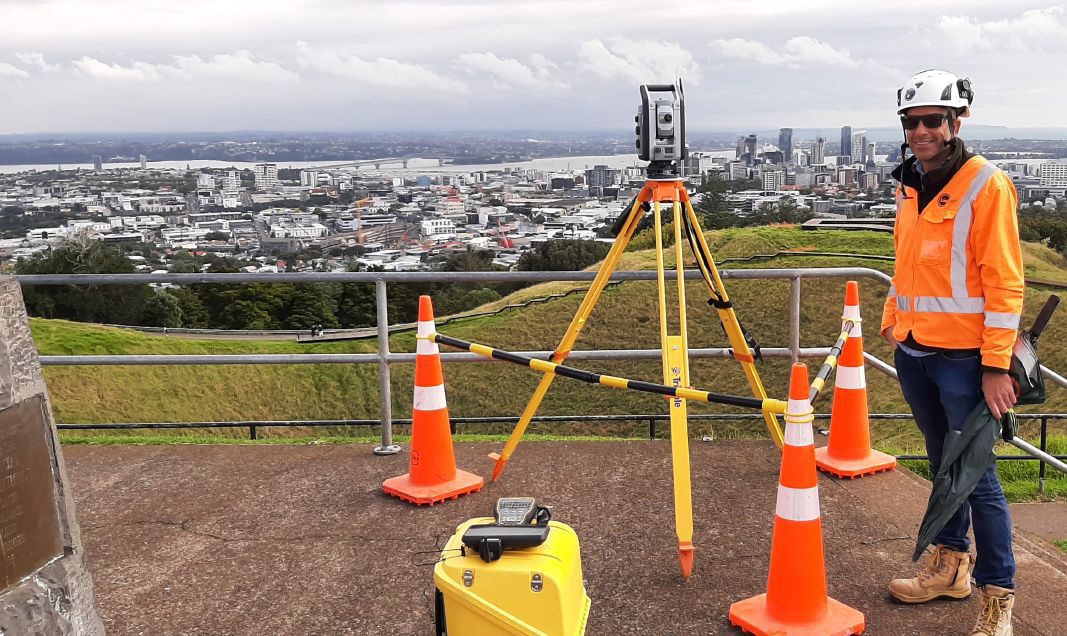 Establishing above-ground survey control with a robust traverse network in preparation for the start of tunnel construction.

Whether setting out, confirming earthworks, guiding machines, marking bolt locations or capturing as-builts, life in the tunnels has been ruled by cramped quarters and a “hurry up” mentality.

“Nothing advances without our survey support or confirmation, but mine tunneling is very production focused, so the tunnelers want you in and out as fast as you can,” says Darrell Wymer, Link Alliance’s tunnel survey manager. “Once an excavation or shotcreting is deemed complete, we need to scan the cut and check that against the design model stored on our Trimble TSC7 controller to identify any underbreaks or overbreaks. From that scan, we need to produce a point cloud to support the geologist’s geological mapping and create reports that show conformance to design for the construction, engineering and client teams––all in less than an hour. So we’re under significant pressure to perform our work accurately without causing great delay to the tunnelers.”

They began to relieve some of that pressure in February 2021 when they acquired the Trimble SX12, a total station and scanner combination that can scan a full dome at 100 meters with a point density of 0.1 meters in 11 minutes, offers a 1.6-second total station measuring time in prism mode, and can pinpoint a 3-millimeter-diameter spot at 50 meters with its green, eye-safe laser pointer.

“With tunnels, you need both total station and scanning functionality,” says Williams. “With a total station/scanner combination, we have both in one unit. That alone saves us hours in the field because we can do our setouts, volume calculations and as-builts from one setup. And because the scans are automatically georeferenced, it saves us significant time in the office as well.”

The ability to perform multiple functions from the same setup boosted their efficiency, precision and speed, particularly at Mt. Eden and Karangahape, two of their busiest work sites.

For the Karangahape station tunnels, teams sunk a 25-meter-diameter shaft 25 meters deep and then tunneled 20 meters east and west to provide launch points for excavating the station’s 278-meter-long rail tunnels that include 203-meter-long platforms. As the two excavators and road header advance, survey teams use the SX12 to guide the excavation, set out rock bolts and confirm shotcrete layers.

“With the total station/scanner, we can monitor the earthworks in real time, and confirm excavation and shotcrete accuracy on the fly,” says Williams. “Once teams get to a certain advance point, we set up and guide the last pieces using the instrument’s quick scanning and calculating functions in special software. When that’s done, we scan the finished excavation, compare it to the design model on our controller, and then scan the first layer of shotcrete. Then with the software, we can use the previous excavation scan to produce a heat map that’ll indicate areas that don’t have proper thickness, and they can top it up with shotcrete. It removes any need for post-processing in the office and keeps us moving.”

At Mt. Eden, speed and agility have been particularly critical. As the first launch point for the 130-meter-long TBM, teams first needed to create a 50-meter-long tunnel to set the TBM on the right course for its 860-meter journey to Karangahape station. In parallel, they began building three tunnels––each at different directions and heights––and constructing twin rail lines that will tie-in to an existing line. The functionality of the SX12 enabled a two-person crew to handle the aggressive workload.

“The ability to seamlessly switch between surveying and scanning cut the time we need to be at the face checking and collecting data by 60 percent,” says Wymer. “We can collect a polygon scan of a tunnel face in about two to three minutes, and that’s including photos. That speed allows us to be so much more responsive.”

The confidence in knowing they’ve captured all the points they need at each setup also has been a boon.

“Usually we’re about 10-15 meters away from whatever we’re surveying,” says Williams. “With traditional terrestrial total stations, we produce reports every 500 millimeters in chainage and every 300 millimeters of profile around the tunnel. Measuring each of those points manually takes a long time. With scanning, you pick up every surface in its entirety at 95-percent accuracy, and you capture it all in minutes.”

Equal to the versatility and efficiency of their instruments has been their software functionality, particularly the TBC tunnel module where all the tunnel design and as-builting happens. Wymer has been using the specialized software to create three design profiles: one for excavation, one for the shotcrete lining and one for the final concrete lining––a process he needs to repeat for each tunnel section. All those models are exported to the controllers for field crews to support the excavators and roadheader guidance systems as well as to guide, monitor and verify all the construction work such as installing the reinforcement layers.

And sometimes, because of the dynamic nature of the tunnels and the geologic composition of rocks, Wymer had to be ready to respond to urgent requests for design model changes.

“There have been times when they’ve hit bad rock, and the geologists called for a design change,” he says. “That means we have to generate a new design by the time the next cut is complete. On a good day, we may have six hours to make changes to the profile and adjust bolt positions, but if the call has been made overnight, we’ll often only have an hour to turn it around. With the scan detail and automation and bulk data import features in TBC, we can meet these tight timelines so crews can keep working at speed.” 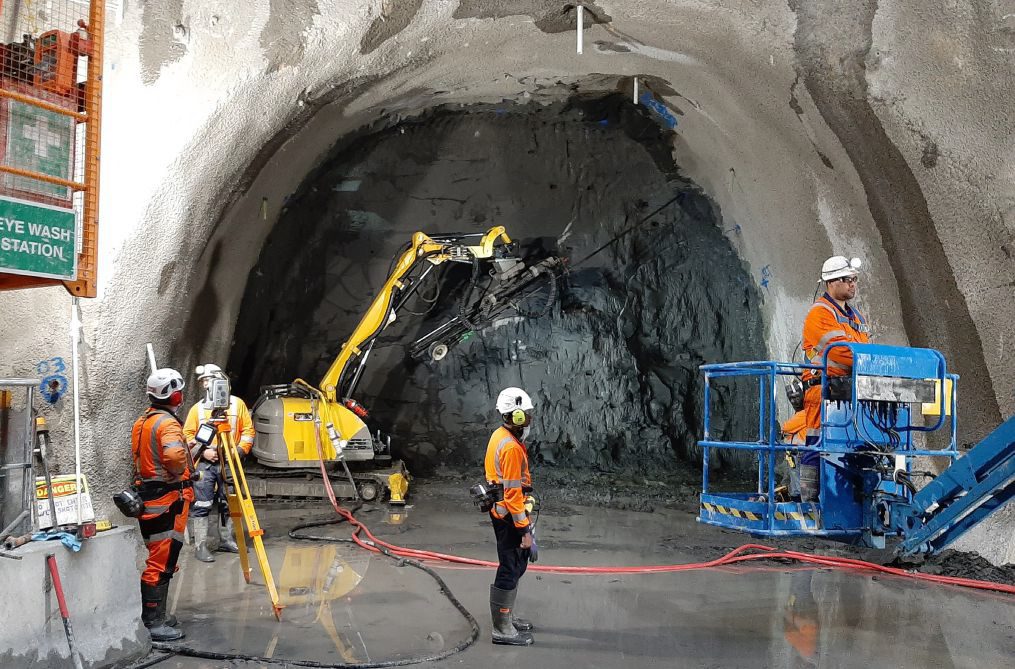 Working in dark isolation can make it difficult to see the light at the end of the tunnel, but crews received their first validation that the CRL is on track on Oct. 16, 2021, when the TBM broke through at the Karangahape station site––right on target. It was a significant milestone and nod to Williams and his survey crews, giving them the confidence that their process, precision and tight control will serve the team well in their drive to complete the project by 2024. 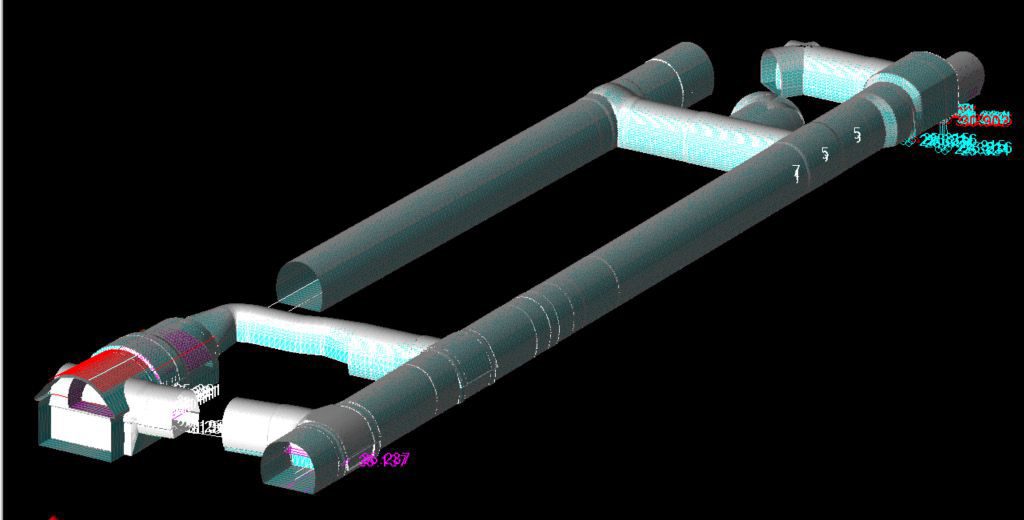 Trimble Business Center software was used to prepare the design data for field crew stakeout, and for QA/QC reporting during the construction process.

“I’ve never been on a project of this scale, for this length of time, and not had some sort of survey incident,” says Williams. “That’s a great testament to our team and technology.”

It’s also a testament to survey crews who sweat the small stuff to achieve a big reward.

Mary Jo Wagner is a freelance writer & has been covering the geospatial industry for 25 years; email: mj_wagner@shaw.ca.