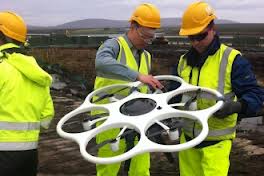 The year 2014 has just started and the company Aibotix from Kassel presents its new version of the Aibot X6, the Aibot X6 V2, just on time for the new year. After having sold more than 150 copters worldwide, Aibotix starts off to the second round and puts on the market the second version of its hexacopters Aibot X6. The completely new developed Aibot X6 V2 provides essential improved functions which enable especially a much easier and safer handling. It also offers to the customers a wide spectrum of adjustment and expansion capability.

“We are proud that we can present our Version 2 at the beginning of this year. The Aibot X6 offers many novelties and progressions which extent the spectrum of applications many times over”, Jörg Lamprecht, incorporator and general manager of the Aibotix GmbH.

With the extension of the autonomous take-off and landing function the handling of the Aibot X6 becomes even easier than it was before. Now it is possible to start and land the Aibot by one touch of a button. At the same time the copter can be flown in a training mode, so the Aibot cannot leave the virtual cage. Besides fully autonomic waypoint flights the Aibot X6 makes it possible to set waypoints during a flight. This offers undreamed-of possibilities to the pilot in the manner of object inspection. The Aibot X6 V2 is not only perfectly prepared when it comes to current requirements but also provides a standardized interface for the integration of different measuring instruments and other sensors. Through this the copter is prepared for a highly detailed real time kinematics (RTK) GNSS-receptor in order to offer the pilot a not previously known accuracy concerning the direction and steering of the copter. The Aibot X6 V2 is immediately applicable. Due to a fully automat ic calibration the pilot only needs one touch of a button to start the motors and he can begin with the flight in no time at all. Furthermore, Aibotix improved the load capacity by increasing the payload from 2.5 kg to 3 kg. With this feature Aibotix succeeded an enormous development impulse. At the end of 2013 some customers already ordered one of the new Aibot X6 V2 version and the copters are already delivered. The customers are thrilled about the new features of the product and are looking forward to the extension of the application opportunities.

“The newly developed Aibot X6 V2 offers a completely new range of new and improved functions which make the copter easier to control and safer. We are overwhelmed.” Rüdiger Wagner, Leica Geosystems.

The production currently goes full speed in order to serve the customers’ inquiries. The development goals for the upcoming year are already set: The main focus will be on the extension of the great amount of automatism and the sensor technology. An example for this would be the RTK-GPS, the Collision-Avoidance-Function or the Teach-In- Technique.

The Aibotix GmbH was founded in 2010 in Kassel and develops and produces high quality intelligence multicopters. August 2011 Aibotix put on the market a new generation of multicopters. The high degree of automation and first class components make the Aibot X6 to what it is – a premium copter which provides individual and high automatic solutions for all application areas. The Aibotix GmbH has its headquarter in Kassel and employs 35 collaborators. Aibotix is globally present and offers their customers personal consulting and support worldwide due to its partner network as well as the opportunity of testing and purchasing the Aibot X6.