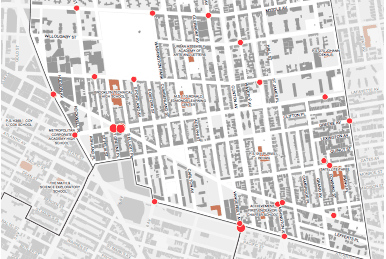 Online crowdsourcing maps with Shareabouts are a good way to engage residents in identifying problematic pedestrian locations. Each board can have its own map, open for anyone to identify intersections where they feel unsafe or see others at risk. Residents can explore locations added by their neighbors, and use the site to leave comments and additional information.

Using online maps to gather input about dangerous streets will bring the same double benefit: community boards will be able to provide neighbors, the Borough President, Council Members, DOT, and media with detailed information; and everyone who participates is engaged in creating a safer city. Boards won’t be dependent on a few clued-up transportation committee members to come up with a list of locations.

Resident contributions are one piece of information that’s necessary to make streets safer. As input comes in, board members can overlay reported troublespots with crash data, near-miss reports, and other useful context like schools, subway entrances, and DOT proposals. Boards can generate reports, showing a list or map view, and locations can be prioritized by urgency.

Giving each board its own Shareabouts safety map is a model for greater community involvement in other issues, like prioritizing capital spending and dealing with liquor license applications. Many community boards rely on paper district maps and are not equipped with the digital tools they need. Shareabouts maps for Vision Zero aren’t just going to be transformative for streets and pedestrian safety, they will move community boards and citizen engagement into the modern era.