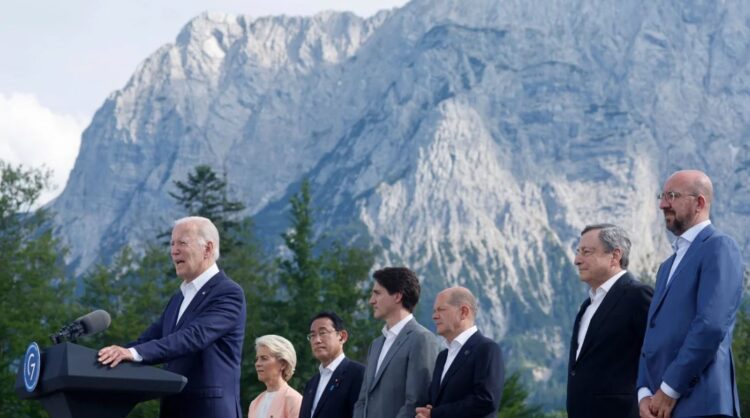 President Biden appears with other G7 leaders on Sunday, as a summit at Elmau Castle in the German Alps gets underway. Biden announced a $200 billion U.S. investment as part of a global infrastructure project by major democracies to counter China’s investments in developing countries. JONATHAN ERNST/POOL/AFP via Getty Images

President Biden announced on Sunday that the U.S. will mobilize $200 billion dollars of investment in global infrastructure projects in the next five years, as part of an effort by the world’s leading democratic economies to counter China’s Belt and Road Initiative. The overall investment, including G7 partners and private capital, aims to hit $600 billion over the next five years.

“This isn’t aid or charity,” Biden said, flanked by other G7 leaders on the sidelines of the summit in Germany. “It’s an investment that will deliver returns for everyone, including the American people and the people of all our nations.”

The announcement is an official launch and a rebranding of what had been rolled out last year at the G7 in the UK as “Build Back Better World,” a play on Biden’s domestic proposal that would have reshaped the U.S. economy but foundered in Congress. The effort is now called the Partnership for Global Infrastructure and Investment, or PGII.

Comments are disabled
NEXT ARTICLE
Video: Why TRAC Matters
June 27, 2022
PREVIOUS ARTICLE
Bentley Systems Recognized among the 50 Most Community-minded Businesses in the Greater Philadelphia Region
June 27, 2022