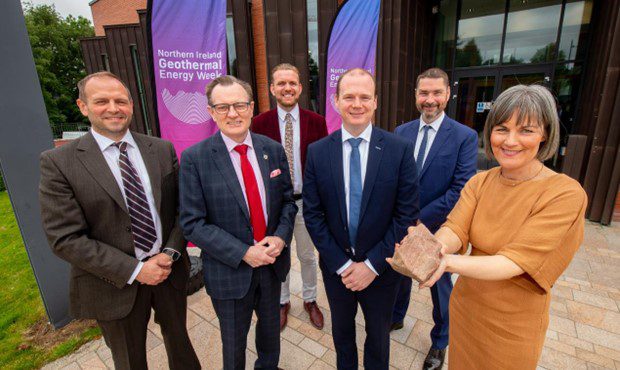 Professor Mark Palmer and Joseph Ireland from Queen’s University Belfast have been working on a new landmark report for the Department for the Economy and the Northern Ireland Geothermal Advisory Committee.

Future geothermal energy use is considered key in decarbonising Northern Ireland’s heat sector as it is a clean and naturally occurring source of energy. It uses the natural subsurface as a source of heat and has the potential to provide cooling and seasonal storage of energy.

Launched as part of Northern Ireland Geothermal Energy Week, the Queen’s University report offers detailed recommendations for the way forward and focuses on the confidence-building actions needed to unlock the opportunities for energy from geothermal heating and cooling.

Professor Palmer from Queen’s Management School comments: “Despite over forty years of geological evidence gathering, which confirms that Northern Ireland has favourable geological conditions for geothermal activity, the findings of our report show an absence of awareness and visibility of the geothermal project activity on the ground. There is a real positive opportunity for portfolio-driven energy market-making here.”

Joseph Ireland, a PhD student at Queen’s and co-author of the report, says: “Geothermal technology is underdeveloped in Northern Ireland but it could be the invisible secret to unlocking the energy sources we need to help meet net zero targets by 2050. This report and its recommended actions highlight ways to build sector confidence, create awareness and establish the link between the potential of geothermal energy and how projects could work on the ground.”

“My Department’s Energy Strategy, The Path to Net Zero Energy, recognises that there is no single technological solution to decarbonising our energy mix and that, with its proven history globally, geothermal heating and cooling has a role to play in achieving our vision of net zero carbon and affordable energy.

“We are already leading in the technology around wind, and we will reinforce this with other technologies such as green hydrogen – so not only will we be self-sufficient, but we will be able to export these zero-carbon technologies, created and manufactured locally.

“One of the guiding principles of my 10X economic vision is to support a greener, sustainable economy. With our globally recognised track record in advanced manufacturing and engineering, I am excited by the prospect of harnessing carbon-neutral energy sources such as geothermal energy.”

A series of events took place at Riddel Hall and online during Northern Ireland Geothermal Energy Week (#NIGeothermalWeek), which ran from Monday 13 June until Friday 17 June.

The sessions included discussions with the Economy Minister, Queen’s University’s Vice-Chancellor Professor Ian Greer and key speakers from the International Geothermal Association, the European Geothermal Energy Council and Geothermal Rising in the USA.

As part of the activities, key stakeholders and attendees visited Scrabo Quarry Area of Special Scientific Interest. A visit to two sites at Queen’s University that are already in the process of utilising geothermal energy also took place.