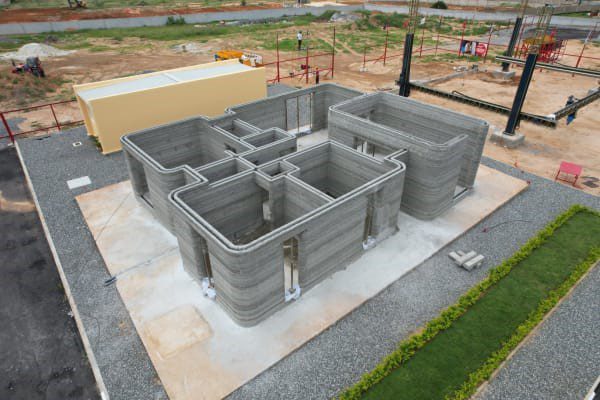 Caption: In the front: the second and larger 3d printed building 3D printed 4,5 times faster compared to the yellow building in the background, which was Power2Build’s first 3D printed house. Image courtesy: Power2Build

The house is the second 3D printed residential building in Angola. It is a 140 m2 house that holds a suite, two bedrooms, three bathrooms, a dining room, and a living room. As the three bathrooms indicate, this is not a social housing project, but rather a house showcasing the design and architectural possibilities of 3D printed buildings.

Power2Build printed Angola’s first 3D printed building – a 53 m2 house. This was an incredible milestone, marking the beginning of a revolution, as the house was the world’s first 3D printed house in real concrete (defined by particle size above 8 mm).

While the first house was printed in 48 hours, the second house with 140 m2 was printed in 30 hours. This equates to a 4,5 times improvement in productivity. In addition to this, the team was able to both do the printing, and the water and electrical installations at the same time.

Ricardo Almeida, CEO from Power2Build said: “We are very proud of our progress; people were questioning if we couldn’t print bigger. We have now printed a 2,6 times bigger house and in about 2/3 of the time compared to the first house. We improved the speed of execution remarkably, but still believe there is room for improvement. In the future we will only become better at mastering this technology. We are getting more efficient by the day and closer to achieving our vision to deliver better housing at affordable prices to Angolan families.”

The 3D printed house was done with the D.fab material solution, a ground-breaking additive mix developed by COBOD and CEMEX, that enables printing with real concrete, leading to cost-savings of up to 90% compared to printing with mortars. D.fab enables the usage of 99% locally available materials and only 1% Magic Mix supplied by COBOD. 3D printing with real concrete is a genuine step change in the industry of 3D construction printing and serves as a prominent gateway to properly commercializing the technology.

Commenting on the successful build of the house, Henrik Lund-Nielsen, Founder & General Manager of COBOD International said: “We are proud to have made the technology for this project. Power2Build have increased their speed of execution tremendously compared to their first and now second project. This is a great example of how we and our customers are continuously improving the technology and can build faster, better, and cheaper as our customers and partners become experts at mastering the 3D printing technology.”

COBOD International’s 3D construction printing technology is dominating the market in Africa, which so far has six 3D printed buildings all done with COBOD technology. The company was the first (and only) to print in Malawi, Madagascar, Kenya, and Angola, two of which are schools and four residentials. Later this year COBOD’s customer 14trees will begin printing a double-digit number of houses in Kilifi in Kenya.

Our mission is to disrupt the global construction industry through world class multifunctional construction robots based on 3D printing systems. Faster. Better. Cheaper. We 3D printed Europe’s first building in 2017. Subsequently the first 2- and 3-story buildings in Europe, specifically in Belgium and Germany were made with our technology. Also, the first villa in Dubai and the first buildings in Africa have been done by our 3D construction printers, like the first wind turbine bases. We have an open-source strategy, partnering with customers, academic institutions, and suppliers around the world. Our partners include GE (US), PERI (Germany), Cemex (Mexico), Holcim (Switzerland), Dar Al Arkan (Saudi Arabia), L&T Construction (India), and JGC (Japan). Our vision is to see buildings and concrete structures in every city around the world made by multifunctional construction robots. HQ in Denmark, +80 highly competent pioneers from 20 nationalities and a truly global presence in Asia, Middle East, Africa, Europe, North, Latin, and South America.

Comments are disabled
NEXT ARTICLE
When it Comes to Safe and Sustainable Infrastructure, Better Won’t Arrive Out of the Blue
June 21, 2022
PREVIOUS ARTICLE
Structural Engineers of Illinois Special Award Winners
June 20, 2022