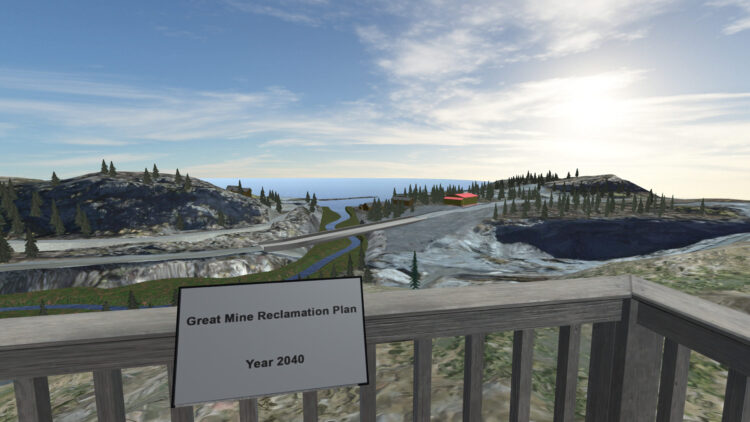 (Vancouver, BC)—Clirio Inc is pleased to have helped Crown-Indigenous Relations and Northern Affairs Canada (CIRNAC) in the creation of its Giant Mine Remediation Project app. Clirio Inc, a Vancouver based company, worked with a multi-disciplinary team of engineers and content developers to build a 3D representation of the complex models in a way that would be clear and easy for anyone to grasp.

To create the app, a variety of data sets were combined, including LiDAR, GIS, CAD and underground measurements to create these presentations. Three-dimensional “table-top” models set the scene for users, followed by a comprehensive under¬ground view of the former mining operation showing the stopes which store the arsenic trioxide and the engineering solution that has been proposed to contain it. This is followed by a depiction of a rising water table and its limited potential to interact with the arsenic due to the frozen ground. Finally, users are transported to the year 2040, and a view of the reclaimed site, complete with restored creeks, covered tailings ponds, and a new water treatment plant. All of this is done using augmented reality (AR) on the users’ devices to best depict the scope and scale of the issues at hand. The new app is free for all Canadians to download (for both iOS and Android phones and tablets), and demonstrates the issues, remediation objectives and planned outcomes for this substantial undertaking.

“Having worked with CIRNAC over the past few years to create holographic visualizations of their project data, we are proud to partner with them to create this app that we feel will be of interest to a many Canadians, as we are all stakeholders in this project,” says Gerald Magnusson, Head of Product for Clirio.

The $1 billion-dollar (CAD) Giant Mine Remediation Project is co-managed by the Government of Canada and the Government of Northwest Territories and involves the cleanup of abandoned gold mine within the municipal boundaries of Yellowknife, NWT. In 1999, the mine stopped operating and Canada became the site custodian, attention focused on the environmental issues left behind. The most notable is the 237,000 tonnes of arsenic trioxide, a byproduct of the gold mining operations, stored in underground chambers.

This technically complex remediation plan requires the understanding and acceptance of many rights holders and stakeholders, including engineers, government officials and the public. This information can be difficult to clearly explain to non-technical individuals. As public engagement is a critical component to this process, a more effective communication method was required to show how the mitigation plans are going to be implemented. This needed to be done in a way that allowed all parties to make decisions based on data and science.

The app was created to help community members, government officials and other rights holders and stakeholders share a common understanding of the challenges and solutions related to this project. They can view inaccessible underground areas with both safety and visually clarity and can see all aspects of the project. Clirio’s work gives CIRNAC a new tool that can help support a meaningful public engagement process in an efficient way that helps avoid unnecessary costs and delays, moving towards approval of the project and mitigation of the risk to the community.

The app is currently available to download for free from the Apple App or Google Play stores. Simply search “Giant Mine Remediation” in your choice of app store.