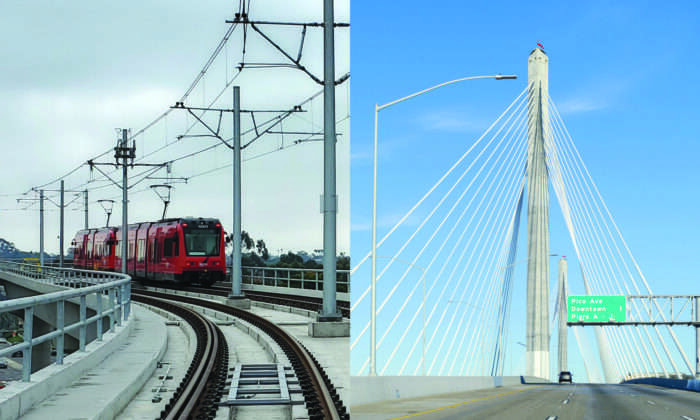 The $2.1 billion Mid-Coast Trolley Blue Line is an 11-mile double-track light rail extension of the University of California-San Diego Blue Line Trolley. The extension, which began operations in November 2021, connects corridor residents with other Trolley lines serving Mission Valley, East County and South County. The Mid-Coast Trolley Extension offers a transfer-free ride from the U.S.-Mexico International Border and communities south of downtown San Diego all the way to the University Community area.

WSP served as the project’s lead environmental and engineering consultant and the designer of record on behalf of the San Diego Association of Governments.

The project included the design and construction of eleven bridge crossings, nearly seven miles of at-grade alignment in or near existing railroad right-of-way, more than four miles of aerial viaduct structures, and nine stations – four at-grade and five aerial. Five of the stations will provide a combined 1,170 new parking spaces.

“The Mid-Coast Trolley Extension is providing critical public transit service and an effective alternative to congested freeways and roadways in a San Diego community that is experiencing rapid population growth,” said Kimberly Jaskot, WSP USA project manager for design services during construction. “We are honored that ACEC recognized this project’s importance and the role WSP played in its design and with a Grand Award.”

The International Gateway Bridge (Gerald Desmond Bridge replacement) is a six-lane, 2,000-foot-long bridge that crosses Long Beach’s Back Channel and features a 1,000-foot-long main span between two 515-foot-high towers. It is the second tallest cable-stayed bridge in the U.S. and the first such bridge for vehicles in California.

WSP provided program management and construction management services on behalf of the Port of Long Beach, overseeing and managing the design-build contract.

Work on the $1.5 billion project began in 2013, 46 years after ground was broken for the previous bridge, which had been designed primarily for use by cargo transport and employees of the Long Beach Naval Shipyard. Over the next half century, bridge use far surpassed initial expectations and the vertical clearance became insufficient to accommodate modern Panamax and New Panamax cargo vessels.

Demolition of the old Gerald Desmond Bridge started in early May.

“The International Gateway Bridge is already having a global economic impact, providing shorter travel times and a reliable connection between one of the world’s most active cargo ports and the U.S.,” said Neal Weitman, national program management/construction management executive at WSP. “WSP is proud to have played a key role the successful delivery of such an important bridge, and are grateful for the ACEC’s Grand Award recognition.”

Honor Award for Structural Systems: The Delaware Memorial Bridge Ultra-High Performance Concrete (UHPC) Pilot Project. This is the world’s first UHPC overlay on a suspension bridge. WSP performed a detailed evaluation in 2018 and determined UHPC provided longer life and better protection. Completed in 2020, it covered the largest area ever attempted in the U.S.

National Recognition Award for Studies, Research and Consulting Engineering Services in Transportation: New Jersey Transit’s first Five-Year Capital Plan. WSP led the effort to prioritize transit investments by identifying, developing and vetting potential projects that will achieve the agency’s vision and goals over the next two decades and create a prioritized set of transit investments across the agency.

National Recognition Award for Energy: York Correctional Institution Central Plant and Chilled/Hot Water Replacement Project. WSP prepared design and construction documents for replacement of the central plant and the water distribution systems at Connecticut’s only women’s correctional facility. It provides a reliable, energy-efficient means of heating and cooling the 22-building facility through an underground piping system across the 425-acre site.

National Recognition Award for Transportation: The City of Wichita East Kellogg Expansion and Improvement Project. WSP, in collaboration with TranSystems, provided design services to improve travel along a vital east-west route through the city along the US-54 highway. The original four-lane divided expressway was replaced with a six-lane freeway, with exits for the new frontage roads and easy access to the turnpike.

The award announcements were made at the ACEC’s Engineering Excellence Awards Gala, widely known as the “Academy Awards” of the engineering industry, held on May 24 in Washington, D.C.

WSP USA is the U.S. operating company of WSP, one of the world’s leading engineering and professional services firms. Dedicated to serving local communities, we are engineers, planners, technical experts, strategic advisors and construction management professionals. WSP USA designs lasting solutions in the buildings, transportation, energy, water and environment markets. With more than 12,000 employees in 200 offices across the U.S., we partner with our clients to help communities prosper. wsp.com