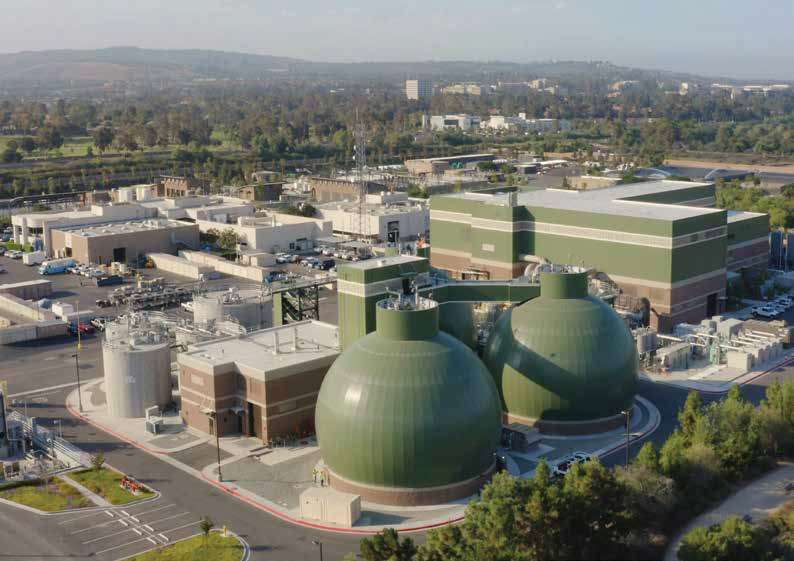 The Irvine Ranch Water District (IRWD) has always set itself apart as a proactive and pioneering organization in mitigating environmental challenges. In the early 1980s, for example, IRWD pioneered what’s now known as “purple pipe” used to convey recycled water for other uses. Purple pipe now is the universal symbol for pipes conveying recycled water, with purple used to distinguish such conveyance from potable water systems.

Paul Weghorst, IRWD executive director of water policy, notes his agency started reporting greenhouse-gas emissions around 2012 when it first created an Energy and Greenhouse Gas Master Plan for the district. “Our distinct values center around environmental stewardship, transparency, accountability and collaboration,” he notes.

IRWD is a not-for-profit local public agency serving residents and businesses in a 181-square-mile section of central Orange County, Calif. Its customer base consists of 447,000 people at 120,000 service connections and swells to 600,000 during the day when businesses are open. The district provides customers with drinking water, sewage collection, sewage treatment, recycled water and urban runoff treatment.

IRWD’s sustainability efforts are focused on three key areas: 1) recycled water, 2) renewable energy and 3) energy storage, as it endeavors to waste as little as possible and re-use as much as possible. The water-energy nexus is the thread that weaves throughout IRWD’s initiatives: it takes energy to produce water, and it takes water to produce energy. In terms of water and energy efficiencies, saving one saves the other.

“There’s energy embedded in all water,” Weghorst points out of the production, pumping, conveying and distribution of water.

To that end, IRWD maintains an Embedded Energy study, which relies on GIS overlays to identify locations of water use with higher energy intensity. The study also enables IRWD to focus on working with those customers in the higher-use areas to reduce water use and control pumping costs. In those cases, customers at higher elevations requiring extra pumping are charged based on actual cost of service, factoring in energy costs in an effort to reduce energy use and environmental impact. 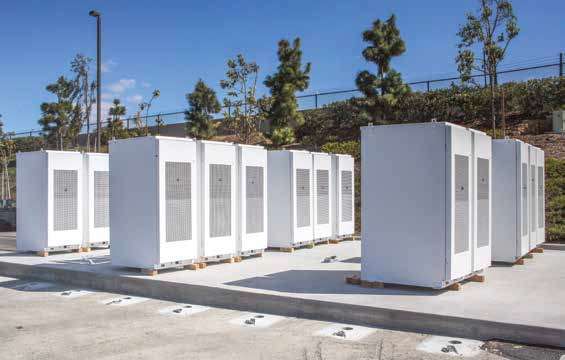 A History of Recycling

IRWD started as a drinking-water provider in 1961, adding sewage collection and treatment services in 1963. IRWD started a recycled water program in 1967, opening up its Michelson Water Recycling Plant (MWRP), and began delivering about 2 million gallons per day of tertiary-treated recycled water to agricultural users. It has expanded with community growth.

Weghorst points out that in California, where droughts are common and water is a precious resource, recycled water is important because it’s drought-proof and saves regions such as IRWD from having to buy expensive imported water from northern California or out of state.

Water flowing through sewers to the MWRP undergoes a multi-step treatment process that takes about 16 hours. It starts in the headworks that screen debris, using grit chambers to remove sand, rocks, grit and other inorganic debris. Sewage then flows via gravity into large settling tanks that serve as the primary clarifiers.

Two treatment processes occur in parallel: an advanced mechanical membrane bioreactor (MBR) process and a conventional activated sludge (CAS) process. Beneficial microorganisms remove nitrogen and phosphorus from the water, which goes through a final disinfection in the chlorine contact tank. The use of ultraviolet light to deactivate remaining pathogens is the last step of the MBR process.

After meeting quality standards, the recycled water is delivered through 572 miles of purple pipeline to more than 6,000 metered connections. Recycled water is stored in four open-air seasonal storage reservoirs to balance seasonal needs. 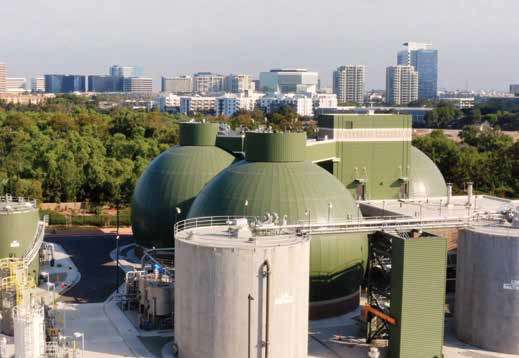 Among its many functions, the IRWD’s water recycling plant helps create Class A biosolids.

Solids and grease removed in the water-recycling process are sent through an underground pipeline to IRWD’s Biosolids and Energy Recovery Facility, which opened in 2020 and is projected to save IRWD and its customers $160 million by 2030.

Solids converted into Class A biosolid pallets are used as a soil amendment. Three methane digesters recover biogas produced in the digestive process, as a scrubbing system purifies the methane by running it through microturbines. Microturbines power one-third of the recycling plant’s energy requirements, with plans to install enough microturbines to produce up to 1.6 megawatts of power.

Sludge is thickened through centrifuges as it travels through acid and methane digester phases. Additional leachate recovered from the process is sent to MWRP and processed into additional recycled water.

“It’s about the right water for the right use,” says Weghorst of IRWD’s initiatives. “Recycled water is not for drinking or for any other uses inside our customers’ homes. But it’s vital to our community’s water-efficiency efforts because it’s reliable, cost-effective and helps keep our customers’ water bills low.

“Almost all the public and commercial landscape in our service area—including parks, medians, college campuses, homeowners’ association properties and golf courses—is irrigated with recycled water,” notes Weghorst, adding that it’s also the source of irrigation for local farms and orchards. 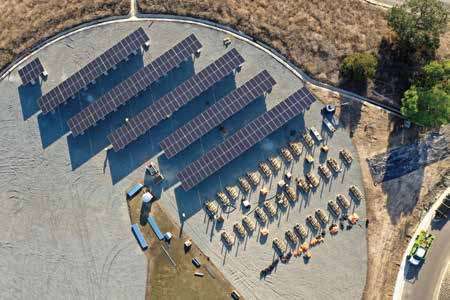 Solar-panel installations on IRWD buildings support the agency’s commitment to efficiencies in the water-energy nexus.

IRWD’s recycled water also is used in cooling towers and for concrete production, composting and dust control on construction sites. It’s used to flush toilets in more than 130 dual-plumbed buildings. The recycled water is even used to make the rinks at the Great Park Ice & FivePoint Arena, a community skating complex and the Anaheim Ducks hockey team training center.

“Recycled water is an effective tool for ensuring water reliability for our customers, because every gallon of recycled water used for watering, flushing, industry and recreation saves a gallon of drinking water,” says Weghorst. “Even in times of drought, our community can remain green and beautiful by irrigating with recycled water.”

Before building the Biosolids and Energy Recovery Facility in 2020, IRWD’s newest major plant project was the Baker Water Treatment Plant in Lake Forest, which was completed in 2016 as a joint regional project by five South Orange County water districts.

Membrane-filter wash water, excess recirculation flows and strainer backwash water are treated and recycled onsite for maximum plant recovery. A Fats, Oils and Grease (FOG) receiving station serves a program to collect FOG from restaurants and other businesses to process into additional electricity. 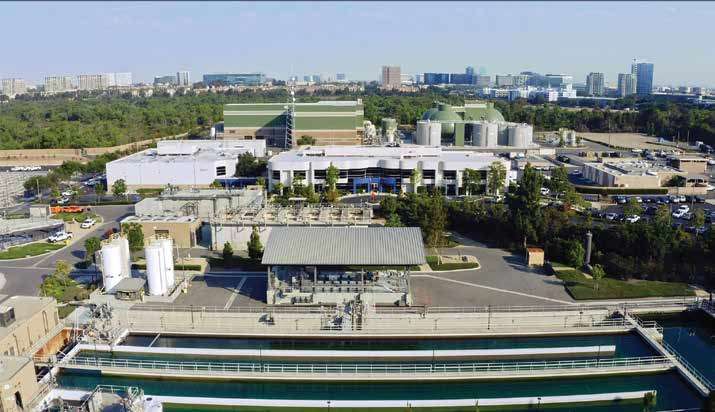 The IRWD recycles water, creates biosolids for other uses and stores energy for off-peak hours.

Additionally, IRWD has one of the nation’s largest networks of high-efficiency lithium batteries that store energy and provide power stored during off-peak hours for district operations. Southern California Edison also uses the energy as a demand response resource to make the energy grid more resilient in high-usage periods.

What the IRWD is doing is setting the stage for future initiatives that transcend its borders to help address climate-related challenges, notes Amy Holm, executive director of The Climate Registry.

“Organizations that become Climate Registered are the leaders in a growing movement to address climate change by managing and reducing emissions at the subnational level,” she says. “We have just over a decade to take action that will ensure we avoid the worst effects of climate change. This kind of leadership is needed now more than ever.”