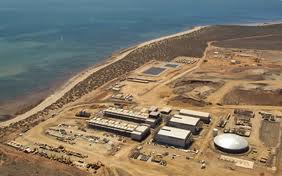 CITIC Pacific Mining has taken a high-tech approach to managing underground infrastructure at the largest magnetite project under construction in Australia, with the development of an industry-first, interactive buried services reporting and mapping system. The company has joined forces with Australia’s leading Geographic Information System (GIS) specialist, Esri Australia, to develop the reporting and mapping system, which instantly reveals the location of buried assets – such as electrical and communication lines – to all stakeholders including its surveyors.

“Whenever there is a need to excavate, it is crucial stakeholders have a precise understanding of what infrastructure exists underground,” Mr Brown said.

“This not only ensures bottlenecks in the workflow are identified, but ultimately minimises risks and ensures the safety of employees and contractors.

“This includes being able to pinpoint the infrastructure’s location using a web map, output to a report map and extracted as 3D data.

“Attributes presented in this tabular report include the type of service, material, size and quality, for example surveyed or as-constructed design.”

Mr Brown said in the past surveyors had to manually search through archives for paper-based maps and multiple versions of design files, which was time-consuming and also susceptible to human error.

“Our team can view data such as electrical, location and access in layers which can be examined alongside other important information such as high resolution photography and above-ground infrastructure.

“Additionally, the system is accessible using a web browser based interface via company Intranet, which enables our surveyors to be on-site marking up infrastructure for our construction teams much faster than in the past.

“The result is reduced pressure on our budget, resources, compliance with our license to operate – and, above all, enhanced safety for our personnel.”

Esri Australia GIS in Mining expert Trevor Smales said while GIS technology was setting a new industry benchmark for safety, many of the world’s mining companies were also beginning to use the technology for new applications such as community engagement.

“With GIS technology, companies can map, layer and analyse a broad range of external data – such as social and demographic statistics, economic and environmental information, or community program development – alongside their own business data.

“This allows them to visually demonstrate the benefits their operations are having amongst the community – by providing evidence of employment increases or infrastructure development, for example.”