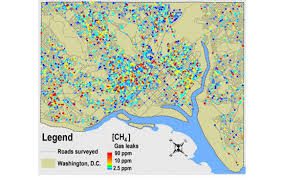 High levels of natural gas are escaping from the aging pipes beneath the streets of the nation’s capital, creating potentially harmful concentrations in some locations, a new study has found. Natural gas leaks pose explosion risks, health concerns and contribute to climate change. The paper, which appears in the ACS journal Environmental Science & Technology, also provides information that could help companies justify additional financial incentives for fixing leaks quickly.

Robert Jackson and colleagues note that natural gas leakage is a serious problem on multiple levels, including an impact on the economy and climate. Property damage is estimated at $133 million annually, and by one estimate, gas customers in the U.S. between 2000 and 2011 absorbed the cost of escaping gas to the tune of $20 billion. And on the global scale, leakage can contribute to climate change. Methane is a potent greenhouse gas — far more potent than carbon dioxide.

But there’s also the potential threat to human life and health. On average, natural gas pipeline accidents in the U.S. kill 17 people a year. Also, methane, the primary component of natural gas, can react with nitrogen oxides and spur the formation of ozone, which can aggravate asthma and other lung conditions.

Figuring out how to put a cap on leaks would mitigate these issues. But first, researchers have to know where the gas is coming from. A previous study the team conducted in Boston mapped out about 3,400 pipeline leaks along the city’s 758 miles of roads. The researchers decided to make a similar map in the nation’s capital.

In January and February 2013, they drove all of the 1,500 miles of Washington, D.C., roads with an instrument that took methane readings close to the ground every 1.1 seconds. They found nearly 6,000 leaks, with the highest concentration of methane at about 45 times what would be expected with no leak.

At 19 sites with high concentrations, the researchers tested the manholes. Some manholes had methane concentrations as high as 500,000 parts per million — about 10 times greater than the threshold at which explosions can occur. Researchers notified the gas company, and a follow-up test in June 2013 found that nine manholes still had dangerously high levels of methane.

The research suggests that the leaks are coming from city’s aging cast-iron pipe infrastructure, which makes up about 35 percent of the city’s main pipes.