/ Buildings / MADGI, JRM Renovate Home of a Quadriplegic Student on NBC’s George to the Rescue Show

MADGI, JRM Renovate Home of a Quadriplegic Student on NBC’s George to the Rescue Show 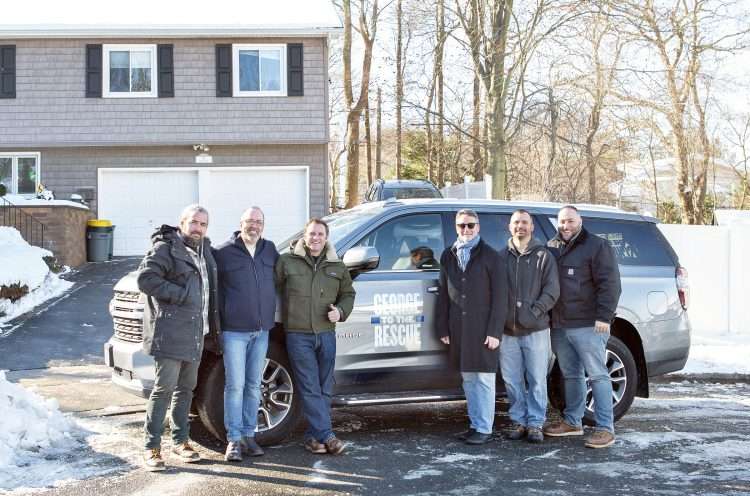 The episode aired on WNBC this month

Hosted by Oliphant, NBC’s Emmy Award-winning human interest/home renovation series has elevated the human spirit while celebrating and showcasing the power of community since 2010. Oliphant’s design-build transformations have supported countless individuals, families, and organizations in need across the United States. The Koltun residence episode will air on WNBC at 9:30am and 7:00pm. All episodes are streamed on Peacock and YouTube.com/George2Rescue. Details on the series and behind the scenes information are available on Facebook, Twitter, and Instagram @George2Rescue.

Oliphant recruited Andersen and JRM to assist with redesigning and rebuilding the Koltun family home to accommodate Rebecca’s accessibility needs upon completion of her lengthy physical therapy. MADGI, JRM, and their team of subcontractors have generously donated all labor and materials for the project.

“Shortly after Rebecca’s accident took place, our phones started ringing. George to the Rescue really wanted to help, but JRM Construction Management and Montroy Andersen DeMarco were the dream team who went above and beyond to make this possible,” shared Oliphant. “Rebecca’s community support has been so inspiring, but the family needed this extra push. It’s an honor to spotlight Rebecca’s resilient spirit and the teamwork involved in bringing the Koltuns back home.”

“Improving the lives of individuals, especially those with mobility and other special needs, is one of the main responsibilities of design and architectural professionals. We were delighted to join George Oliphant and the excellent construction team of JRM in this undertaking. The enthusiastic support of the community and the building crew for this project has been incredible,” said Andersen. 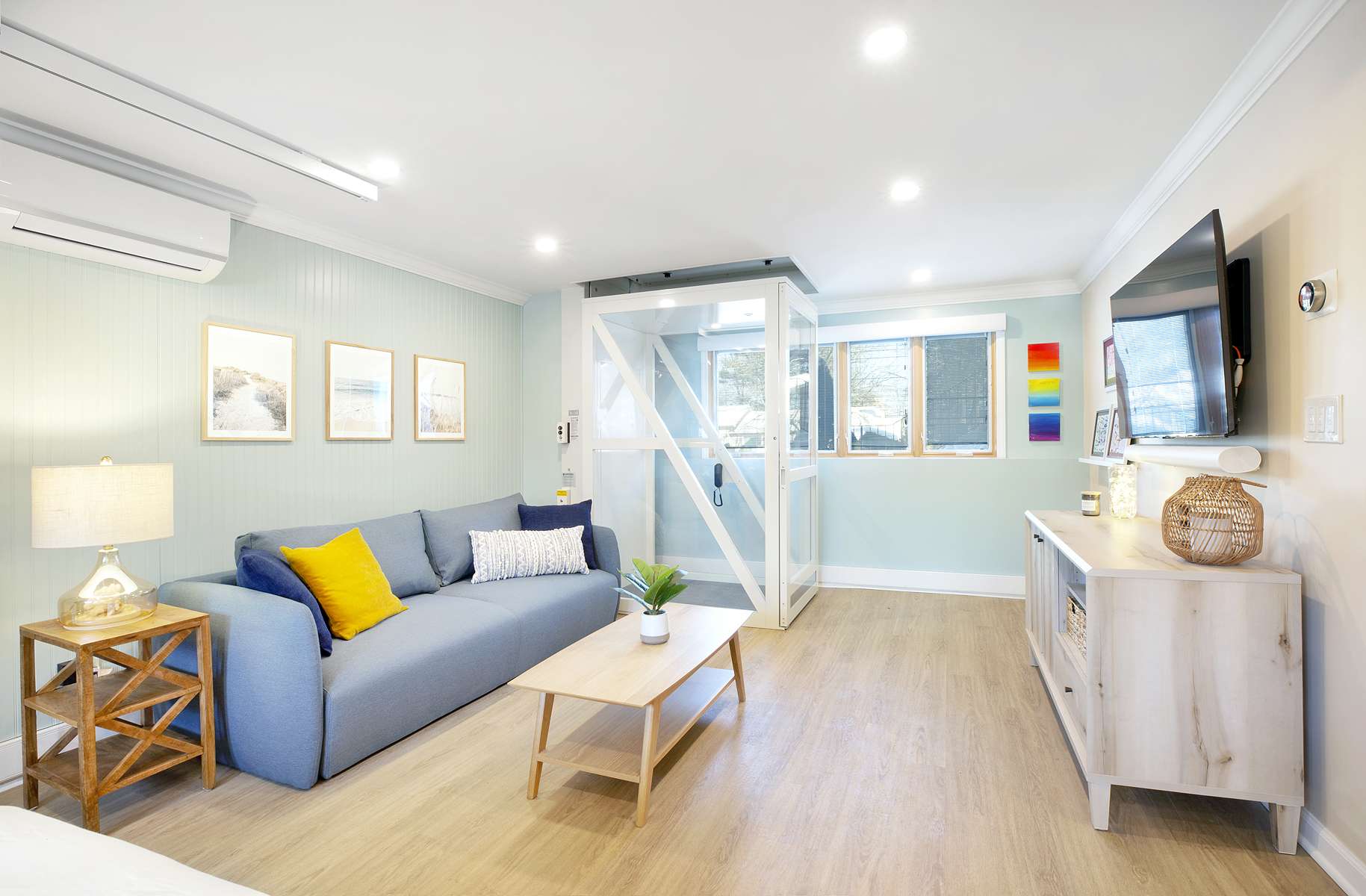 The first floor of the Koltun residence was reconfigured. The former family room, adjacent to the garage, was converted into Rebecca’s bedroom. The bathroom, located next to the new bedroom, was extended by four feet and now features all ADA-compliant fixtures, such as a barrier-free shower. The team installed a new hydraulic elevator that connects the bedroom to the former family den on the second floor, and equipped the home with multiple voice-operated systems, including lighting, audiovisual and television, doors, heating and air conditioning, the garage door, window blinds, and an exhaust fan in the bathroom.
Photo by Ola Wilk/Wilk Marketing Communications

“As an employee-owned firm, JRM’s guiding principle has been to build a company we are proud to call our own. Our firm has always been committed to not only excellence in construction, but excellence in citizenship as well. After previously working on a pro-bono project with George Oliphant and his team at ‘George to the Rescue’, we were excited to once again have the opportunity to come together for this worthy cause. We hope our work has helped Rebecca and her family live more comfortably in their home,” said Joseph P. Romano, President, JRM.”

“Words cannot describe how grateful we are for all the effort and hard work that went into providing our family with such a beautiful and functional place to live. Thank you!” said Rebecca’s father Scott Koltun. “I am humbled by all of the time, energy, and creativity the “George to the Rescue” team has given to allow us to go home and live together. The caring, kindness, and generosity has been unimaginable,” added Audrey Koltun, Rebecca’s mother.

The Koltuns’ two-story home, in the Long Island community of Plainview, sits on a sloped site. Typical for the local architecture, it originally featured multi-level interiors, where even a transition from the garage to the living area required a nine-inch step. Both the hallways and doors were too narrow for a wheelchair and the only means of accessing the second floor was a stair.

The designers and builders analyzed numerous options for transforming the house to accommodate Rebecca’s mobility and daily routine needs, car access, and providing comfortable interiors for the parents. “To allow easy access from a van to the interiors, the team built a new driveway on the eastern side of the home, removed a back porch and a small section of an existing garage, and built a new ramp extending from the garage to the first floor of the residence,” explained JRM Construction Lead Benjamin Blanck.

The first floor was reconfigured. The former family room, adjacent to the garage, was converted into Rebecca’s bedroom. The bathroom, located next to the new bedroom, was extended by four feet and now features all ADA-compliant fixtures, such as a barrier-free shower. The team also reconfigured the stair to the second floor. To provide privacy, the stair was turned around 180 degrees to move the landing away from the new bedroom.

Most importantly, JRM worked with Alpha Care Supply to install a new hydraulic elevator, manufactured by Savaria Group, that connects the bedroom to the former family den on the second floor, now converted into Rebecca’s office and art room. The office features custom designed and fabricated furniture, storage, and work surfaces that allow for comfortable study and work from a wheelchair. The desk’s height is automatically adjustable.

The designers and builders equipped the home with multiple state-of-the-art Alexa voice-operated systems, including lighting, audiovisual and television systems, doors, heating and air conditioning, the garage door, window blinds, and an exhaust fan in the bathroom.

The project team was highly invested in improving the entire home for the family. In addition to renovating Rebecca’s living area, the contractors volunteered to also refinish the floors, walls, and ceilings in the parent’s bedroom and in other spaces on the second floor.

“An important part of the project was redesigning the backyard to provide access for Rebecca,” continued Blanck. “It was originally sloped, which would make it difficult to enjoy with a wheelchair. Our team built a new retaining wall, which then allowed us to grade and level the backyard and create a new paved patio and landscaping. The backyard also features a new irrigation system and lighting.” 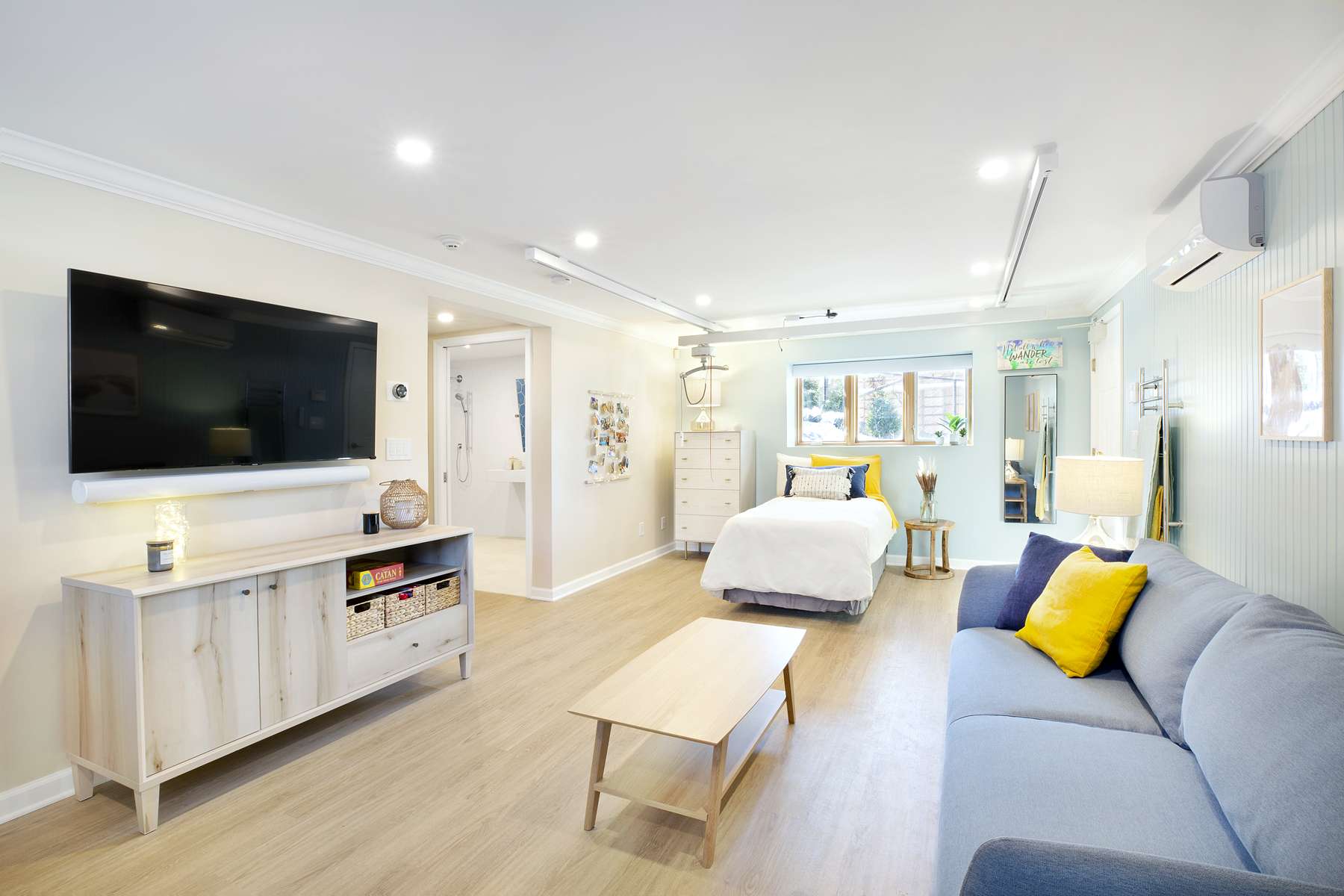 The designers and builders faced numerous technical and logistical challenges. For example, the access to the building and the yard was difficult. The builders had to remove a large section of the fence to provide access to heavy equipment. The interior renovation was technically challenging as well. Because typical timber-framed homes are not structurally designed to support an elevator, JRM’s on-staff structural engineer designed an additional structural support system, which was erected prior to the installation of the elevator. Other challenges included the pandemic-related material shortages and delays.

The Koltun family moved into the renovated home in early 2022. The “George to the Rescue” episode showcasing this project will air in late March of 2022.

Headed by principals, the specialized studios have served as designer for some of the most innovative – and challenging – projects in New York City. MDA and MADGI are known for their design quality, expertise in cost control, technological acumen, and addressing complex zoning regulations. The studio has designed approximately 10 million square feet of office and common-use space for both tenants and leading commercial landlords in the U.S., including Colliers International, Capital Properties, The Durst Organization, John Hancock, and Barings.