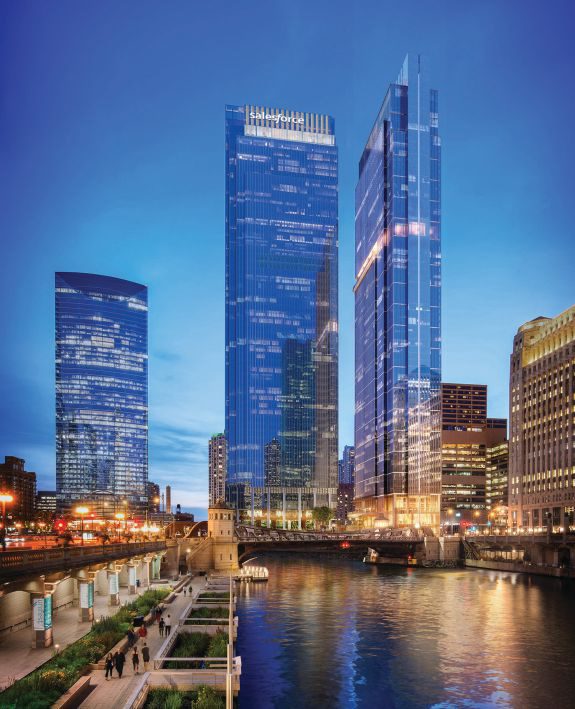 The Chicago River has been transformed into a vast recreational park, with opportunities for residents and visitors to access and enjoy the river at almost every mile. The most-notable stretch is the Chicago Riverwalk, which extends about 1.25 miles from Lake Michigan to Wolf Point. Here, an extraordinary mixed-use development is being completed that features Salesforce Tower Chicago and two luxury residential towers, all connected by a lush public park and the Riverwalk. This unique building site is at the confluence of the Chicago River’s three branches, home to the city’s first commercial settlement in the early 19th century.

Salesforce Tower Chicago, the 60-story modern landmark that anchors Wolf Point, sits adjacent to the historic Merchandise Mart, once the largest building in the world. The tower is the third phase of the Wolf Point master plan designed by Pelli Clarke & Partners (www.pcparch.com) and located on one of the last remaining riverfront sites in downtown Chicago. The tower will be home to Salesforce’s regional headquarters and offer premium office space with unparalleled river views and state-of-the-art wellness amenities in a vibrant public park setting.

“We approached the collection of the three buildings in a master plan to create this vibrant outdoor space, tying in with the Riverwalk and creating an entirely new neighborhood in what had been sort of a leftover industrial space for about 80 years,” says Darin Cook, a partner and design team leader with Pelli Clarke & Partners.

An iconic addition to Chicago’s renowned skyline, Salesforce Tower Chicago has a classic stepped form that gracefully merges with the sky. With a north-south orientation, its rectangular massing and curtain walls form an elegant silhouette that evokes connection with Wolf Point East, which has an east-west orientation articulated by several upper-level setbacks. Salesforce Tower’s series of gently tapering setbacks give the structure a striking sculptural profile, and its curtain walls combine glass and metal to balance a feeling of solidity and transparency. The development’s campus setting provides a welcoming gateway to the surrounding park and newly expanded Riverwalk. Underground, a four-level parking garage is hidden from view. 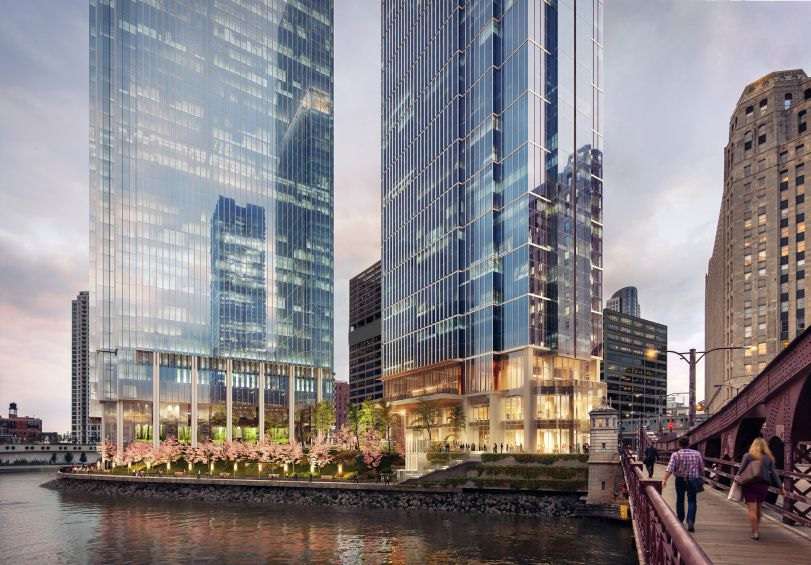 The tower sits adjacent to the historic Merchandise Mart and steps away from cultural destinations and the Chicago Riverwalk. (Steelblue)

In the building’s planning stages, structural options such as concrete, steel and masonry were considered. Ultimately, project leaders determined that a steel-framed building using high-strength ASTM A913 grade 65 structural steel, supplied by Nucor (www.nucor.com), would be the most cost-effective solution. Nucor’s new Aeos high-strength steel, made in Blytheville, Ark., is North America’s only domestically produced A913 steel. Available in minimum yield strengths of 50 and 65 ksi, Aeos 65 was specified for the Salesforce Tower Chicago project because it’s strong enough to meet the engineering requirements for a tower of this magnitude, yet flexible and structurally versatile enough to achieve the project’s innovative architectural vision.

“As we looked at structural options for the Salesforce tower, it became clear that structural steel was the best solution for this particular project,” says Dave Eckmann, a senior principal of Magnusson Klemencic Associates (www.mka.com), the project’s structural engineering firm. “Certainly, taking advantage of the high-strength steel in the project reduced the column sizes, which reduced the enclosures and made it more desirable to the architect and actually created more leasable space for the developer.”

“Having experience with the use of grade 65 material on various projects, we felt very comfortable using it as much as it is on the Salesforce Tower project,” he says. “We can reduce the weight of members somewhere in the neighborhood of 30 percent by going from grade 50 to grade 65. It actually requires less preheat than grade A992, and it can eliminate one to three hours of preheat time per joint when splicing grade 65 material together.”

Because of the weight savings, switching from A992 to Aeos 65 translated to significant material cost savings and reduced foundation requirements. In addition, with some of the columns on the building weighing in excess of 50,000 pounds, a heavier, lesser grade of steel would have caused issues with the crane and its capacity. The weight savings reduce the overall truss dead load, which allows for the design of smaller sections throughout the truss. According to Nucor, switching from A992 to Aeos 65 generally decreases column sizes two footweights within the same section family.

How High-Strength Steel Is Made

Although the ASTM A913 specification has been around for more than 20 years, there has been a renewed interest in using A913 structural steel shapes thanks to an advanced thermo-mechanical process called “quenching and self-tempering (QST).” QST equipment installed at the end of Nucor’s rolling line consists of several bays of water nozzles used to perform an in-line heat-treatment and cooling-rate control process on the company’s structural steel shapes. The method includes a regulated cooling (quench) of a section, followed by a reheat using energy retained within the core of the section (self-tempering). The procedure refines the steel’s microstructure, giving each section high yield and tensile strengths while also maintaining easy weldability and good toughness—three important but formerly incompatible properties. 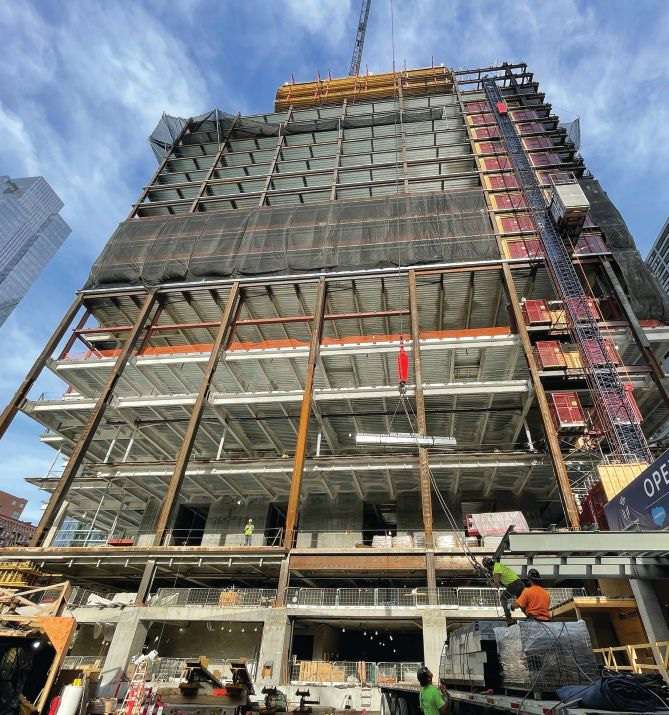 In addition to the benefits of less weight and ease of use, grade 65 steel also is an environmentally responsible building material. It’s 100 percent recyclable, so all the material used on a project and its waste can be recycled. In 2020, Nucor turned 20 million tons of scrap into new steel products. And because grade 65 steel is stronger and lighter, less material can be used, buildings can be lighter, cranes can be smaller, and less energy is consumed in a building’s construction.

“Architects, engineers, contractors, developers; we’re all looking to build bigger and build bolder, and high-strength steel gives us an ability to do that,” says Kevin Kuntz, senior design engineer at Magnusson Klemencic Associates. “It’s exciting to see where high-strength steel can take us, because it has a lot of benefits for strength-controlled elements like columns and transfer members.”

With an average floor-plate size of 24,500 rentable square feet, Salesforce Tower Chicago will offer efficient planning for a variety of office users. Amenities will include a club-quality fitness center with locker rooms and showers, a conference center with multiple configurations and capacity sizes, a tenant lounge, and approximately 25,000 square feet of commercial retail space, including a variety of food and beverage options. Construction on Salesforce Tower Chicago is expected to be completed in late 2023.

“When Salesforce Tower is completed, it’s going to be this amazing new terminus at the confluence of the Chicago River,” says Cook.