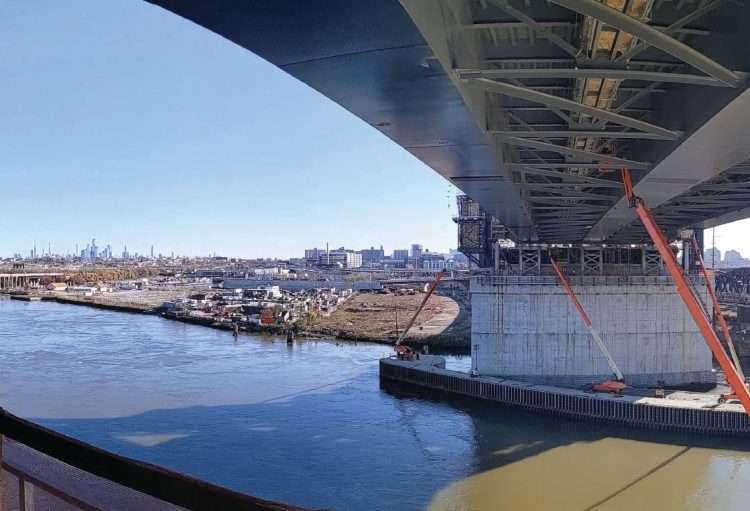 An estimated 178 million trips are taken across the nation’s more than 617,000 bridges, but approximately 7.5 percent of the nation’s bridges are considered structurally deficient, and 42 percent of all bridges are at least 50 years old. Considering recent incidents of bridge collapses in the news as well as the ‘C’ grade the American Society of Civil Engineers (ASCE) gives the nation’s bridge infrastructure, the criticality of bridge inspection can’t be understated.

A prime example of an aging bridge is the original Wittpenn Bridge—named for former Jersey City, N.J., Mayor H. Otto Wittpenn. It serves as a key corridor into New York City, extending New Jersey Route 7 over the Hackensack River and connecting Jersey City and Kearny, N.J. Although it currently serves 50,000 vehicles per day, it’s almost a century old and is insufficient for 21st century use.

Construction of the new Wittpenn Bridge began in 2016 next to the old one to accommodate increased traffic as the city grew. The new version is a vertical-lift bridge and represents the state’s first orthotropic bridge deck, a lightweight structural steel deck plate featuring longitudinal ribs and transverse floor beams under a wearing-surface-covered steel plate. Construction also included a control system and road approaches.

For the Wittpenn Bridge project, AEIS performed visual and NDT inspections as well as welding inspections on the two orthotropic deck splices that run the length of the lift span. The company partnered with general contractor CCA Civil and its structural steel partner Northeast Structural Steel to complete the bridge inspection and testing. AEIS executed its tasks from fall 2020 to fall 2021 for the lift span section.

An orthotropic bridge deck provides a lighter design with a 50-year lifespan. In the case of the Wittpenn Bridge, the orthotropic deck was part of one assembly that made up the lift span, which is 324 feet long with ramps and other roadway bridges that lead to it.

“We were there to ensure the welds and field joints were done to the designer’s expectations per the codes referenced in his specifications, and that the welds were able to withstand that,” says Greg Sowa, the technical/project manager for AEIS.

Highway-structure welding specifications are found in the AASHTO/AWS D1.5/D1.5M bridge welding code. With respect to the codes, the Wittpenn Bridge welds are considered fracture-critical members.

“The three orthotropic deck panels that made up the two longitudinal joints that ran the length of the bridge were considered fracture critical,” explains Sowa. “When you drive under a bridge, you can see the big girders and everything that makes up the structure. These welds were connecting those pieces together and were held to a much higher standard than most other orthotropic deck panels because they were actually making up the main members of the bridge.” 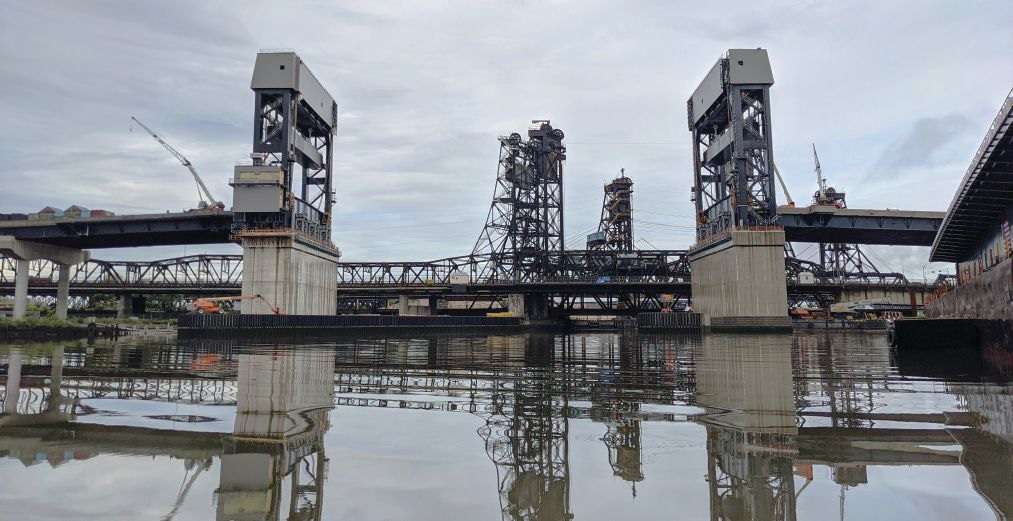 The Wittpenn Bridge, nearly a century old, is readied for 21st century use.

“With a structure like this, testing begins even before any building or fabrication starts in the field,” says Nagesh Goel, AEIS president and co-founder. “The contractor will propose how they’re going to weld this together. They make some samples of those using the approved welding processes.”

According to Goel, the contractor determines the wire used, how much current voltage is needed and the different welding variables, and then produces some sample coupons using those different parameters.

“Those are then sent to our laboratory, where we perform various destructive tests to ensure certain properties are well within the required properties, such as ductility strength of the material yield strength, tensile strength and toughness,” he adds. “If these things are established, the welding processes and procedures have been qualified for the work to begin at the job site.”

Sowa says before AEIS starts its work, the company team meets with the production crew to establish hold points so tests and inspections can take place before moving to the next step in the process.

“We are there through the entire process,” adds Goel. “Before we start, we will be checking for joint alignment and other dimensional aspects. When the inspection takes place, we are there. There is a visual inspection after the welding is completed, and there is a dwell time after we can start the NDT. After some amount of time, we would perform certain non-destructive testing to ensure soundness.”

“Nobody’s perfect,” adds Sowa. “That’s why we’re there. While we were doing our non-destructive test, indications were observed and called. We would be involved with helping the contractor note those areas and come up with a plan or procedures on how we were going to fix those. All that would be put together into a submittal package to the engineer who would come back with comments if there was anything additional to follow. We would be there to ensure those steps were followed and the repair was accepted.”

In terms of crews needed to complete the work, AEIS established that each of the two welding crews would be assigned one Certified Welding Inspector (CWI) for the visual.

“When they started work on the top side of the bridge, those crews moved up there,” says Sowa. “We had two NDT technicians who would take care of the magnetic particle and the ultrasonic testing throughout the project.”

The CWIs needed to maintain their certified welding inspector license through the American Welding Society, and the NDT technicians were certified through the American Society for Nondestructive Testing. All of AEIS’ technicians are certified under the company Level 3 and ASNT TC-1A, a practical and specific test they would have to pass to be certified to that standard, explains Sowa, who also notes that this project is different from other bridge inspections done in the past because it was held to a higher standard as the welds were fracture critical.

“We conducted training inhouse, because not every job we go on has everything fracture critical,” he says. “These inspectors had to be made aware that this is a different criteria and a different standard, but it was nothing we couldn’t handle.” 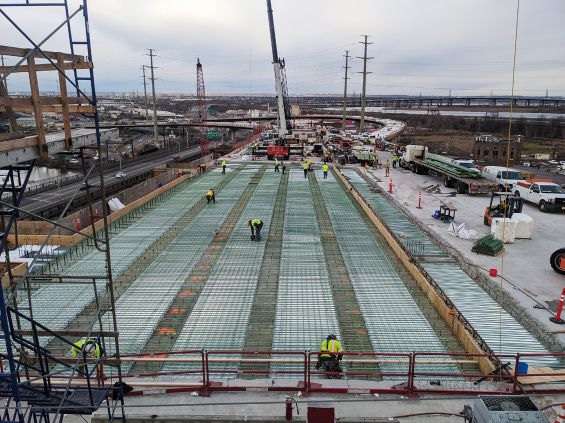 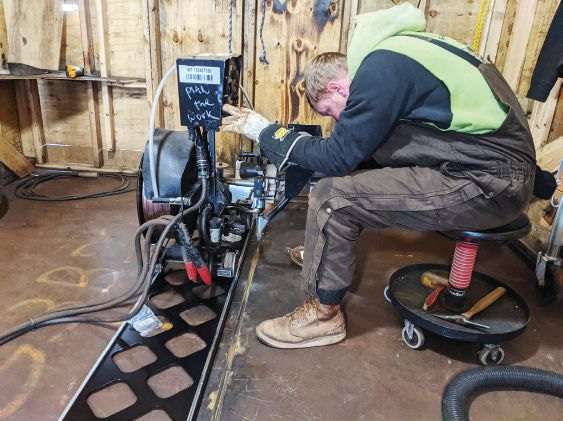 A worker executes one of a multitude of bridge-testing requirements. 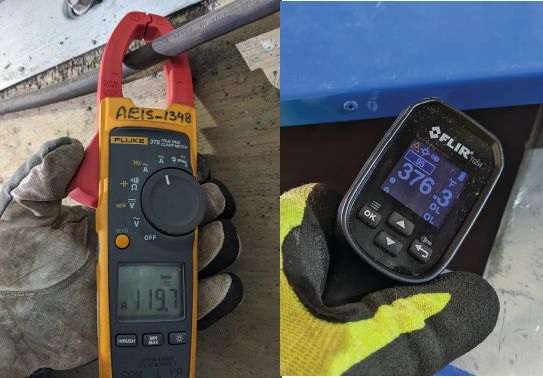 Tools of the Trade

Each inspector has gauges for measuring weld joint root openings, bevel angles, clamp meters for measuring current, thermal thermometers and temp sticks to make sure the preheat of the materials was being maintained.

“All of that equipment had to be calibrated in our lab here to make sure it was accurate,” adds Sowa.

Another challenge on the Wittpenn Bridge project is that a lot of the work was done in winter. “When you’re doing field welding or any type of welding, the steel has to be maintained at a certain temperature,” explains Sowa. “In this case, the temperature that had to be maintained was a minimum of 150 degrees while they were performing the work. The biggest challenge was being outside and 100 to 200 feet above the water and keeping the steel at that temperature. The contractor used an induction heating system that maintained the preheat of the area that was being welded.”

Another challenge was keeping the area clean and out of elements such as rain or wind. “They built these big shelters that would move down the bridge as the weld front was continuing down the length of the bridge,” says Sowa. 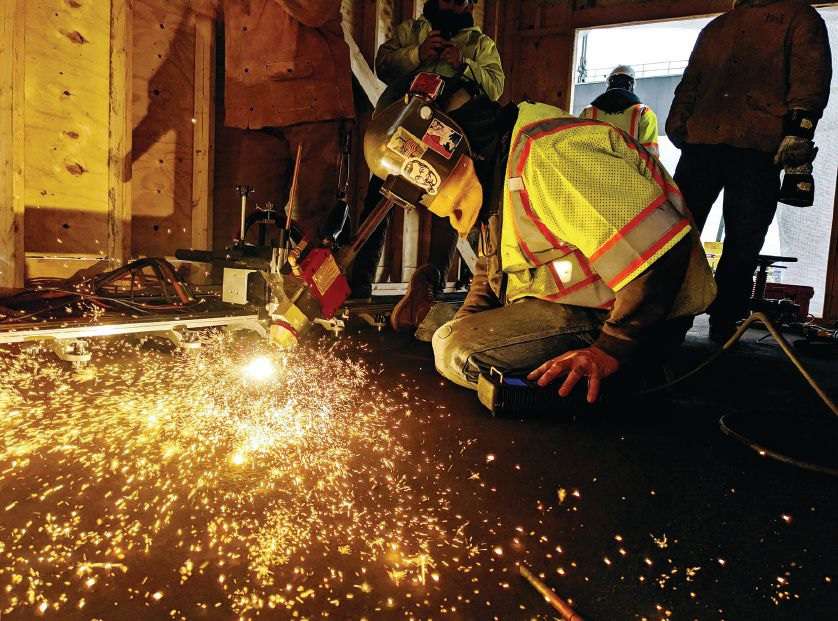 The benefits of the new Wittpenn Bridge include additional traffic lanes, wider lanes, new east and west approaches, improved connections to Routes 1 and 9 in Jersey City, increased vertical clearance over the Hackensack River, and greater motorist safety and efficiency. The bridge also will serve pedestrian and bicycle traffic.

The new Wittpenn Bridge—constructed approximately 200 feet north of the original bridge—now is open and complete.

“The primary purpose for which inspection agencies are hired is to help make sure the construction teams are doing the work as per the code, specifications, standards, and approved documents and drawings,” notes Goel. “Our approach is not the ‘gotcha’ approach. We are not there to police the job. We work with the construction team.”

The AEIS team notes potential issues and discusses options to be mitigated before they become actual issues of concern. “That’s critical on how the appropriate inspections are ensuring the code requirements are met,” says Goel.

Sowa says he derives a great sense of satisfaction from doing bridge inspection. “It’s pretty cool to show up on the first day and you just see a pile of dirt and some trees, and then a few years later, you’re driving over a bridge that you helped make safe,” he adds.