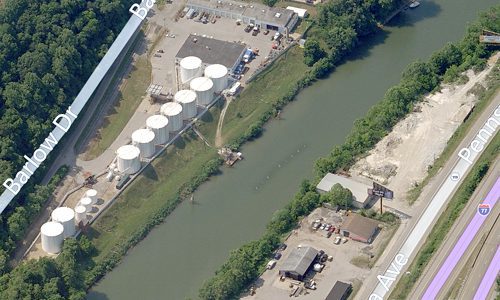 A chemical spill in Charleston, West Virginia contaminated the Elk River and the state’s largest water treatment plant that supplies a nine-county area. The chemical that was spilled is 4-methylcycloheane methanol (MCHM), used in cleaning coal dust. The toxicity of this chemical to humans has led to warnings not to bathe, cook or wash clothes using tapwater, leading to a declaration of a state of emergency. More than 300,000 people are without water in their homes, six people have been hospitalized, and many schools, hospitals and businesses are without water. The chemical leak at Freedom Industries of the chemical MHCM into the Elk River has impacted the tapwater of more than 300,000 residents.

Around Noon on Thursday, officials from the state Department of Environmental Protection’s air-quality division discovered the leaking of MCHM from a 48,000-gallon storage tank directly into the Elk River. The facility owned by Freedom Industries a subsidiary of Etowah River Terminal, LLC, and the company did not report the leak themselves. Investigations are ongoing to determine the cause of the leak, and how long it was taking place.

Bottled water quickly sold out in the area, and the National Guard was called in to restore order after reports of looting. The troops escorted and stood guard over clean water distribution at the Charleston Civic Center. The Federal Emergency Management Agency sent 75 tractor trailers full of bottled water to distribute, with National Guard assistance.

“Clean water is essential for life. We cannot cut corners in ensuring that our drinking water supply is protected,” said Angie Rosser, executive director of the West Virginia Rivers Coalition. “There is too much at stake—our health, our economic stability, our confidence in water security. We hope that once the immediate crisis phase is over, serious thought will go into meaningful reforms and investment in protecting our rivers and streams that are our lifeline.”

Inspectors have assured the public that only 5,000 gallons from a 40,000 gallon holding tank had escaped, with some held in a secondary containment area next to the river. The industrial chemical is water soluble, so authorities are working to flush it from the system in hopes to allow homeowners to open their taps. Officials will work in a regional fashion to open taps as they meet the 1 part per million requirement set by the federal Centers for Disease Control and Prevention.