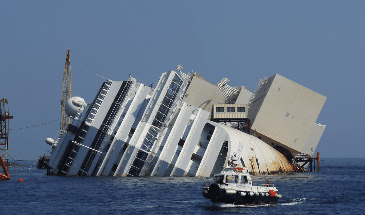 Matt Ball on January 13, 2014 - in Uncategorized
The cruise ship Costa Concordia with more than 4,200 passengers and crew on board hit a rocky outcrop and ran aground off the coast of Isola del Giglio in Italy in January 2012, leading to the loss of 32 lives. Nearly two years later, in September 2013, the salvage project started with parbuckling the wreck. It is estimated that the recovery operations will cost around 500 million euro in total and be finalised in summer 2014. During the entire salvage operation environmental protection has top priority. Once removal is complete, the sea floor will be cleaned and marine flora replanted. Copernicus satellites assist the Italian coast guard during the whole recovery operation with satellite-based information. Not only radar satellite images were taken during the salvage process to monitor the stricken cruise ship day and night. Before the fuel was removed from the wreck satellite-based current forecasts for the Mediterranean Sea in combination with oil spill models were needed to simulate possible scenarios for the transport and dispersion of oil that could potentially leak from the ship during the operations. This information was especially important for planning appropriate
risk mitigation measures and enabling immediate reaction in the case of an oil spill. Other space based assistance to recovery operations will continue until the Costa Concordia wreck is fully salvaged.
The Copernicus Marine Monitoring Service uses satellite data to provide regular and systematic reference information and forecasts relating to ocean physics to assist coast guards to better plan risk mitigation measures. ESA’s Sentinel-2 mission will support the generation of frequently-updated background reference maps. Sentinel-3 will provide measurements of the state of the ocean surface, including surface temperature, ocean ecosystems, water quality and pollution monitoring.
Source: ESA