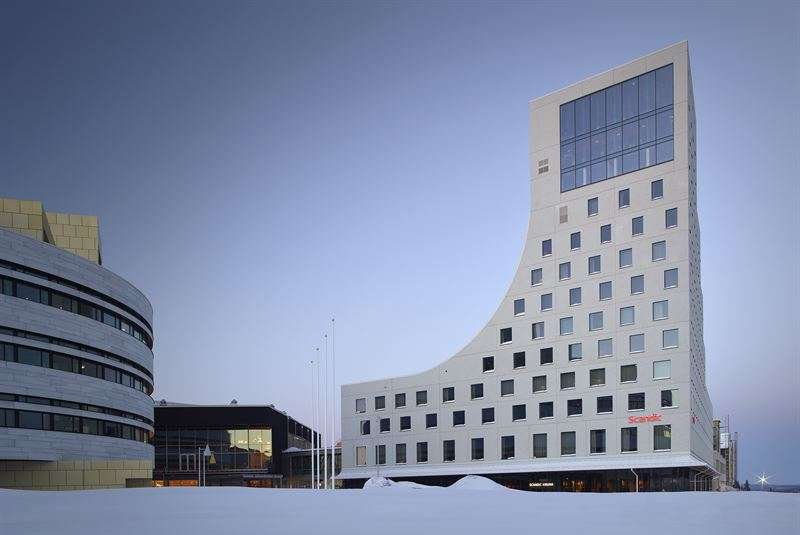 April 5 is a historic day in Kiruna. Today, Scandic Kiruna is the first commercial enterprise to open its doors in the new city center, a milestone in the internationally renowned urban transformation that has been ongoing since 2004. The new hotel has 231 rooms on 13 floors and architecture featuring a valley and peak design that echoes the Kebnekaise massif and Lapporten Valley. With the opening of Scandic Kiruna, Scandic will increase its room capacity by 60 rooms and become the largest hotel operator in the city.

Scandic Kiruna is strategically located in the middle of the new city center next to one of the city’s major conference centers, Aurora Kultur & Kongress, which is connected to the hotel by a skywalk. The new city has been located three kilometers from the old one in an urban transformation that has been ongoing since 2004. In conjunction with the opening of Scandic Kiruna, Scandic Ferrum, which the company has been operating since 1995, will close. The strategic location of Scandic Kiruna and new city center has also shortened the distance to Kiruna Airport and major attractions such as the popular tourist destination Jukkasjärvi.

Scandic Kiruna will be a new landmark for the city as evidenced by the hotel’s entrance level, which is styled as a modern base camp and destined to become a meeting place for people from all corners of the globe.

The interior is inspired by the changing seasons and features elements that reflect the natural beauty of the surrounding area and aspiration for an outdoor lifestyle. On the top floor, guests can take in the spectacular view of the mountains and cityscape from Sweden’s northernmost sky bar.

Also part of the new hotel is the iconic Mommas restaurant where visitors will be able to listen in as guests at the next table recount their adventures or describe a day spent in the Kiruna mine while former Ice Hotel Head Chef Alexander Meier prepares Northern-inspired meals in the open kitchen.

– April 5 is the historic day we’re closing the doors of our old hotel and opening the doors of Scandic Kiruna in the new city center. I speak for myself and my team members when I say that it feels great to welcome guests, visitors and residents of Kiruna to the new hotel. Scandic Kiruna is an important piece of the puzzle in starting up the new city center. Now, together with the local business community, we have the important task of increasing the influx of domestic, international and leisure travelers to Kiruna, says Peter Salomonsson, General Manager at Scandic Kiruna.

– Kebnekaise in all her winter beauty – that was my inspiration, explains Thomas Sandell, Architect SAR SIR/MSA, Sandellsandberg.

– One side of the building is soft and smooth as if polished by a retreating glacier as it rises upwards, while the opposite side is more rugged. At the bottom, there’s a comfortable base camp and at the top, a sky bar, so that just like when you ascend a summit, you can reward yourself with a glass of champagne, he says.

With Scandic Kiruna, Scandic is adding more room capacity with 60 new rooms, an important addition given that the region is an such an attractive location for so many industrial companies. The lifespan of the Kiruna mine was recently extended to 2046 and the urban transformation and expansion of the new city center is expected to continue until 2035. Scandic Kiruna is also widening its meetings and events offering with seven conference rooms and a banquet hall that can accommodate up to 350 people.

– Scandic has been an integral part of Kiruna since 1995. And with our high stake in the city, it’s extremely gratifying to open a new hotel where we’re expanding room capacity by 60 rooms and enabling large gatherings in Kiruna with our new meeting facilities that connect the hotel to the conference center. As a destination, with its scenic mountain landscape and large-scale industries, Kiruna offers an exciting dynamic of domestic and international business travelers as well as leisure travelers, and our new hotel is designed to suit all of these target groups, says Peter Jangbratt, Head of Sweden at Scandic Hotels.

Sustainability has been a central consideration, from the drawing board to the finished hotel. The property, which has been built according to the LEED Silver environmental certification, has been carefully designed to optimize energy. It is also well insulated and will have low water consumption. The hotel aims to impact the environment and mountainous surroundings as little as possible, which is ensured now that Scandic Kiruna has met the tough new requirements to be certified by the Nordic Swan Ecolabel, the official ecolabel of the Nordic countries.

In addition to environmental certification of the building and hotel operations, the hotel rooms have been designed with a circular mindset, and elements of the furnishings are environmentally certified or made of recycled materials. The interiors have a lifespan of up to 15 years and most materials can be reused or recycled during renovations, which is in line with Scandic’s vision of a completely circular hotel room.

About Scandic Hotels Group
Scandic is the largest hotel company in the Nordic countries with more than 280 hotels, in operation and under development, in more than 130 destinations. The company is the leader when it comes to integrating sustainability in all operations and its award-winning Design for All concept ensures that Scandic hotels are accessible to everyone. Well loved by guests and employees, the Scandic Friends loyalty program is the largest in the Nordic hotel industry and the company is one of the most attractive employers in the region. Scandic is listed on Nasdaq Stockholm. www.scandichotelsgroup.com