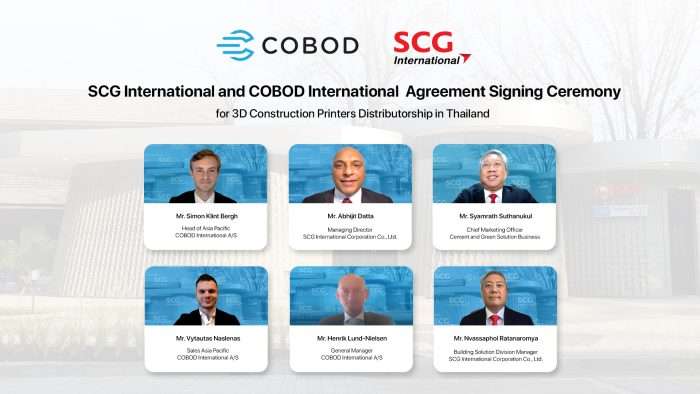 COBOD International, world leader in 3D construction printing solutions and known for having provided the 3D construction printers to most of the 3D printed buildings announced in 2021 and 2022 including buildings by PERI, Printed Farms and 14 Trees, today signed a distributor agreement with Siam Cement Group (SCG). The Siam Cement Public Company Limited is the largest and oldest cement and building material company in Thailand and Southeast Asia. SCG is also ranked among the largest companies in Thailand and among the 1.000 largest public companies in the world by Forbes with a 12bn$ revenue in 2020 and almost 54,000 employees.

SCG is now ready to take the lead in the region by transforming the construction sector facilitated by COBOD’s 3D construction printers. The first step follows that SCG for years have been making prototypes and buildings using other printers but has now decided for the leading 3D construction printer with most in-market experience and bought a COBOD printer.

Abhijit Datta, Managing Director, SCG International said: “3D construction printers have been widely used in many parts of the world with excellent results. The technology helps reduce waste and increase construction times with foolproof simulation with minimal numbers of laborers. This is the starting point of this collaboration with COBOD International A/S. Together, we will improve Thailand’s construction market with the future expectation of extending cooperation in the ASEAN. With our regional expertise and domestic solid business alliance relationship, we are ready to assist our partner in achieving long-term success.”

SCG will be gaining additional know-how in the coming months and then eventually develop a dedicated sales channel in the 3DCP segment.

Henrik Lund-Nielsen, Founder & General Manager of COBOD said: “We are very proud that Siam Cement has chosen to become a partner with us. The fact that Siam Cement has now invested in a 3D printer from us and even want to exclusively distribute our printers is a sign of great conviction in the future potential of 3DCP technology – a positive trend we have seen among cement and concrete manufacturers across all continents over the last 6-9 months.”

Simon Klint Bergh, Head of Asia Pacific at COBOD continued: “Considering only the past 6 months we have seen orders in this segment from Europe, Latin America – and now Asia. Engagement is coming from both global giants but also regional or local players. Overall, among the manufacturers of concrete and cement there is an acceptance and true belief that 3DCP is going to play a vital role for the industry in the years to come. We are thrilled now to be able to count Siam Cement as one of our partners. “It is well-known that COBOD already has co-operations with other cement makers, including Holcim which is doing the materials for the GE Renewable Energy project with COBOD regarding extra tall 3D printed wind turbine towers, and with Holcim’s daughter company 14 Trees involving printing of schools and houses in Africa. With CEMEX COBOD recently announced the co-development of the world’s first Generation2 real concrete material for 3D construction printing, which is a game-changer in terms of cost making 3D construction printing very price competitive compared to conventional building technologies and methods.

Our mission is to disrupt the global construction industry through world class 3D automation. Faster. Better. Cheaper. We 3D printed Europe’s first building in 2017. Subsequently the first 2- and 3-story buildings in Belgium and Germany were made with our technology. Also, the first villa in Dubai and the first buildings in Africa have been done by our 3D construction printers, like the first wind turbine bases. We have an open-source strategy, partnering with customers, academic institutions, and suppliers around the world. Our partners include GE (US), PERI (Germany), Cemex (Mexico), Holcim (Switzerland), Dar Al Arkan (Saudi Arabia), L&T Construction (India), and JGC (Japan). Our vision is to see 3D printed and robotics constructed buildings in every city around the world. HQ in Denmark, +80 highly competent pioneers from 20 nationalities and truly global presence in Asia, Middle East, Africa, Europe, US, Latin, and South America.

SCG, a leading business conglomerate in the ASEAN region, has committed itself to conducting business in line with good corporate governance and sustainable development principles throughout 100 years. The Group’s longstanding tradition of learning, adjustment and development in all areas has enabled SCG to survive the wave of crises and challenges and earn widespread recognition as a role model for other businesses, both locally and internationally. SCG was established in 1913 following a royal decree of His Majesty King Rama VI to produce cement, the main building material for infrastructure projects that greatly contributed to the progress of the country during that period. Since its founding, SCG has grown continually and diversified into three core businesses, namely Cement-Building Materials Business, Chemicals Business and Packaging Business.