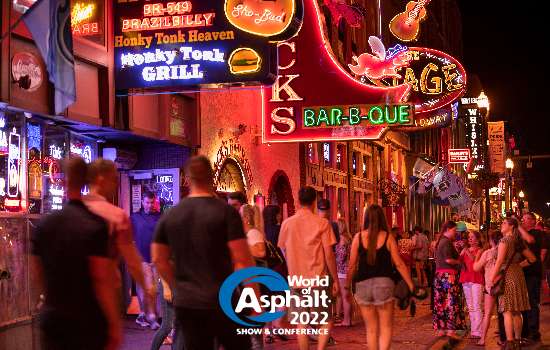 MILWAUKEE – World of Asphalt and the co-located AGG1 Aggregates Academy & Expo are coming to the Music City Center in Nashville, and asphalt paving pros should be making their travel and experience plans now to make the most out of their visit to the Music City.

Here are some suggestions to consider:

WHAT TO KNOW ABOUT THE SHOW

DISTILL YOUR EXPERIENCE, OR BREW UP YOUR OWN PLANS

While the famous Jack Daniels distillery is an hour and a half drive south to (famously) dry Lawrenceburg, Tenn., you don’t need to leave town for local libations. Nelson’s GreenBrier Distillery in Nashville promises “whiskey worth singing about,” while Pennington Distilling Co. offers award-winning whiskeys, vodkas, and a “Tennessee Sipping Cream” on their tours. Asphalt paving pros can also get a two-fer at 6th and Peabody, featuring both the Ole Smoky Moonshine distillery and Yee Haw Beer brewery. Or, if you just want to try them all at one place, Gertie’s Whiskey Bar is one of the best in the nation according to the Nashville Convention & Visitors Corp.

If you’re a craft beer aficionado, Bearded Iris Brewery has a little something for everyone, while the recently expanded Fat Bottom Brewing Co. features plenty of space for its big beers. If cider is more your speed, Diskin Cider is Nashville’s first (and only) cidery, offers traditional English (read: not too sweet) ciders and simple food.

Every four years, the winter games take over television for two weeks, and many viewers come away with one nagging thought: “I want to try curling.” Well, Nashville’s TeeLine just opened, offering both curling and bowling to those inclined to throw heavy objects in slightly curved lines.

If your tastes trend more toward the supernatural, several ghost tours are on offer to asphalt paving pros at World of Asphalt, including a downtown tour, a haunted tavern tour and even a hearse tour.

If you like to explore the history of the places you go, you could do worse than former President Andrew Jackson’s Hermitage, just ten miles east of downtown. If you’re not able to make it that far out of town, Marathon Village is a great collection of unique retail, business, and entertainment establishments located in the former Marathon car factory in Nashville. Their most notable tenant? Antique Archaeology’s Nashville location, made famous by the History Channel’s American Pickers. Given their hours, the best time to visit may be after the show closes early on the afternoon of Thursday, March 31.

Music aficionados are spoiled for things to do in the Music City in general, but one experience that happens to coincide with World of Asphalt is the Tin Pan South Songwriters Festival that is running at the same time. The four-day, 8-venue, 64-show festival features songwriters from all over the nation, and many of those shows sell out, so if you’re looking for some picking and grinning after learning about paving, get your passes now. With the earliest shows opening after the show floor closes each night, you won’t have to stay extra to not miss a thing.

In addition to that, the Grand Ole Opry will have shows every night, featuring artists like Gary Mule Deer, Del McCoury, The Steeldrivers, Lauren Alaina and more.

And then there are the music museums and halls, including the Country Music Hall of Fame, Musicians Hall of Fame, Ryman Auditorium, and the Johnny Cash Museum.

If you haven’t registered for World of Asphalt yet, as it celebrates its 20th anniversary, there’s still time to get your badge at WorldOfAsphalt.com.

About World of Asphalt

Held every year except during CONEXPO-CON/AGG years, World of Asphalt is the leading trade show and conference focused on the asphalt and paving industries, whose most recent edition was recognized by Trade Show Executive as one of the “Fastest 50” growing trade shows. The show features the best education, and latest equipment, products, services and technologies for the asphalt and paving industries. The next World of Asphalt, co-located with the AGG1 Academy & Expo, will be held March 29-31, 2022 at the Music City Center in Nashville, Tenn. For more information on World of Asphalt, visit www.WorldOfAsphalt.com.

About the Association of Equipment Manufacturers (AEM)

AEM is the North America-based international trade group representing off-road equipment manufacturers and suppliers with more than 1,000 companies and more than 200 product lines in the agriculture and construction-related industry sectors worldwide. The equipment manufacturing industry in the United States supports 2.8 million jobs and contributes roughly $288 billion to the economy every year.

The National Asphalt Pavement Association (NAPA) is the only trade association that exclusively represents the interests of the asphalt producer/contractor on the national level with Congress, government agencies, and other national trade and business organizations. NAPA supports an active research program designed to improve the quality of asphalt pavements and paving techniques used in the construction of roads, streets, highways, parking lots, airports, and environmental and recreational facilities. The association provides technical, educational, and marketing materials and information to its members; supplies product information to users and specifiers of paving materials; and conducts training courses. The association, which counts more than 1,200 companies as members, was founded in 1955.