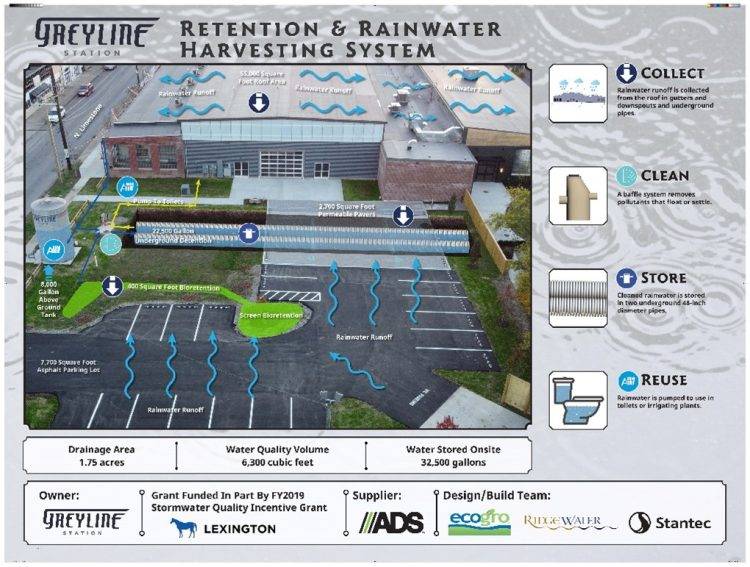 LEXINGTON, Ky – The 100-year-old former bus garage here is now providing the city with 21st century ecological benefits.  The Greyline Station has a retention system that gathers rainwater from its five-acre site and holds some of it for reuse.

Redeveloped and opened in 2020, the 65,000 square foot complex now has retail spaces, an event venue, restaurants, a public market and even a radio station.  The new owner of the former Lextran public bus system’s headquarters and maintenance garage used stormwater best management practices to have a closed cycle for on-site rainfall runoff including collection, treatment, detention and reuse.  Stantec, Inc., the global engineering firm, was given the assignment to improve water quality while reducing the impact of flooding from impervious surfaces typically found in a city setting.  Another important component of the project was to have a continuing program of public education about sustainable stormwater development.  With room for new construction at a premium, Lexington saw that the Greyline project could serve as a model for sustainable redevelopment of existing buildings.

“Our goal,” explained Samuel Lee, P.E.,  Stantec’s Lexington, Kentucky office lead engineer on the project, “was to remove and retrofit existing impervious surface areas with permeable alternatives such as turf grass and pavers.  The system would capture, retain, infiltrate, and recycle rainwater runoff, and have a detention system that would attenuate peak discharges and reduce runoff velocities.  The roof runoff flows in a combined leader, treated with baffle “snouts”, and goes into two parallel, 48-inch diameter pipes for underground detention that would supply greywater for mop sinks, toilets and irrigation.  The leaders would also tie into an above ground cistern, an aluminum tank which we recycled from an agricultural site.  For additional detention and irrigation plus parallel stormwater infiltration, the other BMPs would include a bioretention basin, permeable pavers parking area, and planting strip along North Limestone, adjacent to where Greyline is on West Loudon Avenue.”  In December 2021, the project was honored with the American Council of Engineering Companies (ACEC) Kentucky Chapter’s Engineering Excellence Grand Award, and is eligible for the ACEC’s 2022 National EEA competition.

Built in 1928, the building housed Southeastern Greyhound Lines and was Lexington’s largest private employer by the 1940s, and later taken over by Lextran.  After being empty for decades, it was listed on the National Register of Historic Places in 2014 to stave off demolition.

“This all started from a Neighborhood Association meeting,” explained the building’s owner, visionary and one-man force behind the area’s urban revitalization, Chad Needham of Needham Properties (Lexington, KY).  “Lextran wanted to keep the land, but they didn’t want the building.  The association, however, decided that we would fight to keep the building and was able to have it designated as a National Historic Landmark.”

Needham started renovating old buildings nearly 23 years ago, with his entire focus on the northside area of the city.  He now has 40 buildings that range from 3,000 to 5,000 square feet within four blocks of each other.  ”The Greyline is by far the biggest.  It is five acres and has about 100,000 square feet of building space on it.  There are four buildings on the site.  The old bus garage is the largest and handles all of the roof water collection.  It’s kind of a cool building that’s almost a hundred years old and just sat here empty for years.  So, I was sitting in this neighborhood meeting thinking:  What would be the coolest thing to do with this corner? 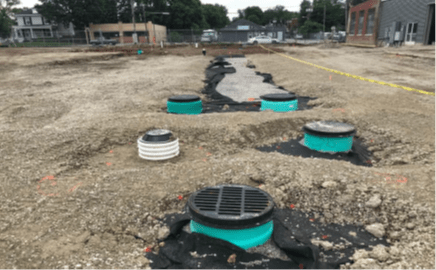 “I’ve been to several public markets.  Pike Place Market out in Seattle is fantastic.  We have a couple local ones. Columbus has the North Market,  and D.C. has the Eastern Market.  Could we take this site and do something like that?  And I thought a public market would be the coolest neighborhood hub.

“But what could be created in a 65,000 square foot building that would be financially viable?  And could we engage the neighborhood in doing that?  The answer was to create a mixed-use building with affordable retail,” he continued.  “Everyone talks about affordable housing, which is very important, but could we do essentially affordable retail and what does that look like?  That was the mission I set out on.  When you do redevelopment, especially in Lexington, there’s some offsetting you have to do.  There’s stormwater offset, which here has to do with a consent decree with the EPA.

“We had a few challenges and hurdles of what to do with this site.  It did flood.  And we came up with this great way to collect all the roof water and store it to be used as gray water to flush the toilets and for our landscape irrigation.  Plus, this really helps the tenants with their water bill which is can be about $400 depending on the square footage, compared to probably a  thousand dollars.  This type of catchment system and reuse benefits all the tenants.”

The system Lee designed separates floatable pollutants such as oils/grease and trash with baffle treatment units, while removing dissolved constituents filtered in a bioretention basin that has a mulch/sand layer and vegetative uptake.  To detain stormwater runoff and remove suspended pollutants (TSS) in the underground detention unit, Lee used a total of 240 linear feet of thermoplastic pipe from Advanced Drainage Systems, Inc. (ADS) (NYSE: WMS).  The watertight 48-inch diameter ADS HP Storm pipe was installed in two parallel runs and can hold 22,500 gallons of runoff.  To make connections and to convey water from the roof, 12- and 15-inch ADS N-12® high-density polyethylene (HDPE) pipe was used along with six- and four-inch ADS N-12 dual wall perforated pipe as an underdrain for the bioretention basin and other areas.  Two ADS Nyloplast® EnviroHoodsTM were attached to the inside of two of the Nyloplast structures to prevent the outflow of floating debris and oil.

Three other InsertaTees were installed as underground inspection ports.  The crew also used 1,000 yards of geotextile fabric along the side walls of the excavation to keep fines from migrating into the #57 stone backfill.

The HP Storm high-performance polypropylene (PP) pipe for gravity-flow storm drainage applications provides stiffness and premium joint performance.  The ADS design couples advanced polypropylene resin technology with a proven, dual-wall profile design for superior performance and durability.  The pipe is corrosion resistant and is unaffected by salts, chemicals and hot soils.  Burial cover can range from one foot to 39 feet.  The pipe meets or exceeds ASTM F2881 and AASHTO M330.  “ADS has a good name in underground detention in our area,” Lee stated.  The Columbus-based firm has a manufacturing plant in Livermore, Kentucky and a distribution center in Lexington, plus other plants and yards in the region.  In total, ADS has 63 plants and 32 distribution centers worldwide.

Working alongside of Lee was Eric Dawalt, P.E., president of Ridgewater, LLC, a Winchester, Kentucky-based design/build firm.  “We were involved in the design and managed the construction of the project for Stantec, the engineer of record,” he explained.  “ADS and EcoGro (Lexington, KY) were also part of the team.  Together, we worked to find a solution to the site constraints.  It was the depth.  We had a really shallow depth that we had to put the system in and it had to be able to drain back into the existing storm sewer.  That’s why we went with the 48-inch pipe rather than a bigger diameter pipe or tanks.  We had only about six feet to work with and included the two feet of cover.  The ADS pipe had to connect back into an existing storm sewer with positive drainage.  That’s why we made the pipes long and skinny rather than big and fat.  We looked at fiberglass tanks and also field-welded corrugated metal pipe, which would be quite expensive because of the field installation cost, mainly because doing a weld inside a four-foot diameter pipe is quite laborious.

“The welded fittings were a critical component.  ADS did these at its nearby Winchester, Kentucky  plant.  This is a big plus for the ADS system over others that bid on the project because we didn’t have to do any field welds inside,” Dawalt continued.

“We just had to fit it together.  If there was one reason other than the price and materials, it was the installation of putting the pipes together that was a whole lot easier than getting a field crew out and welding the pipes together in the field.  That was a big solution that ADS was able to provide.  Can’t say enough about how easy the HP storm was to install.

“The system was not designed for a specific storm event.  What we were trying to do was provide the required detention volume that had been proposed in the grant,” Dawalt explained.  “One of the other things we were able to do, was, which wasn’t necessarily part of the grant and Chad paid for it, to put in the EnviroHood water quality units that have a baffle system to get out any trash, and it works great.,” Dawalt said.

“In doing this old building,” Needham stated, “we wanted to make it a little more ecologically friendly and do a stormwater project here, and that was kind of cool.  I think that also makes us unique as we’re a developer, and definitely an urban developer.  The stormwater system also makes financial sense especially since we got a really nice grant from the city when we presented the plan.  I was not familiar with the pipe and so I was really excited when all that pipe got delivered on the truck.  But that was a cool way to use that pipe, and I really hadn’t known that before.  We were excited that Sam and Eric brought that to the table.  It was a cool idea and a cool plan.  We’re pleased with it.

“It’s always fun to talk about on a tour.  People seem very interested in taking an old building and bringing in some new conservation techniques.  This method is a good example of how it can done for an old building of this size and at what scale you have to do that.  It can be done.  Plus, it’s a great tool for me to talk about to prospective tenants and a great neighborhood discussion.  Also, it just brings a new layer of appreciation on top of an old building being redone.  That I think speaks to definitely the general public and to new tenants.”

The Greyline project will also serve as stormwater educational center for local universities, engineers, contractors, surrounding municipalities and other local organizations including the Kentucky Stormwater Association, which will give tours of Greyline during its conferences and meetings.  There is a permanent educational display to explain the stormwater system and its resulting benefits to visitors.

Additional information can be found at the ADS website:  www.adspipe.com.

Advanced Drainage Systems is a leading provider of innovative water management solutions in the stormwater and on-site septic wastewater industries, providing superior drainage solutions for use in the construction and agriculture marketplace. For over 50 years, the Company has been manufacturing a variety of innovative and environmentally friendly alternatives to traditional materials. Its innovative products are used across a broad range of end markets and applications, including non-residential, residential, infrastructure and agriculture applications. The Company has established a leading position in many of these end markets by leveraging its national sales and distribution platform, overall product breadth and scale and manufacturing excellence. Founded in 1966, the Company operates a global network of 63 manufacturing plants and 32 distribution centers. To learn more about the ADS, please visit the Company’s website atwww.adspipe.com.