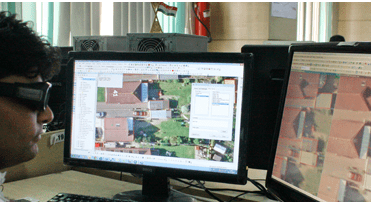 COWI has a successful track record in 3D city modelling for both small and large cities throughout Europe and the Middle East. In November 2013 they were awarded the nation-wide 3D roof modelling project of Switzerland for the Swiss National Mapping Agency – the Federal Office of Topography swisstopo.

The Topographic Landscape Model (TLM) of Switzerland
Swisstopo captures and maintains the definitive and state-of-the-art topographic landscape model of Switzerland. This model serves as the nationwide geospatial dataset and describes both natural and man-made objects of the landscape as 3D vectors.

3D modelling of 2.4 million building roofs over the next three years
For the topographic landscape model, the roofs of all buildings in Switzerland are to be captured in 3D. Swisstopo has made a start in capturing some of the3 million roofs and has now awarded a 3 year framework contract to COWI to complete the accurate photogrammetric 3D modelling of the remaining 2.4 million building roofs. The project will run until end of 2016.