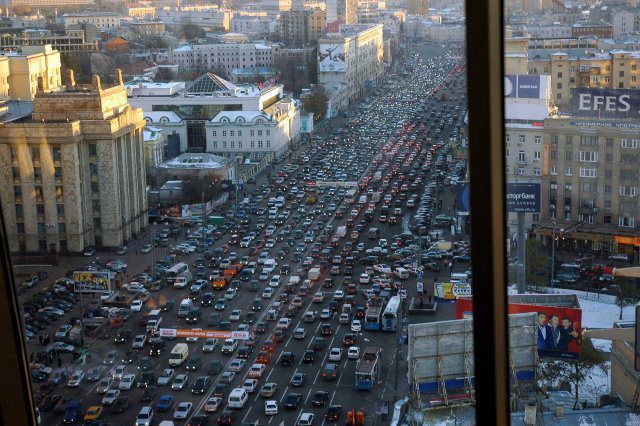 The technological company Worldsensing, based in London and Barcelona, along with the Russian company ITS, is deploying the largest intelligent parking project in the world in Moscow. According to The Moscow Times, the Russian capital is the most congested city in the world, followed by Istanbul, Warsaw and Marseille.

As an answer to this problem, the City Government decided upon the intelligent parking system Fastprk, designed by Worldsensing.  The pioneering solution allows the drivers to know the exact position of the nearest parking space, via a mobile app or through street panels, reducing the time spent looking and, thereby, significantly reducing congestion.

The technology was initially trialled during the Russian winter of 2011/12, when 1,000 sensors were installed. The results were outstanding: the system not only proved its value, but also worked reliably in the extreme conditions of the Russian winter. The second phase was completed in May 2013, when an additional 2,000 sensors were deployed. The project is now on its third stage, with the installation of 11,000 additional sensors taking place during November and December 2013.

The plan, for the coming years, is to continue to grow the number of sensors, providing continuity to this project, which is driving the city forward.

Fastprk- the technology with benefits for the whole city

Fastprk is a solution based on wireless sensors installed in each on-street parking bay allowing users to know where to find a parking spot, via a mobile app or through electronic street panels.

The solution is also beneficial for the local government, as it allows them to manage their urban parking areas optimally. Fastprk enables them to know, for instance, which the most frequented areas are and during which times of day.

The system is ready to be connected to any paying platform. This allows dynamic pricing to be established in order to promote certain areas or times of day, thereby significantly reducing congestion within the city centres.

Fastprk also allows the authorities to optimize enforcement of traffic laws within the payment areas, as it allows the controllers to know exactly where infringing vehicles are, via an app.

Fastprk is a useful tool for cities that need to control free but limited-time parking areas as well.  Also exclusive-use parking bays (disabled, residents…) can benefit from the system, as the sensors are ready to identify the parked vehicle.

There are several benefits of the Fastprk system; by reducing the time for parking, the traffic density is reduced and the user saves fuel and time, and by reducing CO2 emissions the city becomes greener and a more pleasant place to live.

Worldsensing is a technology company, created in 2008 in Barcelona, which designs and develops pioneering wireless technological solutions based on machine-to-machine (M2M) communications.

After the first stage of the Fastprk deployment in Moscow, in November 2012, Worldsensing became one of the 17 companies that, according to Pike Research, shape the Smart City ecosystem. Since then, the company has grown exponentially, selling its solutions in countries such as USA, Middle East, and China.

1-Smart Cities, with Fastprk as a main product

2-Smart Infrastructures, launching Loadsensing, which offers sensing solutions that enable for the predictive maintenance and monitoring of large infrastructures

3-Smart Acquisition, deploying Spidernano, one of the most advanced wireless seismic acquisition systems.

Today, the company employs 30 engineers and executives based in its London and Barcelona offices.

Comments are disabled
NEXT ARTICLE
Rise of the Wise: Next Steps for Smart Cities
December 18, 2013
PREVIOUS ARTICLE
Hoboken Looks to be a Model for Urban Flood Protection
December 17, 2013