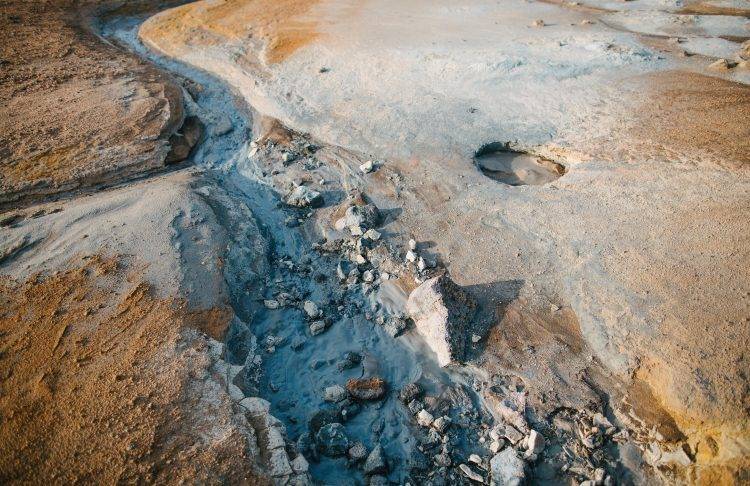 The natural environment exists in a state of slow, but steady, change, and the same forces that shape the earth inevitably impact any infrastructure built on it. In earth science, erosion results from surface processes that move soil, rock and dissolved material from one place to another. Although erosion is a natural occurrence existing wherever soil conditions and climatic instigators collide, frequently the built environment is a compounding force that accelerates the movement of earthen material downslope.

While nature dictates the when and where of erosion, earth-disturbing infrastructure can lead to erosion that damages the surrounding ecosystem while increasing required maintenance and negatively impacting downstream water-treatment systems inundated by sediment. Although nature is relentless, innovation is the lifeblood of engineering and building industries. As conditions change, so do the means, methods and materials used to solve erosion challenges.

According to the U.S. Department of Agriculture (USDA) “Erosion Control Treatment and Selection Guide,” there are six general principles for effective erosion control:

4. Limiting the soils’ exposure to water and wind by increasing slope vegetation is an effective and inexpensive way to reduce erosion.

6. Most erosion-control strategies, whether organic or synthetic, require routine maintenance to remain effective.

In addition to water, wind and gravity, the regular presence of ice or chemical contaminants in runoff form a spectrum of conditions that cause erosion, requiring consideration wherever mitigation strategies are attempted. Further, where there’s increased erosion risk or consequences, there’s an increased need for specialized expertise in geotechnical engineering, hydrology, soil science and agronomy. The USDA’s “Erosion Control and Treatment Guide,” developed in conjunction with the U.S. Department of Transportation, identifies a series of causal relationships that compel soil displacement.

Water-caused erosion or interrill erosion is a two-part process: the first part occurs wherever rain impacts exposed soil and disrupts particles on the surface; the second part occurs when gathering rainwater forms a shallow surface flow, referred to as sheet erosion. In the case of water-caused erosion, the effect of erosive rainwater intertwines with the affected soil’s erodibility; length and steepness of slope; amount of vegetation protecting the soil; and duration, intensity and frequency of rain events. 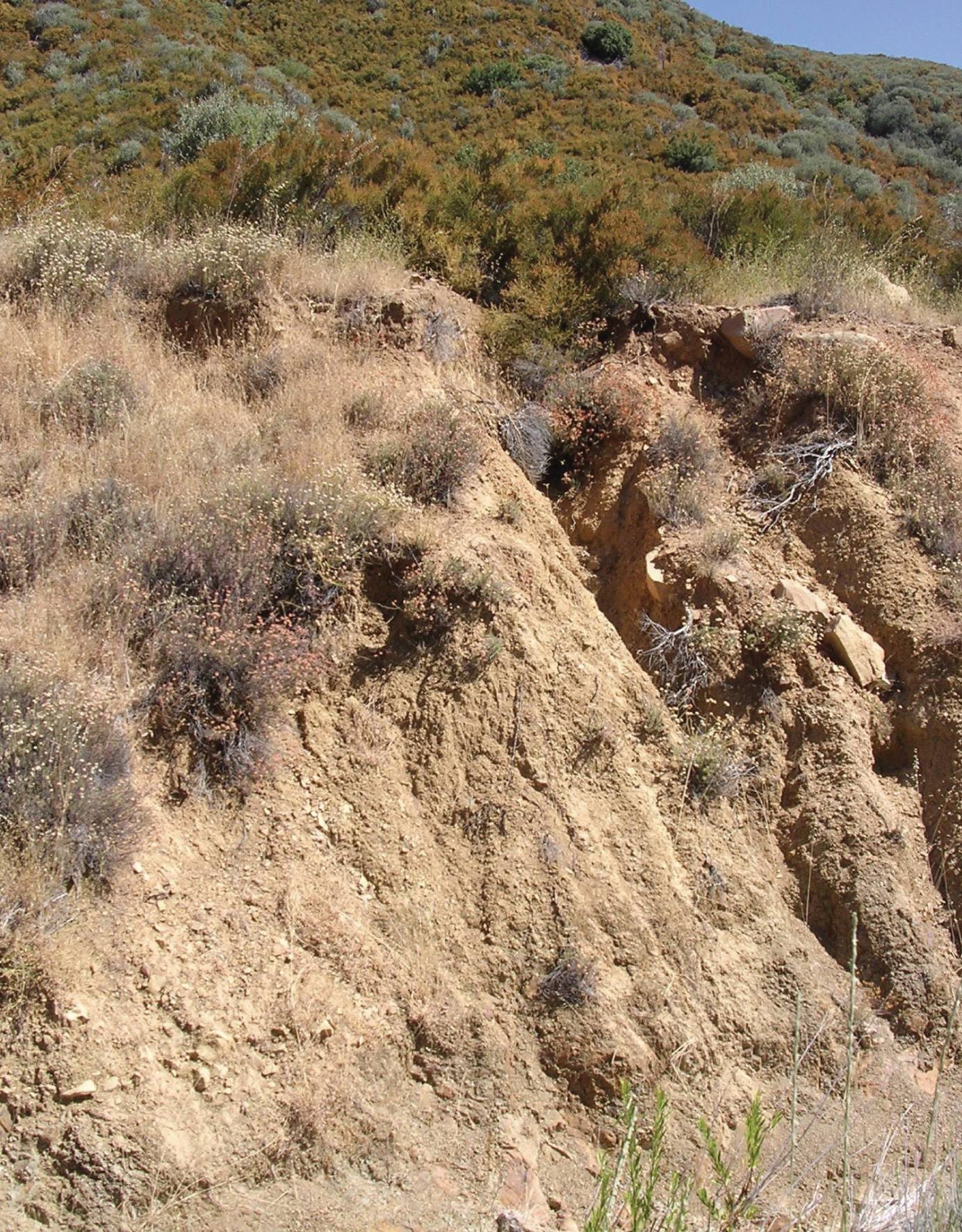 Rill erosion occurs when rainwater or runoff accumulation on a built source (such as a road) develops micro-channels that can be more than an inch wide and several inches deep. The accumulation and duration of a direct stream of water combine with the soil’s erodibility and slope steepness to create these micro-channels. Through time, as the volume of eroded material increases, the number of rills increases, and eventually, if untreated, rill erosion conditions will advance to gully erosion. 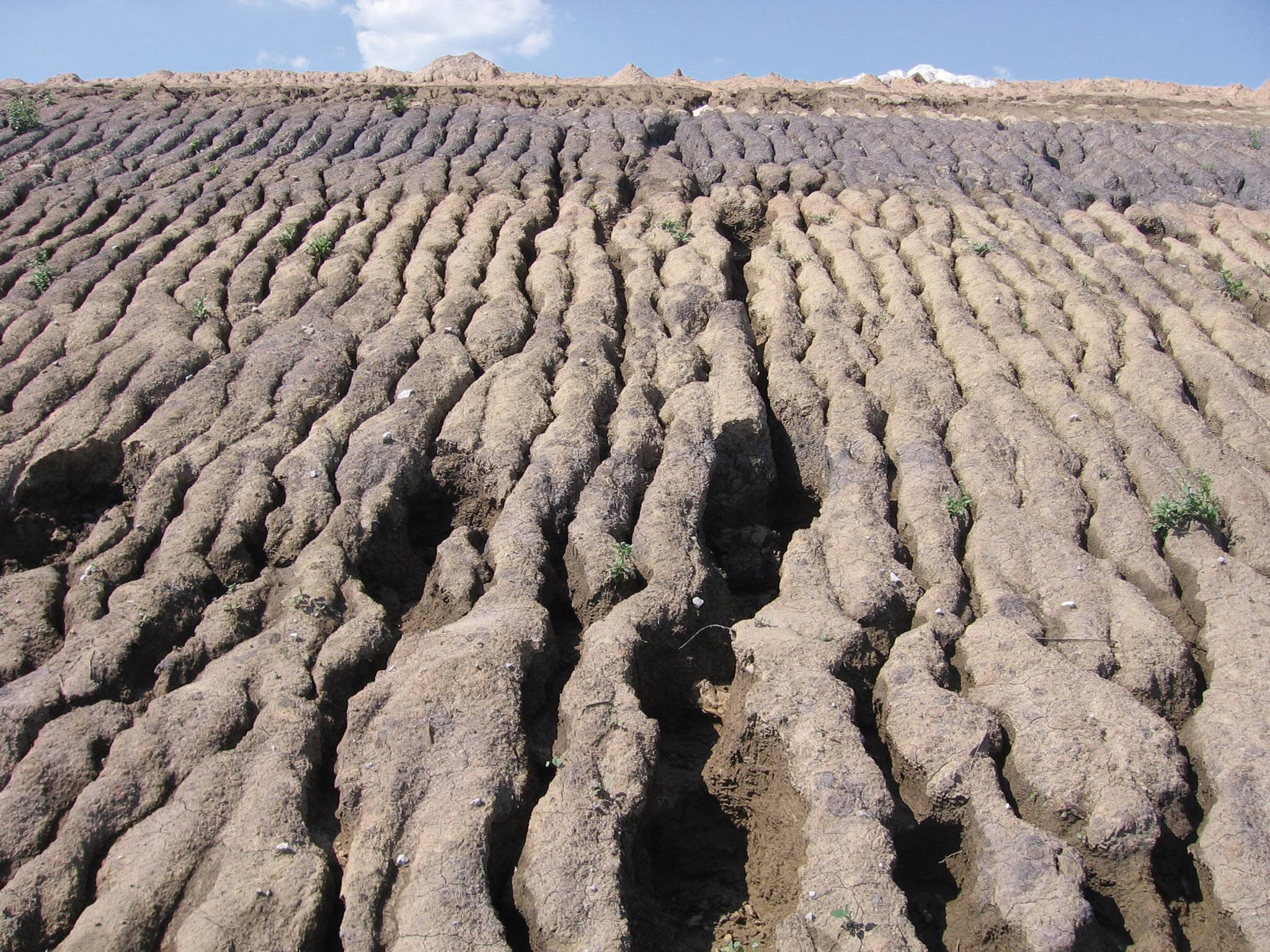 Channel and coastal erosion differ from gully erosion primarily in the width-to-depth ratio, with affected slopes being shallower, and water flows being more consistent and often continual. As with coastal erosion caused by wave action, a multitude of factors combine to compel erosion in a complex interaction.

Seepage erosion happens when soil is displaced by water flowing through bedrock. The soil may be permeable or the bedrock jointed, allowing seepage. This form may occur as part of other erosion processes such as channel, mass movement or chemical erosion. 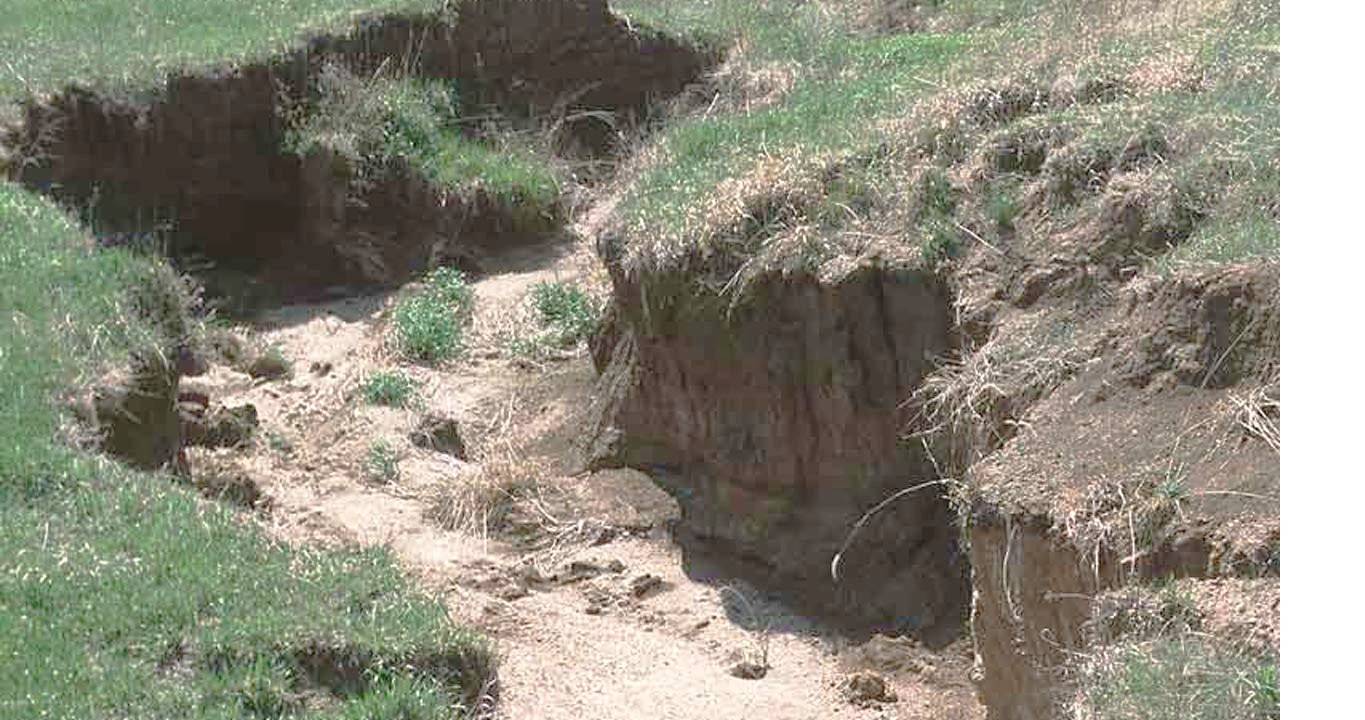 Gravity-caused or dry-ravel erosion occurs when surface particles become excessively dry, losing cohesion. It’s frequently distinguished by a lack of rills or other water-erosion characteristics and is noteworthy for the large volume of material deposited at the bottom of the slope.

Mass-movement erosion is a mass of earth, rock or debris moving downslope. Landslides and debris flows often are the result of complicated surface and subsurface situations that are challenging and expensive to resolve.

Wind-caused erosion happens in dry climates on slopes frequently exposed to high winds. Surface soil particles are lifted by high winds and moved downslope either suddenly in a significant event or through time in a series of small events. 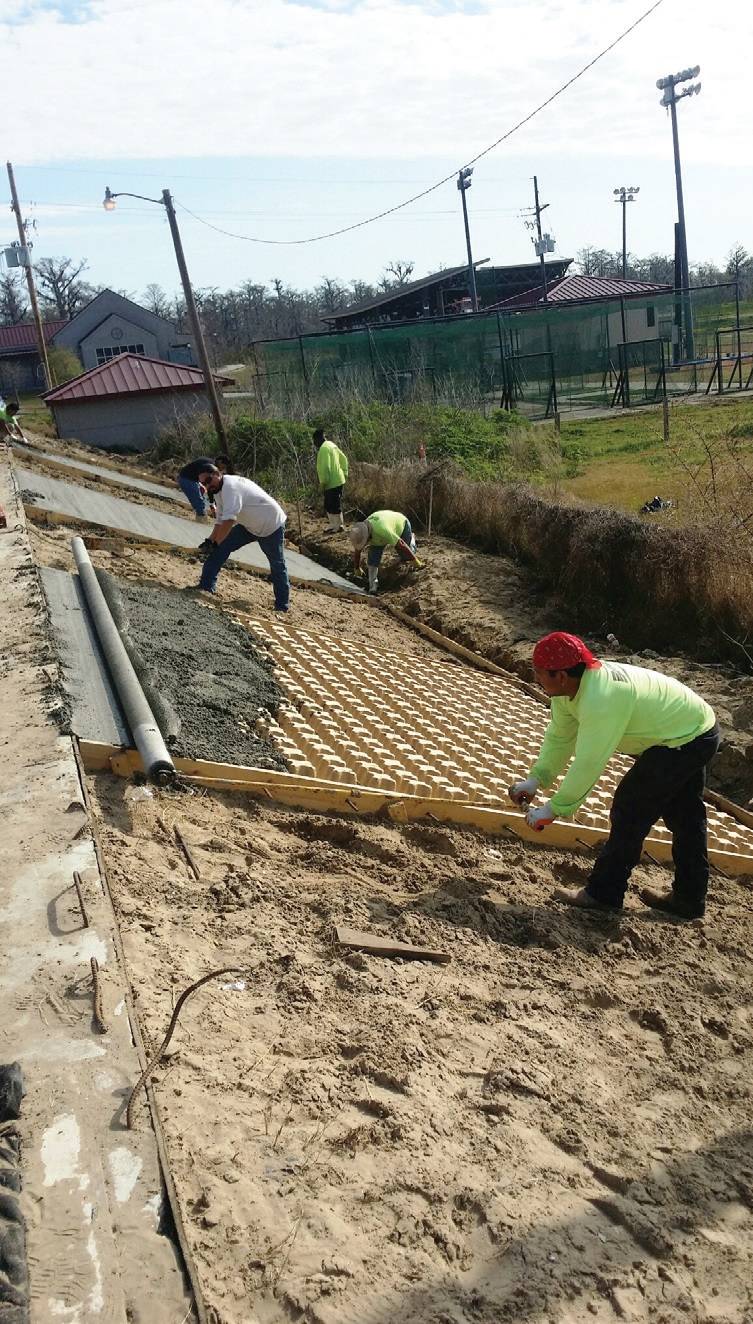 Grasscrete is one of several hard-armor slope-stabilization strategies employed to mitigate the corrosive effects of runoff in conditions that are regularly wet. (Bomanite of New Orleans)

Ice-caused erosion or freeze/thaw erosion results from the expansion of freezing water and the contraction of thawing ice. This affects frost-susceptible soils, which are loosened and displaced by the changing climatic conditions. On a much larger scale, glacier erosion happens when tremendous volumes of ice entrap rock, soil and earthen materials and then move by gravity through time.

Chemical-caused erosion occurs as a reaction to chemical substances that are foreign to the soil conditions. Rock, soil and debris dissolved by chemical interactions cause the slope to become more susceptible to movement caused by water, wind or gravity and can lead to the formation of sinkholes in limestone.

The most significant differentiator in a slope’s susceptibility to erosion is soil type. According to the American Society for Testing and Materials (ASTM) Unified Soil Classification System, there are three major soil divisions: coarse-grained soils, fine-grained soils and highly organic soils. The divisions are based on a soil’s particle size, liquid limit and plasticity index, and they’re further subdivided into 15 basic groups of soils.

Under the proper conditions, any of these soil types are prone to mass movement. Seepage erosion typically only occurs in soils with enough permeability to allow water to pass through them and soil particles small enough to be easily moved. There’s a limited risk of seepage in gravels, which are highly permeable but have large particles, or clays, which have small particles but limited permeability. Dispersive clays represent a noteworthy exception as they’re highly erodible. Loamy sands are prone to surface sealing, which increases the surface’s capacity for runoff.

Soil density also is a consideration. The denser the soil, the lower the permeability, which restricts root growth. The nutrient and chemical properties of soil also affect vegetation establishment. Manmade infrastructure, such as a road or a building, can also restrict vegetative growth by segregating natural mineral movement to one side of the intrusion.

Controlling erosion typically is a two-phase process combining short-term solutions with establishing vegetation as a means of long-term control. In very steep or severe conditions, a structural solution involving retaining walls or other biotechnical stabilization methods may be required. Erosion-control strategies can be categorized into six methodologies as follows:

Grade-related treatments are incorporated to reduce slope steepness to increase stability. Grading and shaping the slope is a low-cost solution involving flattening the slope to control runoff using excavation and soil-compaction equipment. Soil roughening loosens the soil to improve vegetation establishment. Tracking involves using cleated construction equipment to roughen soil to increase water infiltration while trapping sediment within indentations and promoting seed germination of vegetation. Terraces involve cutting bench-like embankments into a slope to control the direction of runoff flows and improve water infiltration along the way. Constructed wattles break a slope into a series of smaller slopes by installing linear features such as rock walls, woven wooden fences or logs on the surface contour to delineate and direct water flows. Manufactured wattles are similar but involve using wattle made from natural materials such as wheat straw or flax encased in netting tubes to divide slopes and control runoff.

Seed, fertilizer and soil amendments involve broadcasting supplemental seeds and nutrients across the slope to increase vegetative growth. Increasing seed volumes helps control erosion when germination begins by encouraging water retention. Although less expensive than other erosion-control strategies, these methods have limited effectiveness on steep slopes or areas subjected to more than one type of erosion. They often require multiple applications and routine maintenance.

Soil stabilizers and tackifiers are organic and inorganic products applied to the soil surface that create a protective film or penetrate the soil and bind particles together. These aid in vegetation establishment by reducing seed loss and evaporation. They’re often used in conjunction with hydraulic mulch to encourage vegetation in dry climates periodically subjected to high-intensity rainfall on sandy loam slopes.

Mulch is an organic or inorganic material placed on the ground surface to assist germination, water retention and vegetation establishment. Examples include straw, pine needles, shredded wood, recycled paper/pulp and hydraulic mulches made from combinations of the others. Generally, mulches are classified by fiber length: straw, hay and shredded hardwood bark are defined as long-fibered mulch; and wood fibers, hydraulic mulch, cellulose, and paper are defined as short-fibered mulch.

Rolled erosion products can be organic or synthetic nets, mats or rolls laid flat on the slope to reduce surface erosion. Most-effective against splash, sheet and rill erosion, rolled products create a surface-level layer within which mulch and vegetation are anchored to a slope subjected to low- to moderate-velocity flows. Mulch-control nets, open-weave textiles and erosion-control blankets often are biodegradable and naturally subsumed by the earth after vegetation is established. 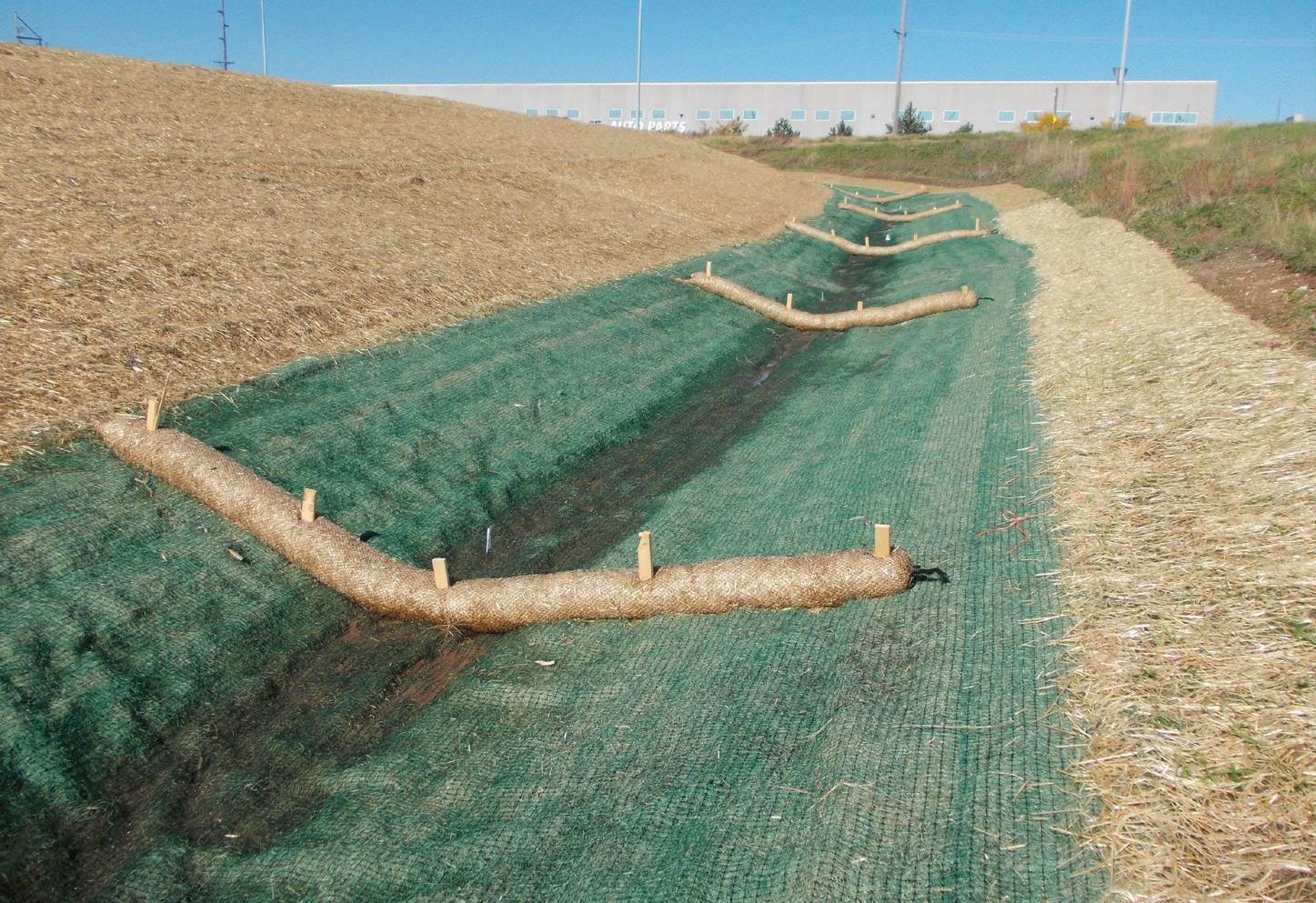 Hard-armor systems involve any combination of natural rock or synthetic geocellular containment systems used to stabilize a slope by increasing surface strength. These solutions typically are integrated on steep slopes or sites with cohesionless soils such as sand. They reduce runoff velocity while encouraging water infiltration on challenging sites with compounding conditions.

Soil bioengineering involves planting live, rootable vegetative cuttings into the ground to create a living barrier against erosion through buttressing. If properly nurtured, plantings will grow into a blanket of vegetation. Techniques include bundling rootable plant materials placed in shallow trenches, creating willow fences of pole-supported plantings, and alternating between live branch cuttings and compacted fill supported by wooden stakes.

In almost every case, erosion can be controlled. Doing so effectively requires a thoughtful assessment and a thorough understanding of the causes of erosion. When conditions are known, treatment selection is equally important.

In some cases, readily available and completely natural materials provide effective resolution. In others, specialized geotechnical and civil engineering expertise as well as specialized and potentially expensive methods are imperative. In all cases, one thing is certain: nature remains relentless. Working with nature rather than against it will always be the most-effective solution to any erosion challenge.

Sean O'Keefe is an architecture and construction writer who crafts stories and content based on 20 years of experience and a keen interest in the people who make projects happen; email: [email protected]