In a short period of time, Building Information Modeling (BIM) has taken over as a driving force in the infrastructure design, engineering, construction, and maintenance world. A good place to marvel at this broad adoption, and the resulting efficiencies, was at this year’s Autodesk Infrastructure Symposium that took place in Las Vegas on Monday, Dec. 2. The event has quickly grown from 50 people in 2009 to a capacity crowd of 800 people this year.

Lisa Campbell, vice president Industry Strategy and Marketing, AEC/ENI at Autodesk, welcomed the audience, with a focus on transformative technology as told through customer case studies. Technology is allowing for whole new approaches to projects.

Among the technologies that are making a difference in the infrastructure space are:

Rather than focus on crumbling infrastructure, and the demand for projects, Campbell focused on global best practices examples to communicate project success, with four examples that include:

The program for the Infrastructure Symposium included an overview of technology advancements and customer case studies as well as breakouts for Transportation, BIM Best Practices, and Utilities.

While the event wasn’t focused so much on Autodesk products, but instead their application, there were several displays of technology that showed how the development and marketing team are focused on customer advancement.

Jack Strongitharm, civil industry manager, ISM at Autodesk discussed the evolution of survey technology and data capture, where GPS has led to scanning technology and the use of unmanned aerial systems (UAS) to capture imagery and models. At the early stage there’s a need to capture for contextual information before the project starts. A quadrocopter was used to create a model in Las Vegas for recreational purpose with a detailed scene captured in ten minutes and processed and modeled using Recap Photo. The project used a $10,000 custom copter, and also a $2,000 copter, comparing the results from both — proving both are useful and that the technology is quickly democratizing and getting cheaper.

Lynda Sharkey, program manager, sustainability at Autodesk spoke about modeling sustainability and the ability to simulate performance with a triple bottom line benefit (people, planet, profit). Using Low Impact Development for Sites, different green elements were added to a model of a site in San Francisco to work toward sustainability goals with scoring happening as the model was embellished with rain gardens and other site amenities. The modeling was also done to include Walkscore and transit accessibility, understanding the gallons of gas saved and net carbon emissions. 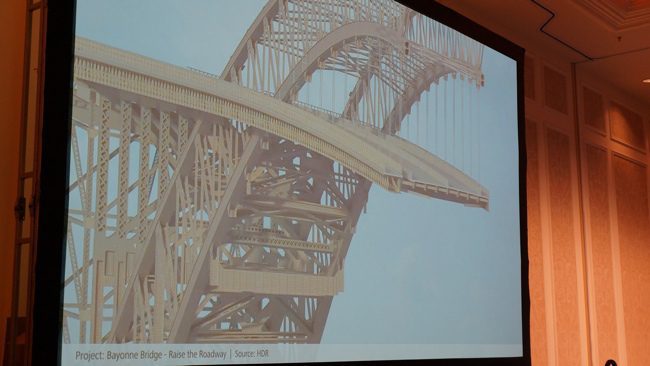 This detailed model from HDR of the Bayonne Bridge illustrates the level of detail and real-world context of today’s modeling technology.

The next panel took on construction coordination with Building Information Modeling.

The technology showcase illustrated the latest uses of technology in practice, with Autodesk customers showing each other their approaches and lessons learned.

With all the technology change taking place, organizations are struggling to make the most of the transformation. Terry Bennett, Senior Industry Manager, Civil Engineering & Construction at Autodesk moderated a session on BIM Best Practices. The panel included a wide perspective on current BIM practice as well as the goals and the benefits. 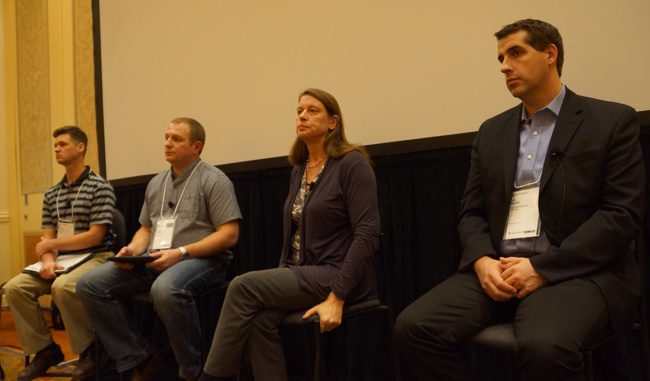 The BIM Best Practices Panel included from left to right, Keith Sowinsky from the Wisconsin Department of Transportation, Julian Jameson from Gatwick Airport, Anne Kemp from Atkins, and Cory Dippold from Hatch Mott MacDonald. Panel member Eddy Krygiel from HNTB was not captured in this shot.

Keith Sowinsky, with the Methods Development Team at the Wisconsin Department of Transportation (WisDOT) is involved in the implementation of BIM, and the development of a 3D technologies implementation plan

Julian Jameson, BIM Coordinator at Gatwick Airport spoke to Revit usage in the Construction Department and a four-year integration and BIM process implementation with education and R&D work

Anne Kemp, director, BIM Strategy and Implementation at Atkins and chair of the Association of Geographic Information is working with the UK government initiative to enable all departments to be intelligent procurers of digital information

Cory Dippold, project technologies group director with Hatch Mott MacDonald has been the BIM Champion for the company for the past six years and has recently become the project technologies director to look at the use of digital design tools and processes throughout the 3,000-people and 70-office operations of this civil infrastructure firm

Eddy Krygiel, director of design technology at HNTB works on infrastructure projects of many scales including transit, aviation, and rail. The firm uses a lot of LiDAR and BIM, to meet and exceed project objectives.

When asked how BIM can improve alignment between owners and service providers, the panel responded:

Sowinsky: We have worked with contractors to improve communication with consistency in the content to remove uncertainty in the bidding and building process. The contractors want to know in order to have confidence in their prices. The owner wants consistency in the data format, using the model through the lifecycle. The bottom line is that BIM improves cost through better certainty.

Jameson: Discussed the problem of requesting BIM off the shelf, with give and take between expectation and what the contractor delivered. The common sense initiatives that the government is promoting is tailoring the BIM deliverable with what is needed. The struggle with maturity of their workforce is a factor in achieving greater consistency, helping those that need a degree of training.

Kemp: Data spreads like a virus, with a need to set guidelines and focus on answering questions with better intelligence and communication to make better decisions, rather than just mandating the delivery of data. The dream is collaborative workflows with an engaged conversation.

Dippold: BIM is in a transient time right now, with nobody really out ahead. On the client side some have established standards, but others don’t really know what it means. There’s an ongoing need for a candid discussion on what the technology can do — capturing opportunities or solving a problem. The model and technology need to underpin efforts, with the level of detail determined based upon a commercial need and benefits. Maturity is happening on how well developed and coordinated the model needs to be, with appropriate level of use for various needs (costing, clash detection, etc.) The industry needs to come together on different classes so that everyone understands the data that is needed and what it can be used for.

Krygiel: The importance of proper planning is something that went very well at the Denver International Airport, with questions to all teams on the client side to understand what everyone wants from the model, down to electricians and even the ground crew. The chaotic project process was improved with good planning, and with the realization that accurate model data could be re-used to reduce rework. The BIM implementation plan was a great help in the process.

The hand-off between service providers and the owners is something that each panelist weighed in on:

Krygiel: With a wide-range of people working on the job,  260 different firms, there is a need to homogenize and provide education to help them understand and create deliverables.

Dippold: The rate of technology adoption includes arguments over technology that didn’t exist when project contracts were signed. The stuff happening today was science fiction three years ago, with a great deal of impact on workflows. In the past, so many meetings were held to review drawings. Now with iPads, those meetings aren’t happening and the project is sped up. There is a new level of trust needed in the industry with this new model-based approach.

Kemp: There is the need to involve the right people early on, including the asset manager and facility manager, accomplishing everyone’s goals and building a trusting relationship from the start for the right information flow. Training development is a big issue, with workshops taking place and different team members assisting with the training process.

Jameson: Contracts for the box of BIM aren’t helpful, and when you push new technology in the middle of a project people resist the change. A lot of work internally is done on the Gatwick brand in terms of customer service, but in construction that hasn’t been the focus. That is changing now, with a discussion of the approach and an ownership that is a helpful give and take relationship.

Sowinsky: Not wanting to be the one chasing the ball, but to be where the ball is rolling. All projects from 2014 on will have to deliver a Civil3D project so that they’re all talking the same language. With larger projects, contracts are separated into 30% increments in order to be able to incorporate newer technologies.

Among the items on the wish list for what service providers can give to owners are:

Jameson: Wanting contractors to be more honest about where they are in the BIM process, what they know versus marketing hype. Knowing they will get to the end goal faster by not pretending they know more than what they know.

Kemp: There’s a need to level with each other, and acknowledge that we’re on a journey to exploit the technology for its best benefit.

Dippold: The technology should be leveraged for the betterment of the project. He keeps a “They” sign with a slash through it in order to reduce the finger pointing and blaming. When CAD was new, the same technologies carried through, and now there’s a great shift in workflow to improve the process and deliver better projects. Working with strong owners and partners, with those that take the time to vest themselves in what the technology can deliver, results in better projects. The best model in the world is just intended to ensure that the concrete and the steel land in the right place.

Krygiel: The sum of the parts can be greater than the whole, with the digital and real model making sure that everyone wins.

As a wrap-up on the panel, we now have mandates both in the United Kingdom and with new processes such as Map-21 for highway modeling and construction. There are differing opinions about the process and objectives, and with such guidelines and implementation planning there are needs for ongoing dialogue.

The awards for the second annual Autodesk Excellence in Infrastructure competition were awarded at this event, with many of the awardees speaking at the event. The jury chose winners among a diverse array of infrastructure projects that included transportation, land development, urban planning, water/wastewater, and energy.

The call for submissions is already posted about the Autodesk Excellence in Infrastructure 2014 awards, with submissions open starting December 16. I expect we’ll see a continued exponential growth of submissions and projects presented at next year’s Infrastructure Symposium as BIM continues to make inroads for more efficient and better performing projects. 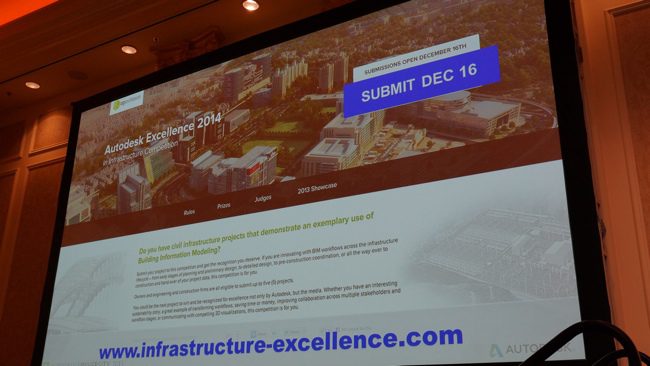