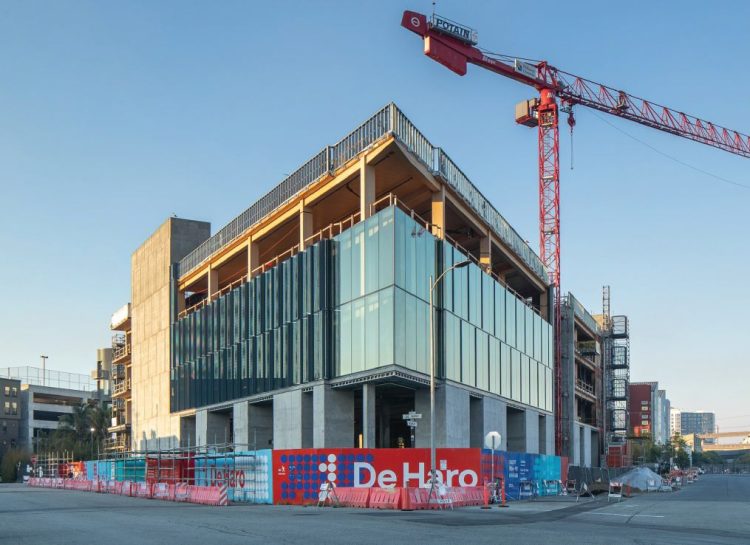 Recent changes to California’s mass timber regulations have expanded opportunities for building design and construction that increasingly leverage the benefits of wood.

Code changes went into effect July 2021 as an early adoption of what will be in the next formal code cycle, notes Anders Carpenter, mass timber expert and senior project manager as well as senior associate at Perkins&Will, San Francisco. Projects under the 2019 California building code could move forward on a permit pursuing the new compliance path, he adds. Type IV for heavy timber was an older construction method utilizing cut-wood members from felled trees.

Previous mass timber projects had restrictive height, area and fire-rating requirements, explains Carpenter, adding that it could be difficult to find compliance in some jurisdictions, necessitating more engineering judgment reports and additional testing.

Regulation changes segment Type IV construction into three new categories: A, B and C. While minimum size requirements for columns and beams remain the same, the three new subtypes change the allowable height, and area has been increased for a tall wood building:

For example, Perkins&Will is working on a Type IV C construction of an eight-floor mid-rise graduate student housing project that doesn’t require concealment of the wood.

The new code paves the way for much greater height and stories previously not allowed in America nor in California until recently, says Covall. “Mass timber is inherently much lighter. Being able to go taller is adding more stories, allowing us to see savings from foundations being reduced substantially,” he adds.

Previous codes restricted a drop ceiling from being below a mass timber panel, slab and assemblies. “They would either have to be filled with insulation, or you couldn’t run the building systems based on the limitations of doing that,” notes Carpenter. “If you needed an acoustical ceiling in a space, it became difficult.

“Now the building can be sprinklered throughout; or if the concealed space uses a noncombustible installation or you line it with gypsum board, you are allowed to have something like a drop ceiling in a mass timber project,” he adds. 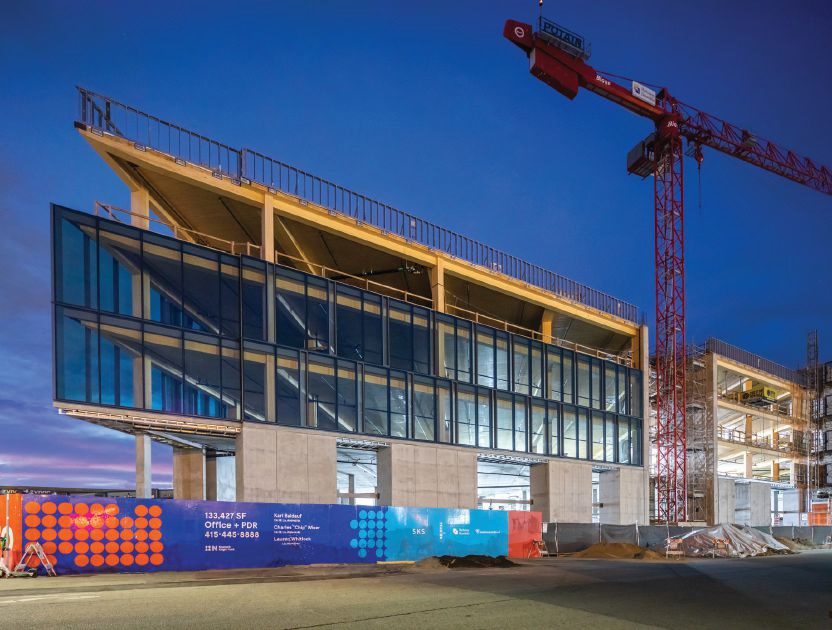 De Haro is designed with a concrete podium for production, distribution and repair uses; with mass timber levels above for office space.

Structural integrity is derived by wood being inherently flexible and resilient, notes Carpenter, adding that within California code, steel or concrete lateral systems need to supplement the wood.

“Concrete is being used in conjunction with the timber more often as a topping slab due primarily to vibration and acoustics,” says Dalton Ho, LEED architect and senior sustainable building advisor, Perkins&Will.

As for fire protection, misconceptions abound regarding mass timber. “Wood is thought of in black-and-white terms of being a combustible material—that it will burn easily and is less safe than a steel or concrete building,” notes Carpenter. “Actually, these mass timber projects have a pretty effective resistance, even if the material is not covered up and the wood is burning or if the fire has burned through any coverage and it gets to the wood.”

“Mass timber is so [dense] that you might get in the hour or two hours it’s rated for, depending on the building code furnished for that specific project,” says Covall. “It might smolder and char to a certain depth, but it will not fully ignite in that amount of time.” That time frame enables people to exit the building and fire crews to respond, he adds.

A significant difference in the new Type IV subtypes is the elimination of the one-hour fire rating for noncombustible, non-load bearing walls and wood stud walls, which previously had to be protected with fire putty as well as fire and smoke dampers to meet the code.

“Under this new code implementation, if a partition did not require a fire rating for occupancy separation, it wouldn’t need that additional treatment,” adds Carpenter.

Comparisons to Other Materials

“Since they are growing in about 80 years, the building will still be here,” Covall says, adding that extraction of ore or materials for concrete or steel is not replenished.

“There’s debate about how you quantify the amount of carbon sequestration with wood because it is tied to the material’s carbon lifecycle analysis: supply chain, forestry practices and material disposal,” notes Carpenter, adding that each factor can lead to a better or less optimal outcome. 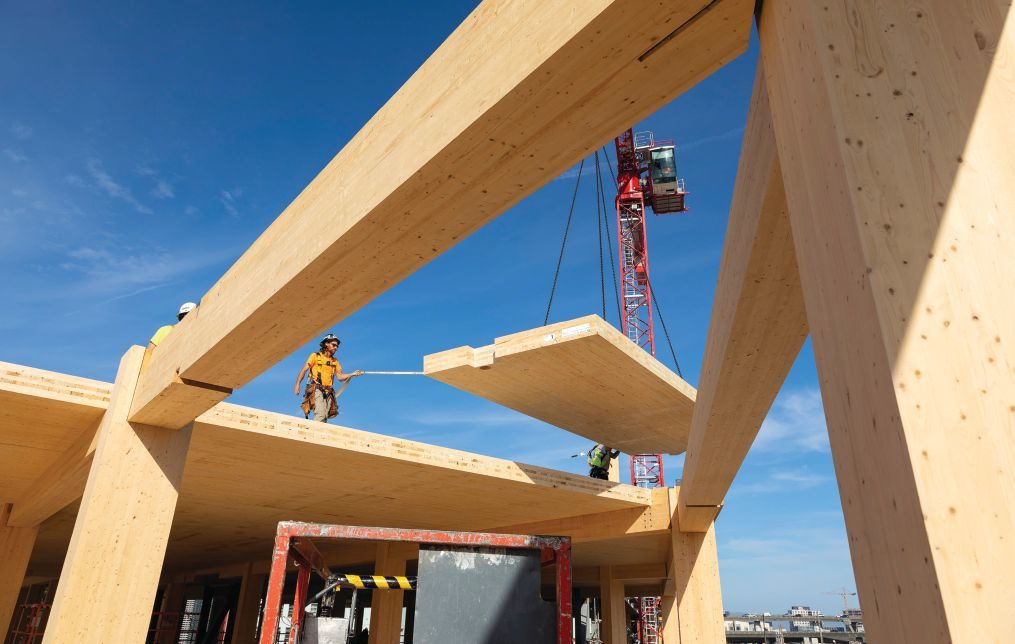 As the only naturally renewable building material, mass timber provides benefits in reductions in foundation, transportation, energy and installation ease, according to Ho. Perkins&Will considers salvaged wood or reuse, if possible, the best way to reduce the carbon footprint.

Timber certified by the Forest Stewardship Council, Sustainable Forestry Initiative or Programme for the Endorsement of Forest Certification (see “Editor’s Note”) ensures it’s coming from responsibly managed forests, notes Carpenter. It also reflects positively on client projects’ commitment to sustainability and innovation, “doing what’s right for people and the planet through what they build on their land,” he adds.

Energy benefits abound, the architects point out. “These projects, in tandem with modular mechanical, electrical and plumbing (MEP), force us to think about the systems holistically early in a project and do a lot of energy modeling and benchmarking,” explains Carpenter.

“Even if you remove mass timber’s sequestering potential, it’s still a lower-embodied energy product compared to concrete and steel by upwards of 20 percent just in production alone,” says Ho.

Timber products can be flat-packed, with transportation energy of the light material greatly reduced. “Timber naturally lends itself well to high-performance and energy-efficient buildings,” says Ho. “It’s naturally a more insulated material than concrete or steel. Because it’s precision-manufactured offsite to very accurate dimensions, you can build buildings with a tighter building envelope with much lower air infiltration, often driving energy consumption.”

Carpenter adds that shorter construction schedules and site logistics provide economic benefits. “The streamlined coordination and tolerances with mass timber projects as being largely prefabricated are down to a 16th of an inch compared to steel and concrete requirements, which are more like an inch,” he says.

“Mass timber projects, in conjunction with a modular MEP system that can be partially prefabricated, can come together seamlessly onsite,” adds Carpenter. “There’s less field correction and less scheduled risk. In many cases, the final structure becomes the final finish with the wood.”

For the graduate student housing project, an analysis of using mass timber vs. concrete concluded the mass timber version was 15 percent faster to build with a 25 percent savings on foundations.

“Because of some of the other nuances of building in mass timber, it leveled out to about a 10- to 15-percent savings in overall costs when compared to the concrete baseline building,” notes Carpenter.

Truncated construction time helps clients’ timelines. “In the case of a student housing project, a university may have a timeline to move through,” says Carpenter. “If a developer’s performance is directly related to a moving date, the shorter construction time equates to a more financially feasible or successful project.”

Cash flow curves of mass timber projects require a shorter financing schedule, but its sequence in the overall project timeline is more front-loaded. Carpenter says it’s critical to have a predictable construction timeline for material warehousing until it’s ready to be installed, as it can be challenging to get it delivered on the exact day needed. Some clients may not want to frontload costs or pay extra for warehousing.

“The material will be fabricated earlier,” adds Carpenter. “An owner has to know they are bringing on the general contractor and subs earlier.”

With projects coming together faster, there’s less weather exposure to components onsite during construction, which means less product replacement due to weathering.

The socio-cultural benefits of using mass timber—depending on a project’s location and supply chain—can help support a regional economy, Carpenter notes, adding that fabrication outside the United States negates the benefits derived by local sourcing.

Construction crews—requiring fewer people with mass timber—operate with less noise and dust, which also benefits neighbors. “In many cases, CLT projects are easier to assemble and less hard on the body than a steel or concrete building, because you’re assembling prefabricated components as opposed to doing tricky and time-intensive welds or concrete pours,” explains Ho.

“There’s also a biophilic connection to nature and the psychological benefits of being in a wood-finished space,” adds Carpenter. “The celebration of that natural beauty is a big benefit for the project, because the structure in many cases becomes the final interior finish. People want to spend time in those types of spaces as opposed to maybe a concrete or steel project lined with sheetrock.”

“The exterior cladding is not wood, but you would see the mass timber from outside,” says Carpenter. “It would be very sensitive aesthetically to the heavily wooded site it’s on. The buildings there now are wood-clad buildings. Multiple buildings on this site could be mirrored, flipped and turned with a mass timber structure in tandem with a modular MEP solution and a modular approach to the facade.

“You can build an architectural language on a site like this without having a homogenous look, where it looks like every building is the exact same,” he adds.

General contractors and subcontractors should be experienced in working with mass timber to avoid delays and field corrections, notes Carpenter.

Ho says the limitations of mass timber actually emanate from its benefits of being a light product. “The longer the span, the more it would be affected,” he adds. “We’ve seen some issues with significant acoustic or vibration control, where if you’re adding so much concrete in there to dampen vibration that it might not make sense to use timber.”

Mass timber manufacturers produce wood panels and beams to a high level of precision according to the architect’s specifications. (Kyle Jeffers)

Some mass timber projects can face challenges in jurisdictions where the code hasn’t been updated, similar to how it has been in California and other states. “Some jurisdictions may say they’re still under a general Type IV heavy-timber code, but can work with you and review engineering judgments,” adds Ho. “There’s a high level of risk on getting your permit in time or getting a permit at all compared to it being a slam dunk with a steel or concrete project for the same design.”

Ho says he and his colleagues advocate mass timber in projects “only if it makes sense. Right now, we see mass timber making sense in a lot of commercial instances.”