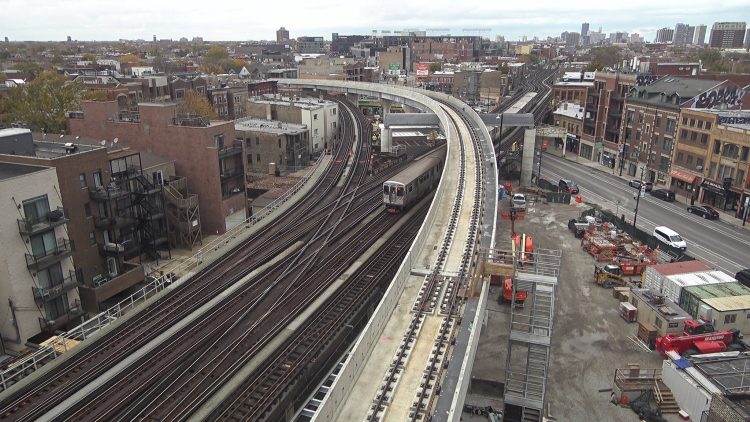 Eliminating bottleneck at junction where up to 150,000 riders travel daily is a centerpiece of the program

Stantec, a global leader in sustainable design and engineering, celebrates the opening of the Red-Purple Bypass, a pivotal milestone in the largest capital project in the Chicago Transit Authority’s (CTA) history. This morning, the first train traveled on the new bypass, officially removing a bottleneck north of Belmont Station, where as many as 150,000 riders travel daily at the intersection of the Red, Purple, and Brown Lines. Relieving pressure at this pinch point will have a positive effect on the entire transit system, sections of which are more than a century old. Stantec is the lead designer on the full Red and Purple Modernization Program, working within design-build team Walsh-Fluor.

The bypass consists of a concrete ‘flyover’ structure—a custom overpass that will allow eight additional trains through during rush periods and increase train speeds through the intersection by 60 percent. The intersection will now accommodate up to 7,200 additional passengers per hour during rush hour and save customers a half-million travel hours each year.

“This is a major milestone for one of the most complex transit projects in the United States,” said Toby Hansson, Lead Designer with Stantec. “The hard work from our construction and design partners has gotten us here, and one step closer to making CTA’s vision a reality for a revitalized transit network.”

The south end of the flyover structure was constructed on site and slid into place using self-propelled modular transporters (SPMT), minimizing the length of track outages. The structure is supported by an 84-foot, 120-ton straddle beam—the ‘backbone’ of the flyover—which was installed earlier this year. The bypass has notable aesthetic updates from the existing tracks and includes noise wall characteristics that will dampen track sound to the neighboring community. Extensive noise and vibration studies and community engagement informed the design.

In addition to eliminating a significant bottleneck in the transit network and allowing for better train movement during construction, the bypass will enable the next phases of track construction, which will allow for increased trains speeds once the antiquated, century-old Red and Purple Line tracks located underneath the bypass are replaced. In total, 1.9 miles of elevated tracks including bridges and support structures will be reconstructed, modernized, and replaced. Upcoming major RPM project milestones also include the completion and opening of ADA-compliant reconstructed stations at Lawrence, Argyle, Berwyn, and Bryn Mawr.

The design-build team broke ground in Fall 2019, with project completion scheduled in 2025.

With more than 22,000 employees, Stantec is ranked as a top ten global design firm by Engineering News Record, with top ten rankings in both transportation and mass transit/rail. Learn more about Transit at Stantec.

Communities are fundamental. Whether around the corner or across the globe, they provide a foundation, a sense of place and of belonging. That’s why at Stantec, we always design with community in mind.