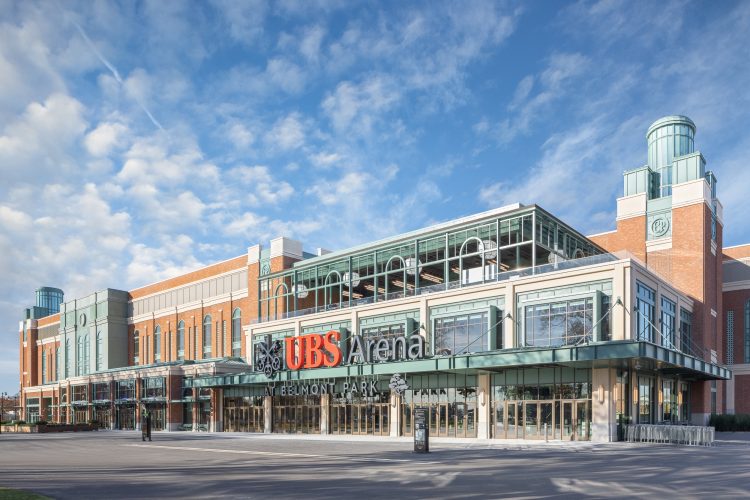 ELMONT, N.Y.  – Populous-designed UBS Arena, a 745,000-square-foot, 17,250-seat hockey and entertainment arena in Elmont, N.Y., and the new home of the NHL’s New York Islanders, opened on November 20. Built for hockey and made for music, the arena is set to be one of the most operationally efficient venues in the world.

“UBS Arena represents the future of the event venue industry and will be one of the top arenas for hockey and entertainment in the country,” said Jason Carmello, Populous principal. “Populous worked thoughtfully with Oak View Group, the New York Islanders and the entire design team to deliver a first-class arena that is built for hockey, but will set a new standard as a must-play destination for all forms of touring entertainment.”

As architect of record, global design firm Populous worked with the New York Arena Partners (the ownership group made up of Oak View Group (OVG), Sterling Project Development and the New York Islanders) to establish the arena’s design vision, directed at the creation of a hockey-specific arena while also being a premier music and entertainment venue. Populous developed the arena’s overall layout, seating bowl, location of the suites and clubs, event level spaces, as well as documenting and overseeing design of all interior spaces, some in collaboration with Jump Studios (a Populous company) and Good,Rich. Populous was also instrumental in creating one of the largest enclosed marshalling yards in the industry. The building’s exterior was designed by JRDV Urban Architecture.

“With UBS Arena, we partnered with Populous to build an arena that is made for music and built for hockey,” said Tim Leiweke, CEO of Oak View Group. “A massive advantage in designing UBS with Populous was the ability to design from scratch as we weren’t constrained by any existing infrastructure. We were gifted an amazing opportunity to take the plans and build it the right way, from the load-in and load-out of the truck dock, to artists’ dressing rooms. I am very confident that UBS Arena will quickly become the venue that all future arenas will be measured against.” 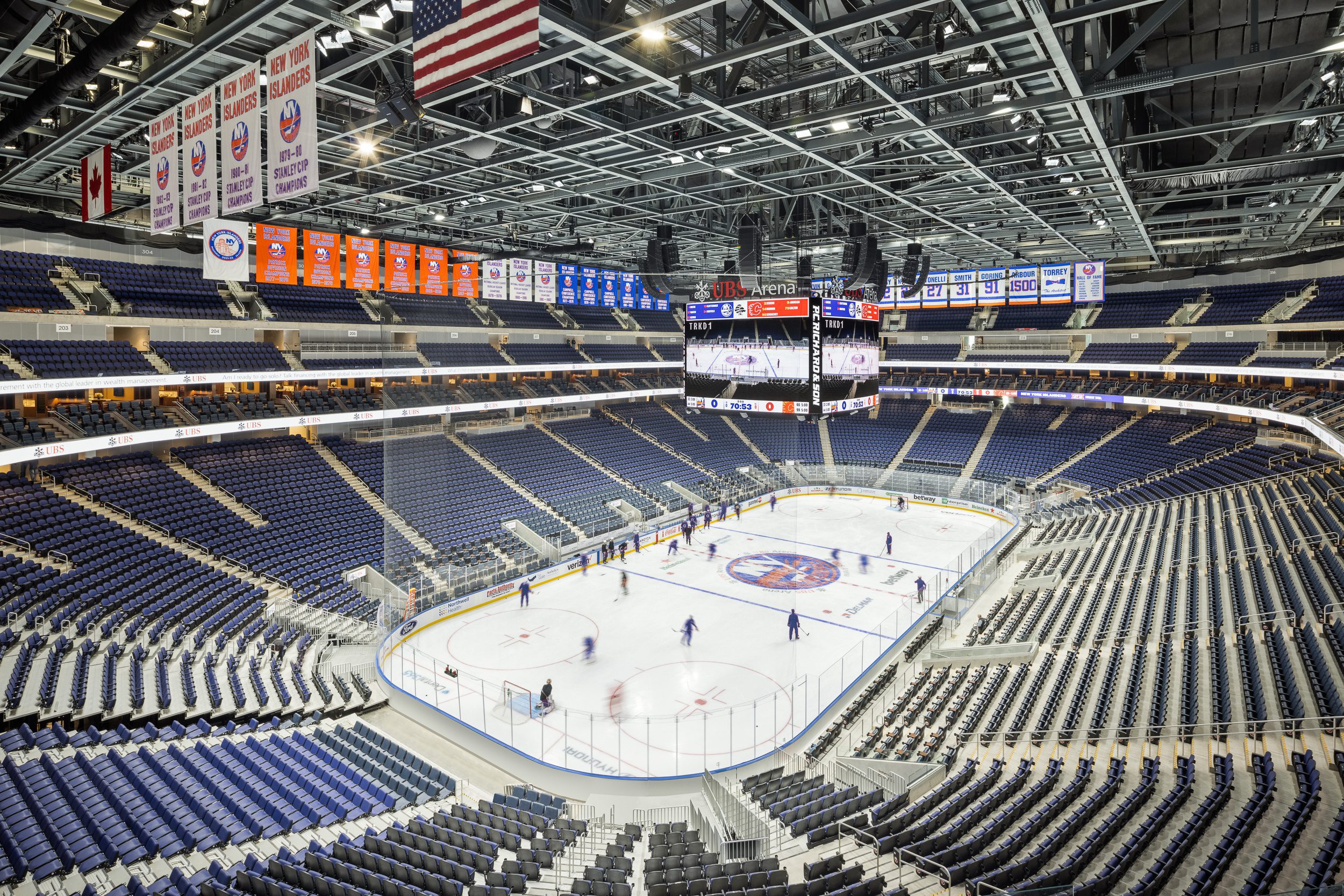 Built for Hockey, Made for Music

UBS Arena treats fans to some of the best sightlines in professional hockey, true to the OVG and Islanders vision to create a space meant for hockey, not adapted to it, as the Islanders’ previous homes were. Populous created hockey-specific sightlines for Islanders fans by strategically designing the seating bowl to be pushed in toward the ice further than a standard basketball-first arena, producing an intimate experience that makes spectators feel as though they are right on top of the ice.

A true standout feature of UBS Arena is its superior acoustics. Populous worked with acoustical design consultant Wrightson, Johnson, Haddon & Williams (WJHW) to implement several architectural elements that limit reverberation time and echoes. These elements include the use of absorptive materials on vertical surfaces to soak up the sound. Additionally, unlike the hard plastic seating common in stadiums and ballparks, UBS Arena features upholstered seating, which is more comfortable for fans and guests, but also helps the arena sound as it would at full capacity, even during sound checks and reduced-capacity events.

Sound absorbing baffles (sound barriers) are suspended horizontally below the structural roof deck, helping to improve their low frequency (bass) performance. Additionally, a specialized baffle and ceiling configuration called a “bass trap” has been created in the ceiling bowl within the depth of the roof structure to produce exceptionally low frequency sound and absorption. This is formed with the press box ceiling and vertical baffles to create a large sound-absorbing void in the upper corner of the arena where the seating and roof meet.

While designed with hockey in mind, UBS Arena serves to make the concertgoer feel just as special as the hockey fan. To achieve this vision, all the finishes in the arena are upscaled. The concourses feature artisan white subway tile to brighten the space, wood paneling along with up-lighting that circles the concourse and high-end light fixtures radiating theatrical lighting to promote a premium entertainment experience. Large LED screens and TVs placed throughout the arena ensure that fans are never far from the game or concert.

Populous’ Brand Activation group developed and worked with ownership on the overall site and building navigational strategy, and designed and developed the storytelling for UBS Arena. The team also completed the building wayfinding package and oversaw the fabrication and install. Additionally, Populous carried out all branding for arena-wide concessions, clubs and suites, working with the arena’s sales and marketing team and stakeholders to integrate various partnerships. The site and wayfinding signage, a design element Populous created from scratch, takes inspiration from the heritage and placemaking of historic Belmont Park, mixed with New York City’s Central Park theme.

There are several dedicated areas for fans, specifically the famed “Section 329” Islanders supporters section with 180 safe standing capabilities. The new safe standing space is dedicated to the Blue and Orange Army fan club that previously occupied Section 329 of Nassau Coliseum. Though it is on the 200 level of UBS Arena, its location and sightlines are situated so fans have almost the same placement as the original Section 329.

Populous’ design includes 10 bars that open directly into the bowl, so fans never have to miss the action. Situated at the top of the arena’s main staircase, the Heineken Red Star Bar is the first space a visitor sees upon arrival and provides a wide view into the bowl. Additionally, the Tailgate Bar on the north upper concourse, featuring a 100-foot-long bar, is connected to Section 329 and serves as another notable fan amenity and attraction.

The main concourse level contains the Hyundai Club, a space decked out in Islanders swag while tastefully tying in Hyundai’s brand identity. The club features multiple rows of standing drink rails inside the bowl, which, when combined with the Blue and Orange Army above, creates a dynamic, Islanders-centric fan zone and experience within the bowl itself.

At ground level, Populous employed its design-led design build service offering for Belmont Hall featuring The Harrison restaurant, working with Shawmut Design + Construction and leading the project from concept to fruition. The team worked with a New York City local sign painter, a Kansas City-based textile designer, an Ireland-based found-object curator and a New York restauranteur to create an Islanders-focused dining space with authentic art and interior features, while also showcasing some of The Harrison’s most popular menu items.

The arena also houses 38 suites above the main concourse level, with the main concourse club below those suites. Other fan amenities include a 900-square-foot speakeasy situated off the main concourse. In addition, UBS Arena breaks from traditional belly-up concessions with market-based offerings throughout the concourses, including two Amazon Just-Walk-Out Stations for general patrons.

A “Star Compound” and Other Dynamic Interior Spaces

Populous worked on the design of various interior spaces on the event level at UBS Arena, including the “star compound” for visiting artists, campuses for the home and visiting teams, a green room, artist lounge and family lounge. These efforts led to the development of design concepts specific to each area, sourcing materials, fixtures, finishes and furniture, creating the layout and implementing interior design and branding.

While the arena was designed primarily as a hockey arena, several elements allow flexibility for concerts and other entertainment. The “star compound” is designed around artists and includes four dressing areas that wrap around a star lounge. The compound is outfitted in wood and tile flooring, custom area rugs and stone slab backsplashes at the induction buffets. Walls are clad in rich wallcoverings and the spaces also feature upgraded decorative lighting and artwork.

Typically treated as behind-the-scenes, artist rooms often feature back-of-house finishes. UBS Arena stands out in this regard, as each star suite was designed as a luxurious hospitality lounge with top finishes and spa-inspired showers and bathrooms. The suites also feature large, illuminated makeup mirrors, counters with concealed pop-up outlets, custom full-length mirrors and long walls to accommodate wardrobe hang racks. In addition to the primary kitchen commissary at event level, there is a dedicated crew kitchen and dining room provided within the star compound.

Populous imagined these interior spaces to be multifunctional for use by all the types of entertainment that come through the arena. The team provided a custom walnut veneer operable partition and separate lavatories between the artist lounge and Islanders family lounge, allowing the spaces to be used together or separately. These areas and other event-level spaces, with their higher-than-normal finish level, allows each space the opportunity to be used by an artist or as a premium amenity, depending on the event.

Moreover, UBS Arena contains a 23,000-square-foot NHL locker room and player campus, which houses a cardio mezzanine level and shoot room for player training. The home team campus features locker rooms for the players and coaches, a weight room, equipment areas, treatment rooms (medical, x-ray, cryotherapy, hydrotherapy, massage, sauna and steam rooms), offices and video rooms. The campus also includes a full kitchen, which opens to the players’ lounge. Populous and its design partners imagined the Islanders’ locker room to be a direct reflection of the locker room in the team’s training facility, using the same finishes and elements. In the home team areas, materials were incorporated that appear high-end, but are also durable and easy to maintain. A natural slate black wall is the feature of the players’ lounge. Linear faux walnut slat ceilings bring a warmth to the hydrotherapy, training and players’ lounge, as well as the video room. The arena also contains an NHL visitor locker room, making five total locker rooms available (including three auxiliary locker rooms) on event level at UBS Arena, as well as 3,000 square feet of office space for Islanders staff.

Designed with Operational Efficiency in Mind for Staff and Talent

At 60,000 square feet, UBS Arena has one of the largest marshalling yards in the industry, a major draw for performers and their teams. Covered, enclosed and heated, the below-grade marshalling yard provides ample power and data connections for more than 10 trailers, as well as seven loading docks offering direct ramp access to the arena floor. A 400,000-pound rigging grid can support 300,000 pounds of equipment for an end stage or center stage setup. These elements fulfill the vision to make UBS Arena one of the most accessible load-in/load-out sequences in the marketplace, allowing ease of access to event-level areas.

An industry first, the interior mezzanine catwalk above the event-level premium spaces is an innovative solution for day-to-day operations as it offers direct access to all utilities that serve the premium spaces from above, including Wi-Fi, gas and electric. This prevents temporary closures of premium spaces, or damage to ceilings, walls and other infrastructure, during possible repairs. There is also direct freight elevator access from the arena floor to the catwalk for continued ease of event operations.

In addition to UBS Arena, Populous recently completed the design of Climate Pledge Arena in Seattle with OVG.

Populous is a global architectural design firm that creates the spaces where people love to be together, like the Olympics, World Cups and Super Bowls. Our more than 3,000 projects live at the intersection of sports, entertainment, arts and culture to amplify emotional connection and belonging. Since 1983, the firm has been connecting people and place through services such as architecture, interior design, event planning, brand activation, wayfinding, urban planning, aviation design and sustainable design consulting. Populous has offices on four continents and regional centers in Kansas City, London and Brisbane. Learn more at www.populous.com