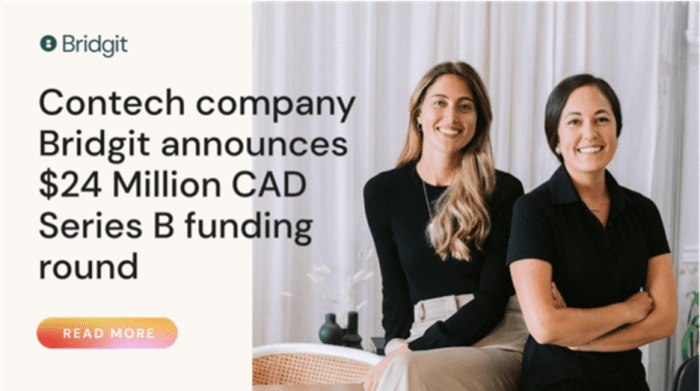 The leader in construction workforce intelligence has doubled in size since its Series A funding round, and announced the hiring of two new executives.

“When we went on the hunt to solve the industry’s next challenge, my co-founder and I spoke with hundreds of contractors and construction executives to understand how technology could make them more successful. Clear themes emerged, including more strategic workforce planning, the need to forecast future staffing demands, and collaborative access to people and project data,” said Mallorie Brodie, CEO and Co-Founder at Bridgit. “In just over two years since launching, we’ve experienced a staggering rate of adoption by North America’s biggest general contractors like Skanska, Balfour Beatty, and Ryan Companies, among others. This Series B funding round will fuel rapid product development and aggressive hiring, so we can continue to bring innovative solutions to the forefront of the construction industry.”

This latest funding round was co-led by Camber Creek and Storm Ventures. Additional investors include Nine Four Ventures, along with existing investors BDC Capital’s Women in Technology Venture Fund, StandUp Ventures, Sands Capital, and Vanedge Capital — all of which were attracted by Bridgit’s fast growth and innovative product offerings. The company’s flagship solution, Bridgit Bench, is a digital, cloud-based platform that helps general contractors plan and grow their workforce, leverage project data to improve bidding and staffing decisions, and forecast project pipelines to increase productivity and profitability. Bridgit Bench has been a catalyst in attracting new talent, customers, and investors. It has helped the company double in size and increased revenue by 140% since its last funding round.

“Construction technology drives massive improvements in the safety, productivity, and bottom line for general contractors. It’s no wonder half of venture funding over the past 3 years has gone to ConTech,” said Arun Penmetsa, Partner at Storm Ventures. “By transforming workforce data into actionable insights, Bridgit’s customers leverage their most important tool in their tool belts — their people — to reduce risk and maximize profit.”

After launching its workforce intelligence solution in 2019, Bridgit has scaled significantly. Since its last funding round, Bridgit has hired 39 new employees for a total of 83, and is currently hiring for sixteen more positions. It has also onboarded 58 new customers, which include Clayco, The Walsh Group, and Hoffman Construction, with enterprise-wide agreements signed with Skanska, Ryan Companies, and Alberici-Flintco. The company is now partnered with over 16% of the Engineering News-Record’s Top 400 Contractors — the largest contractors in the U.S. based on revenue.

“As a leading general contractor in Texas, our goal is to consistently deliver high-quality buildings in a variety of market sectors, while exceeding the most demanding expectations,” said Johnathon Grammer, Director of Operational Excellence at Rogers-O’Brien Construction. “Bridgit gives us the ability to put the right people on the right jobs at the right time. This gives us a distinct competitive edge by allowing us to put our best teams forward, while pursuing and winning bids on projects where we are positioned to be most successful.”

Additionally, Bridgit has released 33 new features and announced 16 integrations (with companies such as Procore and Autodesk), with plans for many more in the future. With a fresh infusion of capital, executive talent, and seasoned board members, Bridgit is seizing the momentum and preparing to further disrupt the industry in the years ahead.