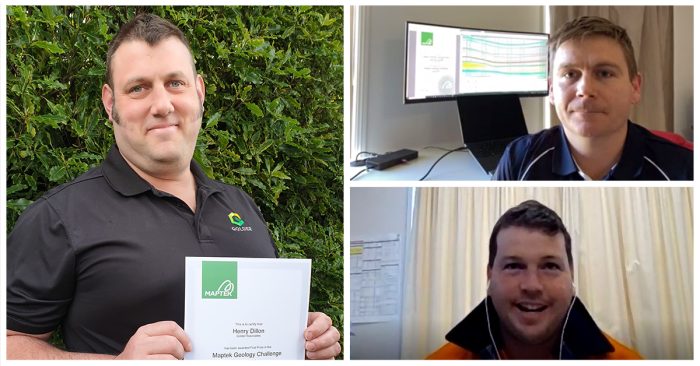 ‘Our key problem was how to use all the data in the boreholes to model all the geologies and still get the low and high density sands in the right places throughout those drillholes,’ Dillon said.

‘The answer was to assign and use numeric values and combine the data with soil behaviour types and shear wave velocities to control the geological model.’

Dillon applied Maptek Vulcan, Vulcan GeologyCore, Data Analyser and DomainMCF for the challenge, which had to be completed over one week earlier this year.

Speed is a known benefit of DomainMCF and proved to be the case for the Christchurch study.

‘We were able to construct a reasonable lithological model from drillhole and cone penetrometer test data for an area of known geological complexity. We sent 193,000 data points to DomainMCF and received our model after 13 minutes and 6 seconds!’ Dillon commented.

As well as displaying an innovative approach to geotechnical assessment of performance and design for the foundation of a future structure, Dillon provided invaluable feedback for improving the integrated modelling solution for all users.

‘DomainMCF has targeted the mining industry, but many other industries find traditional modelling processes to be equally time consuming – we can spread the benefit,’ Dillon said.

The challenge was launched as part of Maptek Connect, a 24‑hour online conference delivered in May. Maptek provided access to various software tools that participants could apply to a geology-related application of their choice, with an emphasis on innovation.

Dillon’s reward was a cash prize and DomainMCF hours for Golder, which he plans to assign to development projects that would benefit from the simple workflow approach that quickly produces an accurate geological model from a dataset.

‘I’ve already got a colleague in Canada who is interested in seeing what we can do with their oil sands project in terms of interpretation, so the opportunity to use funds for an innovative use inside a consultancy is priceless,’ Dillon concluded.

Second place in the competition was awarded to a team from Anglo American led by Reece Stewart for their innovative approach to overburden definition modelling, with third place going to Matt Green, Evolution Mining, who compared implicit modelling to DomainMCF for interpreting complicated geological structures.

Richard Jackson, Maptek Geology Team Lead and organiser of the global challenge said he was thrilled with the effort from all participants.

‘The winning entries were strong examples of well-defined problems that were difficult to solve with traditional methods, highlighting the benefit of using machine learning to act on multiple data types to create a geological model,’ Jackson said.

‘Submissions displayed a range of novel techniques and applications that will contribute to innovation in our industry,’ he concluded.

Maptek anticipates running another challenge in 2022 and looks forward to ongoing industry collaboration to simplify modelling processes and inspire geologists to find additional applications for the machine learning technology.

Watch the interview with the winners here

Maptek™ believes that to make mining more efficient, miners should be enabled to make better decisions. That’s why all our effort is focused on providing integrated decision-making support solutions. This integration is particularly important as it enables us to turn data into knowledge at every stage of the mining life cycle. Ultimately by fully integrating that knowledge Maptek wants to change the way mining is done forever. And we’ll achieve it by living our principles every day.