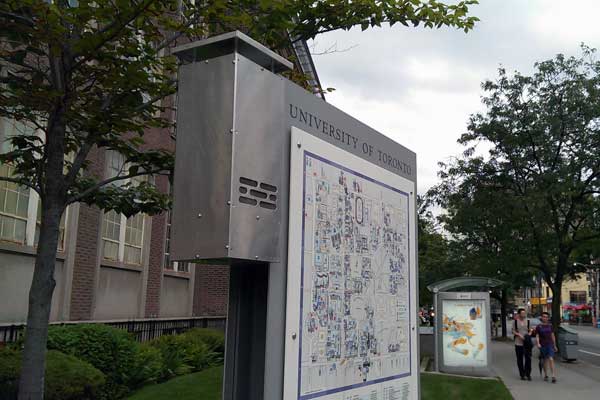 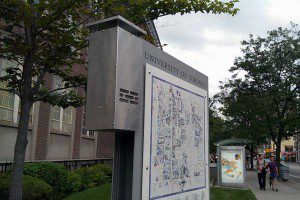 Epidemiologists’ understanding of the relationship between exposure to airborne pollutants and a range of health conditions, such as cardiovascular disease and asthma, has grown increasingly precise in recent years.

What’s less well known is precisely where the air is most polluted.

Toronto, for example, has only four air-quality measurement stations providing real-time data, even though research shows that the concentration of pollutants such as nitric oxides, volatile organic compounds and carbon monoxide can vary by orders of magnitude within an area spanning just a few city blocks.

To more precisely gauge pollution levels, Natalia Mykhaylova, a PhD candidate in chemical engineering, is developing an inexpensive air-quality monitor that could be deployed on utility poles across a city. The shoebox-sized device, which is packed with sensors and detectors that can measure the concentration of fine particles and the pollutants mentioned above, will eventually be powered by lithium batteries and small solar panels.

The total price of the components can be kept to less than $300, Mykhaylova says, and the monitor can be adapted for indoor sites.

Mykhaylova, who works in the Southern Ontario Centre for Atmospheric Aerosol Research in U of T’s Faculty of Applied Science and Engineering, says her vision is to one day connect the monitors wirelessly to a data network so the measurements can be fed into a central database in real time. Such a network would allow users to go to a website to check pollution levels in specific neighbourhoods with an eye to adjusting their travel patterns or pressuring public officials to deal with local pollution sources.

For now, Mykhaylova and her team have placed a dozen of their homemade pollution-monitoring stations in backyards near highways around the city and are trying to determine the traffic’s impact on nearby air quality.

Mykhaylova lives near the Gardiner Expressway and a large industrial facility, so she is keenly aware of the potential health consequences of living close to highways – something a growing number of Toronto condo dwellers now experience.

The ultimate goal is to encourage local governments to deploy commercial versions of these low-cost devices in large numbers around urban areas as a way of generating a much more nuanced and up-to-the-minute picture of the invisible geography of pollution.

“The government needs to have this data out there for people to know what the levels are,” says Mykhaylova.