/ Energy / Netherlands on track to phase out coal power by 2030, says GlobalData

Netherlands on track to phase out coal power by 2030, says GlobalData 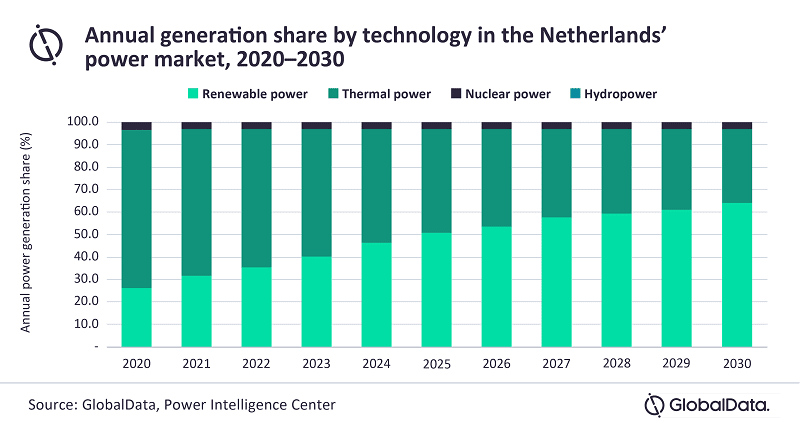 The Netherlands is on track to phase out the use of coal for power generation by 2030, according to GlobalData, which notes that the country’s coal power capacity is expected to decline from 3.31 GW in 2020 to 3.18 GW in 2025, before being phased out altogether in 2030. The leading data and analytics company highlights that the implementation of the Dutch Government’s minimum carbon price floor, introduced in 2020 but delayed due to COVID-19, will only help efforts towards lowering greenhouse gas emissions.

Rohit Ravetkar, Power Analyst at GlobalData, says: “The Dutch Government’s ban on coal power generation follows its efforts to reduce greenhouse emissions by 49% by the end of 2030, as compared to 1990 levels. The minimum carbon price floor announced by the government will discourage the use of fossil fuels for power generation. By heavily penalizing the greenhouse gas emitters, the carbon price floor will result in increased adoption of renewables. The carbon price floor was introduced in the UK in 2013 and resulted in significant growth for the renewable sector. A similar result is expected in the Netherlands.”

According to GlobalData’s latest report, ‘Netherlands Power Market Outlook to 2030, Update 2021 – Market Trends, Regulations, and Competitive Landscape’, the Netherlands’ thermal power generation is expected to sharply decline to 32.9% in 2030, from a share of 70.4% in annual generation in 2020.

Ravetkar continues: “One requirement of the government’s ban is that coal-based power plants have to switch to alternate fuels such as sustainable biopower. Coal power plant owners are expected to spend a significant amount to retrofit their plants for switching to biopower. This will result in biopower capacity increasing from 1.21 GW in 2020 to 3.11 GW in 2030.”

The government’s plan to phase out coal power has been challenged by several major utilities. For instance, RWE and Uniper have invoked the Energy Charter Treaty to sue the Netherlands for more than $2bn as compensation.

Ravetkar adds: “In the last decade, the Dutch Government has encouraged power utilities to build coal power plants in the country. A few of the coal-fired plants were commissioned in 2015 with utilities spending more than $3bn for the construction of these plants. Now, utilities are unhappy with the compensation offered by the Dutch Government for closing down their coal power plants as it will massively affect their profits.”

The government also plans to phase out nuclear power by 2033. As of August 2021, the country had only one operational nuclear power reactor having a capacity of 482 MW, which is owned and operated by Pzem Energy BV and RWE AG. This reactor is expected to be decommissioned in 2033.