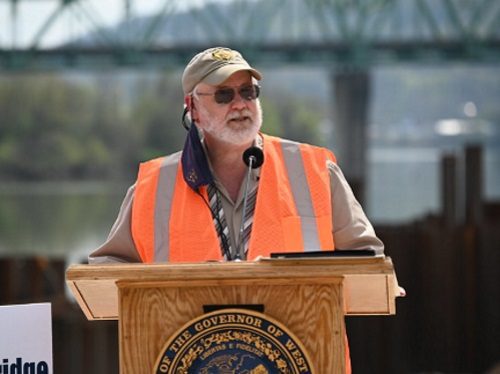 As reported by the AASHTO Journal: https://aashtojournal.org on October 11, 2021 - in News, People

[Above photo by the West Virginia Governor’s Office]

Wriston – who has served as WVDOT’s deputy secretary of the WVDOT and WVDOH’s deputy commissioner since 2019 – replaces Byrd White III, who retired in September, in both leadership positions.

“Jimmy has been a driving force behind our efforts to transform the DOT into an agency that prioritizes road maintenance and always goes above and beyond to get the job done,” Gov. Justice said in a statement.

“Since he was named deputy secretary, our Department of Transportation has completed more maintenance work than at any time on record,” he said. “He embodies the can-do attitude of our rejuvenated DOT, and I have all the confidence in the world that he will do an excellent job in this incredibly important role as our transportation secretary.”

​​Wriston steps into this leadership role with 25 years of experience at WVDOT under his belt. He began his career at the agency in September 1996, working for the bridge department for District 9 in Lewisburg before moving to the engineering division in 2004 as a project manager before becoming a regional engineer in 2005.

For the next 12 years, Wriston served as the WVDOT’s chief transportation engineer and special program manager before his deputy secretary and commissioner promotions in 2019.