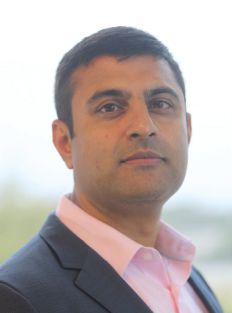 Balaji Sreenivasan is the founder, CEO and member of the board at Aurigo Software Technologies.

Sreenivasan: I am the founder, chief executive officer and board member at Aurigo Software Technologies. I have played a critical role in shaping Aurigo to be a modern enterprise cloud software business that is helping infrastructure owners plan and build over $300 billion of capital projects more efficiently. I spend my time on product strategy, working with our customers and enabling the remarkable set of people at Aurigo to be their best. I’m an alumnus of the National Institute of Technology (NIT), Trichy, and the University of Florida, Gainesville.

V1 Media: How does Aurigo Software fit within the infrastructure industry?

Sreenivasan: Founded in 2003, Aurigo builds modern cloud software to help infrastructure and facility owners plan with confidence, build with quality and operate with efficiency. Aurigo’s products include Aurigo Masterworks and Aurigo Essentials, delivering efficiency improvements of over 37 percent and savings of up to 5 percent of the total capital spend.

Aurigo’s software products help owners prioritize their capital investments and streamline the entire construction lifecycle to deliver sustainable infrastructure. In the last decade, Aurigo has become the software platform of choice by state departments of transportation, airports, transit, water and public agencies who want to build their infrastructure better, smarter and faster. We have helped plan and deliver over 40,000 projects across North America. Our customers include eight U.S. DOTs; the Ministry of Transportation, Ontario; and several large agencies, including cities of Seattle, Houston, and Las Vegas, and the Dallas Area Rapid Transit, to name a few.

V1 Media: Why is digitalizing capital management for infrastructure so important, and what should that look like in practice?

Sreenivasan: You can’t build tomorrow’s infrastructure with yesterday’s technology. Infrastructure owners have relied on grossly inefficient and antiquated systems and methods, and can’t support the complexity of today’s capital programs. America is on an ambitious journey to plan and build over $1 trillion worth of infrastructure over the next decade. The once-in-a-lifetime investment will address the aging infrastructure issues that are straddling America and will help us build sustainable communities for our future generations.

V1 Media: A federal infrastructure bill has been progressing along. How do you feel about it and the process, and do you think it will come to fruition?

While funding has long been the primary obstacle to modernization, the country also needs to improve in a digital platform to plan and deliver these infrastructure assets efficiently. With increased funding, it’s more important than ever to modernize how we design, build and manage infrastructure so each dollar we invest goes further.

V1 Media: If the infrastructure bill under development becomes law, how will it affect the country? Please provide some specific examples.

Sreenivasan: The Bipartisan Infrastructure bill, if and when passed into law, is landmark legislation and is America’s down payment to secure the future generations of Americans. While America needs over $5 trillion in investments to modernize its aging infrastructure, the bipartisan bill is the first step. This bill will put $110 billion into roads and bridges, $66 billion into passenger and freight rail, $65 billion into broadband, $55 billion into water systems, and $39 billion into public transit, as crucial highlights.

More than 35,000 people die in traffic crashes on U.S. roads each year, and millions more are seriously and often permanently injured. Over 50 percent of these deaths are due to poor infrastructure design and traffic congestion. We have had horrific incidents in the last few decades that should be a thing of the past. Some prominent examples are the bridge collapses in Minneapolis (2007) and South Florida (2018), the public health crisis owing to lead build-up in water pipes in Flint, Mich. (2018), and the winter power outage earlier this year in Texas owing to a failed power grid.

When it comes to broadband, 1 in 5 Americans in rural areas lacks access to broadband internet. Internet is the new electricity. Internet access is fundamental to tens of millions of Americans who need this to participate in our economy, attend school and stay connected in the 21st century. When it comes to rail connectivity, along our nation’s busiest passenger rail corridor, the Northeast Corridor, infrastructure-related issues have caused 328,000 train-delay minutes, and we have a disaster waiting to happen with over $45 billion of repair backlog.

These are some of the grim reminders that America needs to invest in its infrastructure to be the first-world country that we would like it to be.

V1 Media: What should our engineering audience be thinking about in their work in terms of funding projects and making that process more digital?

Sreenivasan: It’s a common engineering industry misconception that digital tools for construction are limited to 2D/3D design, BIM and GIS. A mindset shift needs to take place so engineers think about technology adoption across the entire construction lifecycle from capital planning, bidding and estimation, construction management, and asset maintenance, and not just design. We live in the 21st century, and to build America’s infrastructure, we need to do it differently and better this time around.

Getting the infrastructure bill approved is the first step, but the execution is equally important. Investment managers, public-works directors and construction managers will have to employ the only tools capable of managing the complexity of today and tomorrow’s capital programs for America to build back better. Engineers should look to adopt enterprise-level modern cloud software to make smarter decisions on which projects to fund; build more-accurate estimates using historical data; leverage AI/ML to analyze public feedback; and use cloud-based workflows to hasten regulatory compliance, tighten project controls and reduce rework.

Getting any of these factors wrong when executing on a $1.2 trillion infrastructure spend will be a mistake that we can’t simply undo. According to McKinsey, the average capital construction project is 20 months behind schedule and 80 percent over budget. And this is not merely an issue for government leaders or capital management professionals. Taxpayers must understand where their money goes and how it affects their everyday lives—like their commutes or the safety of the buildings they occupy.

I have said this before and will say this again: We can’t build 21st-century infrastructure using yesterday’s technology. America’s infrastructure owners and engineers must digitize capital management to help America build smarter, build faster and build stronger.