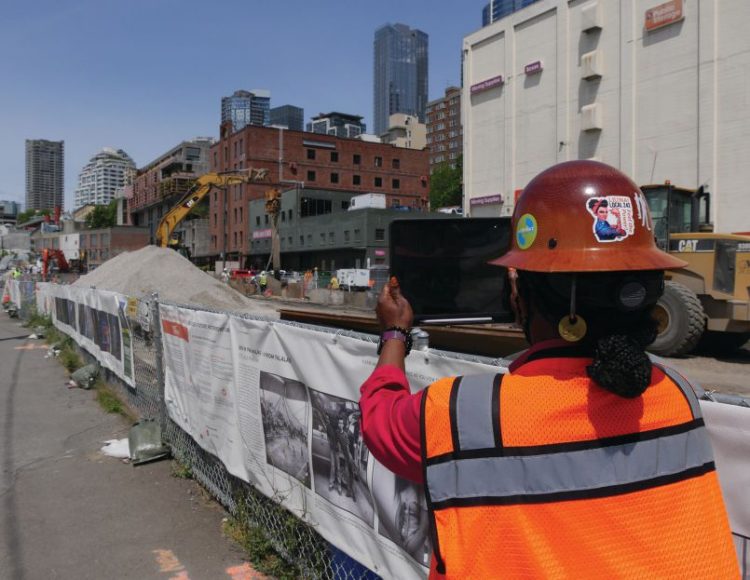 A project inspector on a Seattle jobsite uses mobile technology as part of the inspection process. The technology is accessible on mobile tablets (below), making it easy for onsite workers to capture images and notes in real-time. Image Courtesy of HeadLight 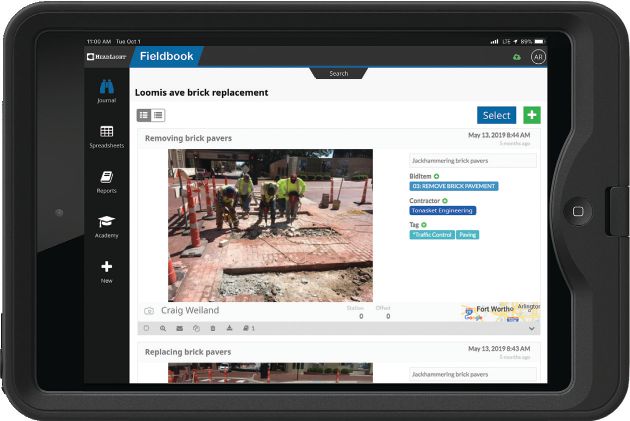 The nation is experiencing record-busting temperatures, worsening drought conditions in the West, and a fire season that has already burned more than 2.4 million acres—equivalent to an area larger than the state of Delaware. And the National Fire Center says the 2021 fire season may extend into October. The Dixie Fire, the second-largest in California’s history, burned through the town of Greenville in a 24-hour period in early August 2021, forcing mass evacuations and eventually destroying more than 500 structures.

As construction in the wildland-urban interface (WUI), where development spreads into forestland and other natural areas, has increased during the last two decades, more communities have developed in areas at risk of catastrophic wildfire. One in three homes across the country now is built in the WUI, putting the transportation infrastructure connecting WUI residents to goods and services—as well as emergency services—at risk.

Countless people across the country are being subjected to unhealthy levels of smoke and significant property destruction caused by wildfires, and many are facing damage to public infrastructure caused by the fires or other related disasters such as landslides and mudslides.

And wildfires aren’t the only threat. Each year, natural disasters cause significant damage and disruption to the nation’s transportation infrastructure. In 2019 alone, the Federal Highway Administration allocated more than $705 million in emergency-relief funds to rebuild infrastructure damaged by natural disasters. Historic hurricane and wildfire seasons contributed to an even costlier year in 2020 when the damage costs across the nation doubled over the previous year, including Hurricane Laura in Louisiana and Texas that caused $13 billion worth of damage.

The devastation from these events lasts long after floodwaters have receded or the fires have been extinguished. Fallen trees and damaged roads mean many people can’t access their homes or businesses for days or months. For example, part of California Highway 1 along the central coast was closed for months to repair a section of the road that washed away during a storm.

The hefty financial burdens can extend beyond infrastructure challenges. In 2018, wildfires in California resulted in financial losses of nearly $150 billion, disrupting the state’s economic supply chain and creating impediments to transportation and labor that indirectly accounted for $88.6 billion of the total loss. Similarly, recent wildfires left hillsides along Interstate 70 in Colorado susceptible to erosion, contributing to mudslides that caused an extended closure of the major transportation artery that certainly will have an economic impact. 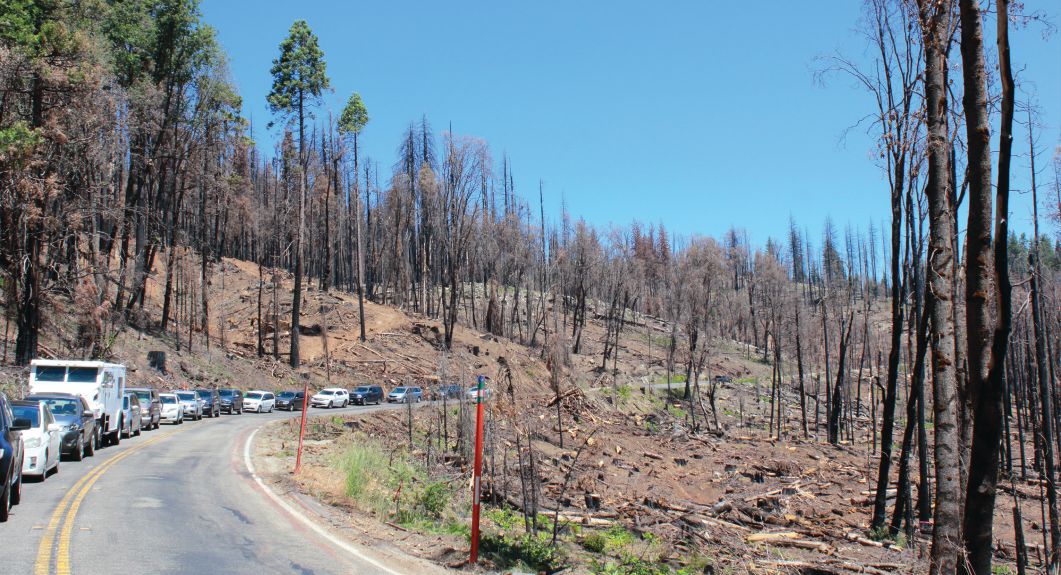 Faster reaction to road closures means shorter disruption to the movement of people and products.Image Courtesy of HeadLight

As these disasters have increased in frequency and severity through the years, so have the capabilities of technology and services to aid state and local governments’ ability to manage them. New tech-driven tools have already proved an essential asset during disaster response. During 2020’s record-breaking hurricane season, where five hurricanes devastated the Gulf Coast, innovative inspection technologies enabled the Louisiana Department of Transportation and Development repair teams and debris-removal crews to make safe and travelable infrastructure available for first responders in affected areas. The technology helped the state prioritize the needs of the region’s citizens, ensuring people got the assistance they needed as they grappled with the effects of the hurricanes.

As states across the nation face unique challenges and natural disasters, departments of transportation and other government agencies are in an ideal position to embrace technological innovation that will enable them to respond faster, act on real-time data, and become more adaptable in their response.

Most importantly, modern systems and technology will allow agencies to plan their response to future disasters more effectively. They’ll be in a better position to determine which areas of destruction to prioritize when disaster strikes, making it easier for transportation leaders to react quickly to mitigate loss. Faster reaction means impediments restricting movement of people and products can be lessened, and damage can be repaired more quickly and cost-effectively. Innovative technology in emergency response creates several notable benefits.

Being able to react immediately during a disaster or emergency creates the potential for greater impact. Because events such as tornadoes and wildfires are unpredictable, it’s essential to use time and resources as efficiently as possible to get a better handle on the situation. Having an understanding of where debris is blocking roads or where the fire has spread is essential for giving crews a chance to prioritize how and when they respond to each hazard. 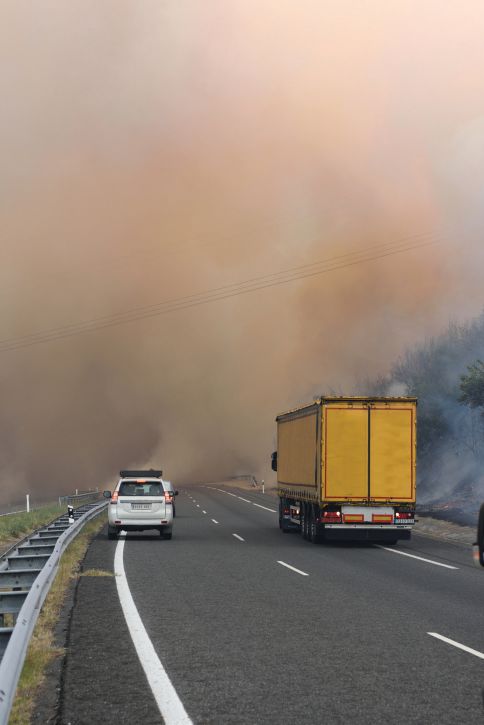 Even when traditional modes of communication are unavailable, cloud-based technology resources allow crews and teams to stay in touch and collaborate through a single channel or platform. For example, a collaborative technology that provides a way to take detailed photo observations of debris and other disaster ramifications from a safe distance can expedite repair of damaged infrastructure. GPS coordinates associated with images captured can provide a precise location to areas of concern.

Modern technologies help crews get a better grasp of the situation and empower them to act on real-time facts and data. Inspection technologies that capture quality observations with easily accessible embedded metadata enable agencies to assess damage and make plans based on reliable information.

Images of hurricane damage captured by DOT workers in Louisiana with HeadLight’s Fieldbook include robust metadata such as precise location, date and time stamp. Open data sources allow DOTs to aggregate and integrate information across platforms, increasing their speed and accuracy when applying for federal aid. Image Courtesy of HeadLight

Although it may be possible to predict the likelihood of a disaster, the resulting damage or complications from the event aren’t going to be the same each time. With the proper technology tools, departments of transportation and supporting agencies gain more flexibility to handle unpredictable situations. Technology that feeds data directly to spreadsheets can help agencies quickly grasp debris quantity and damage estimates. This information can be useful to establish priority routes for each fire zone, for example, expediting road clearing for first responders and the traveling public.

With wildfire and hurricane seasons lasting longer, state and local governments across the country have an opportunity to embrace technological innovation and transform the way they address increasingly common and severe weather events in an efficient and effective manner. Being able to continue to improve the response to natural disasters can be a crucial element of saving lives, protecting land and recovering faster from these devastating events.