Steel Roof Deck Shows Off Its Curves in Las Vegas 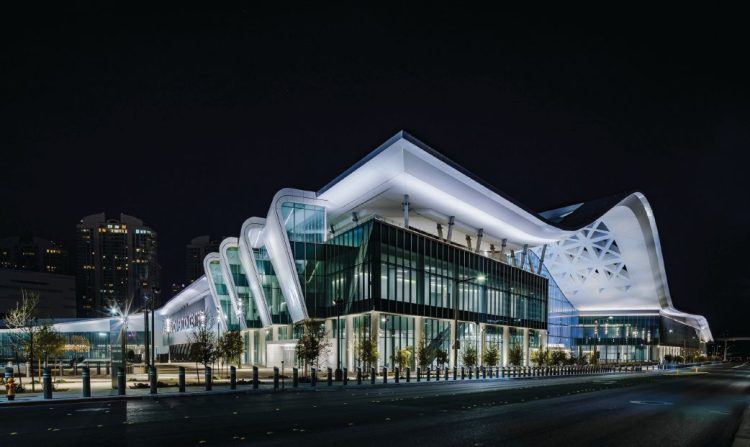 Imagine trying to design and build a structure that could stand out amid the glitzy, audacious Las Vegas skyline.

That was the task assigned to the team behind the $989 million Las Vegas Convention Center West Hall expansion. The result is a big, bold, visually exciting addition to the city’s architecture. The project’s hallmark feature is a majestically curving, sloping roof inspired by the nearby Spring Mountains.

With its expansive open spaces, West Hall roof erection over the interiors was a unique undertaking. Trent Fowler, specialty deck project manager at New Millennium, says installing the 704,000 square feet of dovetail roof deck over the exhibit hall was the most challenging part of the project.

The hall is shaped like a parallelogram, with short sides at the front and back of the facility with longer sides on either side of the hall. W&W Steel Erectors erected the structure’s steel truss frame in phases, initially creating a horseshoe-like shape around the perimeter and leaving the center of the hall open. After the partial frame was in place, Versa-Dek dovetail roof deck panels were installed to stabilize the structure, says Fowler. Then long-span trusses were erected across the opening of the horseshoe from front to back. At the same time, the dovetail roof deck was installed from front to back as trusses were completed. Spans between the trusses, according to Fowler, were “pretty typical” at 10 feet.

Delivery of materials, staging and sequencing were critical to the phased erection. Fowler says New Millennium shipped 165 truckloads of roof and floor deck between February 2019 to August 2019. It arrived when needed at a staging yard, keeping the project on schedule throughout the two-and-a-half-year timeline. According to Fowler, early collaboration on the sequencing and erection facilitated the smooth delivery, meeting W&W’s demands.

The atrium inside the main entrance sits to the west of the exhibit hall. This area includes the lobby and registration space. Viewed from above, the lobby is in the shape of a triangle, widest at the entrance and tapering off toward the exhibit hall on one side and the meeting rooms on the other side. The roof over the atrium represents the highest point of the curving ribbon. From this point, the roof follows a descending slope from front to back. The atrium and meeting rooms required 90,000 square feet of N deck roof deck. The N deck panels integrate with cantilevered plate girders that slope to the rear over the atrium.

“The N-deck product allowed for the span needs of the massive, cantilever snow-cone roof,” adds Jacobson. 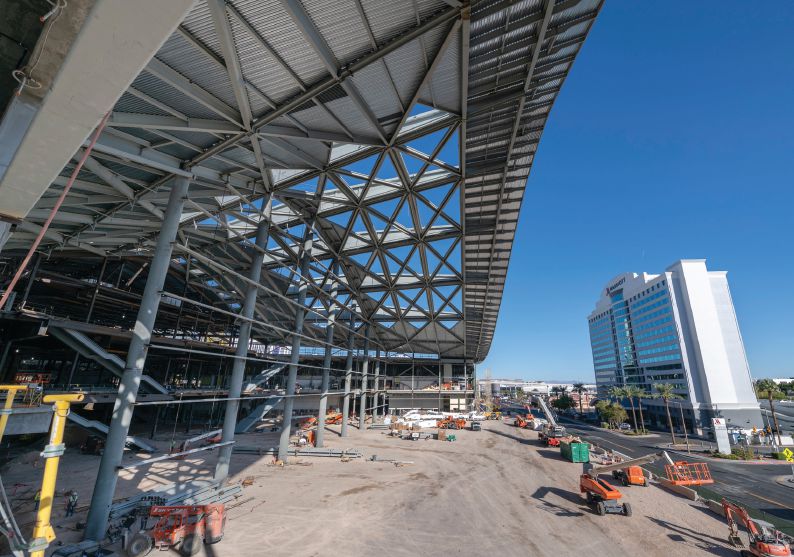 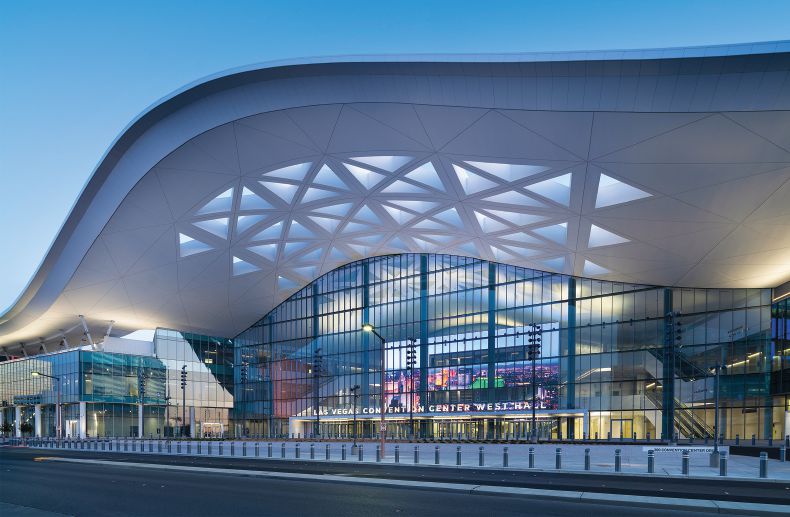 The undulating roof of the West Hall is inspired by the nearby Spring Mountains, with the “peak” over the main entrance about 120 feet high. It features type N steel roof deck covered in a membrane to achieve its look. Photo courtesy of Las Vegas Convention and Visitors Authority

Unifying the Las Vegas Convention Center’s West, North, Central and South halls, the undulating ribbon roof is the expansion’s signature design feature. In an interview with the American Society of Civil Engineers, Rob Svedberg, principal at Atlanta-based TVS Design, says the roof “tells visitors ‘This is how you use the building.’”

For example, the ribbon creates an enormous, can’t-miss-it arched portico over the main entrance. It continues across the entire façade and over Paradise Road to the east of the hall.

The design team didn’t consider extending the Versa-Dek from inside the main exhibit hall to the exterior ribbon.

“Versa-Dek was not needed due to acoustical treatments not being required outside,” explains Jacobson. “N deck was more economical and easier to install.”

Back inside, the three levels of the West Hall also include 80 meeting rooms. The floors of each feature 3-inch standard composite floor deck.

A composite floor system provides superior strength, stiffness and fire resistance. The deck has embossments in the vertical ribs that bond with the concrete topping after it cures. The composite floors completed the turnkey supply of floor and roof deck solutions throughout the complex.

Roof and Floor Deck Has the Right Look

Boasting a ceiling height of 42 feet, the main exhibit hall will prompt a lot of people to look up. When they do, they’ll see exposed Versa-Dek roof deck throughout. That wasn’t always the plan, however.

“Initially the roof design was a 3-inch N deck, but 2-inch Versa-Dek achieved the required spans and desired acoustic ratings,” explains Fowler. “The decking was designed to be exposed, and Versa-Dek provides an attractive linear plank look.”

A comparable alternative to Versa-Dek is N deck cellular acoustic roof deck, but Fowler says that would have been too costly and time-consuming. Jacobson says it’s important to be able to consider multiple options.

Once installed on the frame, some of the Versa-Dek panels had to be cut in the field to match the exhibit hall’s angled perimeter frame.

In addition to the deck’s aesthetic attributes, Jacobson says it was important for the deck to hide roof fasteners. Versa-Dek conceals unsightly fastener penetrations in the cavities of its dovetail shape. 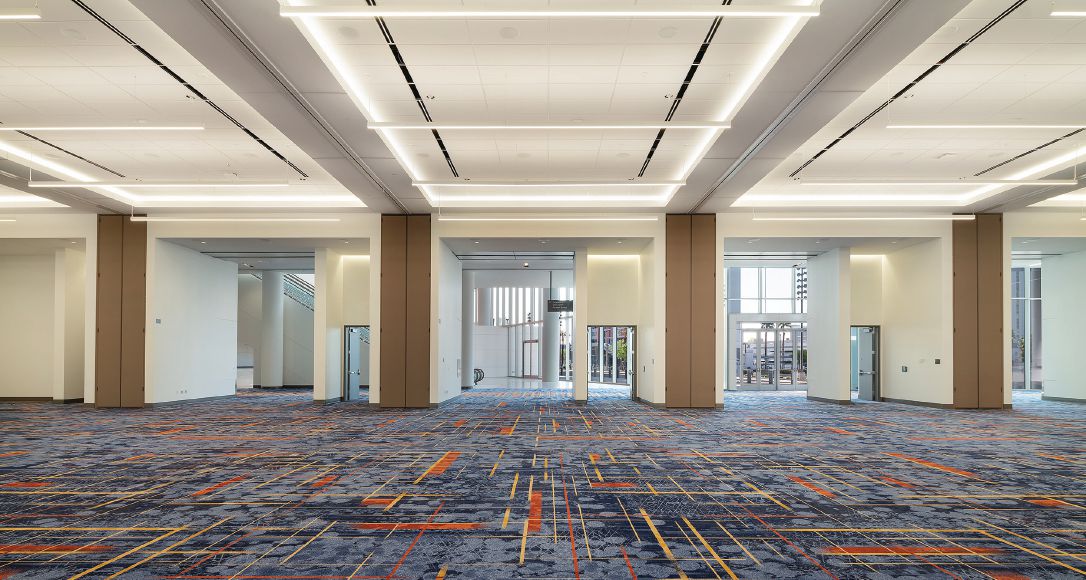 With the main exhibit hall large enough to hold eight football fields, the resulting tradeshow noise probably could rival that of an NFL game.

“A big goal we had to achieve there was the acoustics,” says Fowler. “You’re going to get a ton of noise in there.” 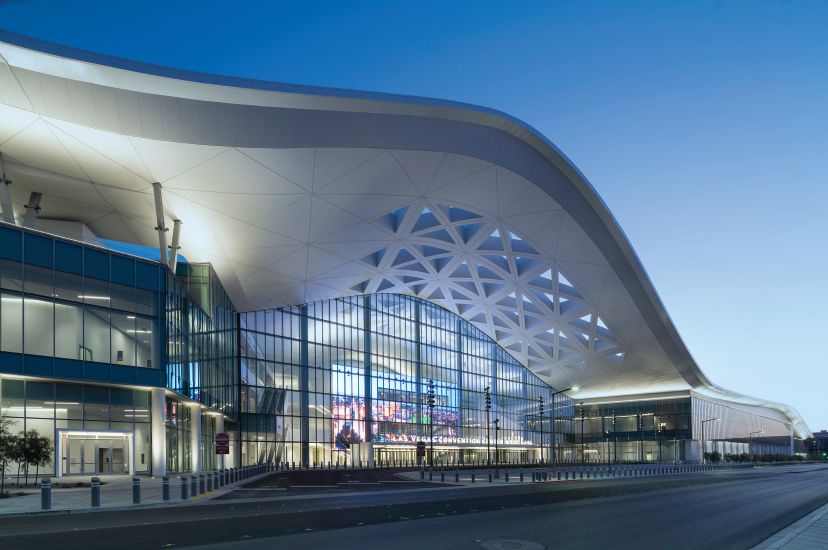 The West Hall expansion officially opened May 12, 2021, for the Tobacco Plus Expo, but the media and Nevada politicians toured the complete facility in early April 2021.

“The architecture and the high-tech ability of the West Hall expansion—it adds a new level,” U.S. Sen. Catherine Cortez Masto told the Las Vegas Sun. “It’s mind-blowing. This is a premier space for businesses to bring their trade shows, and bring their employees and customers to show their products.”

Author’s Note: The owner, architects and engineers involved in this project do not endorse New Millennium Building Systems products but confirm the product use on the West Hall project.