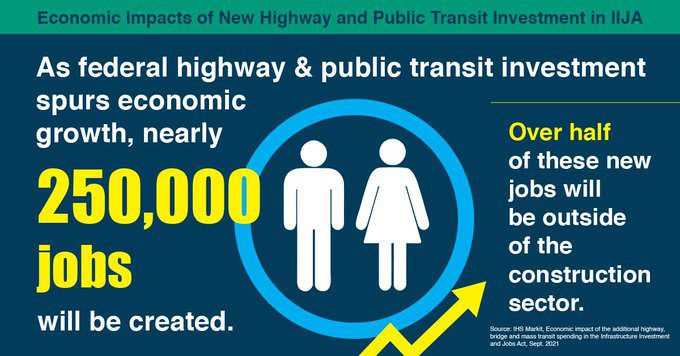 WASHINGTON — Every $1 increase in federal highway, bridge, and public transit investment under the Infrastructure Investment and Jobs Act (IIJA) will generate as much as $3.60 in economic activity, according to a new analysis from IHS Markit, a global information leader with expertise spanning numerous industries, including leading positions in finance, energy and transportation.

Among the major economic benefits documented in the study:

The $1 trillion IJJA was approved by the Senate 69-30 last month and is pending in the U.S. House of Representatives, where Democratic leaders have pledged to act on it by Sept. 27.

It also provides a breakdown of benefits by major industry, with over 15 percent of the jobs created in the manufacturing, health care, social assistance, real estate, and rental/leasing sectors.

The full report, national and state data are available: http://iijaeconomicimpacts.org.

About IHS Markit
IHS Markit (NYSE: INFO) is a world leader in critical information, analytics and solutions for the major industries and markets that drive economies worldwide. The company delivers next-generation information, analytics and solutions to customers in business, finance and government, improving their operational efficiency and providing deep insights that lead to well-informed, confident decisions. IHS Markit has more than 50,000 business and government customers, including 80 percent of the Fortune Global 500 and the world’s leading financial institutions.