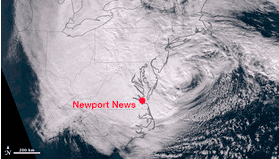 One year has passed since the landfall of Hurricane Sandy and its devastating aftermath, which affected 24 states and hundreds of communities along the US Eastern Seaboard. Included among the communities affected was the City of Newport News, Virginia, a longtime and exemplar Cityworks user. While Newport News didn’t suffer nearly as much damage as other locations along the East Coast, with Cityworks Newport News staff was prepared for the increased workload resulting from the hurricane.

Within Newport News’s Public Works Department, the majority of divisions use Cityworks Desktop, including Administration, Asset Management, Building Services, Solid Waste, Stormwater, Street Maintenance, and Wastewater. The Traffic Engineering group, part of the Department of Engineering, also uses the software. In the Public Works Department, Cityworks is used during emergency and major weather events to facilitate and track the department’s response to work caused by the events.

Kirstin Runberg Platt, GISP, asset management administrator for Public Works at Newport News, explains how Cityworks helps the city respond to weather emergencies: “When a major weather event is forecasted in the City of Newport News or the surrounding region, a Cityworks project with the event name is created. This includes, but is not limited to, snowstorms, hurricanes, and nor’easters. Our Cityworks users attach the project to associated issues and work performed before, during, and after the event, including both service requests and work orders.” Having the project attached to associated work allows users to isolate damage caused by the event, as well as run a variety of reports so users can analyze the effects of that specific project. “The department had 102 service requests and 108 work orders associated with the Hurricane Sandy project,” Platt continues. “We were able to quickly disseminate work to the proper parties, and reports were easily created because the department was utilizing Cityworks.”

During Hurricane Sandy, the department faced a wide range of challenges, including containing or channeling flood water, keeping wastewater pump stations running, and clearing debris. Cityworks made it easy for staff to track work during and after the storm. The work items were tied to the Hurricane Sandy project within Cityworks, which gave Newport News the ability to analyze the data and draw concrete information from it.

“Cityworks reporting provided a very effective way to analyze work performed during and after Hurricane Sandy,” Platt remarks. “Cityworks work orders and service requests ensured we kept track of the work and that it was performed in a timely manner. The reporting capabilities Cityworks offers made it possible for us to better understand the overall effects of the event. Reporting is also especially important when seeking reimbursement from the Federal Emergency Management Agency (FEMA).”

Because FEMA requires agencies to provide specific details on damage caused by an emergency or major weather event, as well as the work required to respond to the issues, many organizations struggle to provide the details they need to get reimbursement. This is usually because at the time an emergency strikes the organization doesn’t have the time or the resources to properly record the work being performed. If the organization keeps paper records, they are often difficult to keep track of and organize during an emergency. By using Cityworks, Newport News’s records of damages and work that occurred during the emergency are stored electronically in the system, enabling the department to simply run a report in order to apply for reimbursement.

“The Department of Public Works implemented Cityworks in June of 2004,” Platt explains. “Many weather events have occurred in Newport News since we implemented Cityworks, and we have used the software to facilitate our response to these events every time. The department and the city have realized both time and cost savings as a result.”

“There is some peace-of-mind knowing that your organization is prepared and ready to deal with emergency situations,” said Brian Haslam, president and CEO at Cityworks – Azteca Systems, Inc. “In those stressful and challenging times, such as with Hurricane Sandy, it’s comforting to know cities like Newport News, Virginia, can depend on Cityworks to help them manage preparedness and damage mitigation efforts caused by such a devastating storm. In 2005, Hurricane Katrina devastated a good portion of the Gulf Coast. Cityworks customer Gulfport, Mississippi, took a direct hit. Yet, with accurate asset data, they we were able to establish FEMA funding and get to work on cleanup and infrastructure repairs within hours. Stories like these continue to resonate time-after-time as we see more and more of our clients utilize Cityworks for emergency preparedness and management. The flexibility and reliability of Cityworks is but one of many strengths that empower our user community.”

Since 1986, Azteca Systems Inc. has been providing innovative GIS-centric Asset Management Solutions to organizations that own and care for critical infrastructure, capital assets, and property. Created and designed exclusively on Esri’s ArcGIS technology, Cityworks is a powerful, scalable, and affordable solution for asset management, permitting, licensing, and more. Time-tested, proven, and a leading system, Cityworks is Empowering GIS® at organizations throughout North America and around the world.