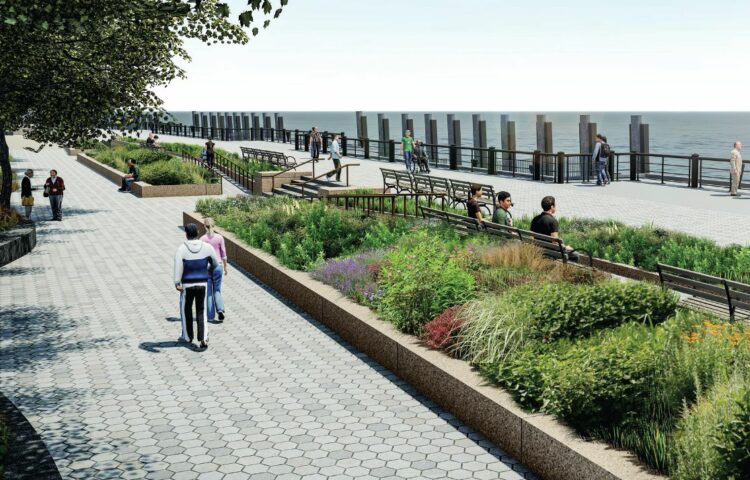 On Aug. 9, 2021, the Intergovernmental Panel on Climate Change released the first part of its much-anticipated “Sixth Assessment Report” (www.ipcc.ch/report/ar6/wg1), which reinforced the fact that sea-level rise is leading to substantial impacts on coastal communities, including a near-doubling in the frequency of coastal flooding since the 1960s in many sites around the world.

The report confirmed that sea-level change through 2050 is largely locked in. Regardless of how quickly nations are able to lower emissions, the world is likely looking at about 15 to 30 centimeters (6 to 12 inches) of global average sea-level rise through the middle of the century because of two main factors: the melting of ice in mountain glaciers and at the poles, and the expansion of water in the ocean as it takes up heat.

New York City and surrounding coastal communities are among the most-vulnerable areas for sea-level rise in the United States. Since Hurricane Sandy hit New York City in October 2012, flooding 17 percent of the city’s land and claiming 44 lives, the scientific community reached consensus that, without significant action, climate change will have devastating consequences at a faster rate than previously thought. Sea-level rise, based on current projections, will submerge parts of Lower Manhattan on a regular basis in this generation, and put critical infrastructure and jobs serving all of New York City and the region at risk, including the city’s subway and ferry network; sewer system; and many historic, cultural and community assets.

To adapt Lower Manhattan to climate change for this generation and the next, the city is taking bold, significant action, investing $500 million in climate-adaptation projects that are part of the Lower Manhattan Coastal Resiliency (LMCR) plan, which is based on a comprehensive study released in March 2019. The study assessed a broad range of climate hazards, including the following:

• Chronic conditions such as rising sea levels and groundwater tables, and tidal inundation

LMCR will protect 70 percent of Lower Manhattan’s coastline, focusing on resiliency projects for the Financial District and South Street Seaport neighborhoods. These neighborhoods represent a unique convergence of high climate risk and few adaptation options due to a waterfront that lacks the physical space needed to implement most large-scale adaptation projects. 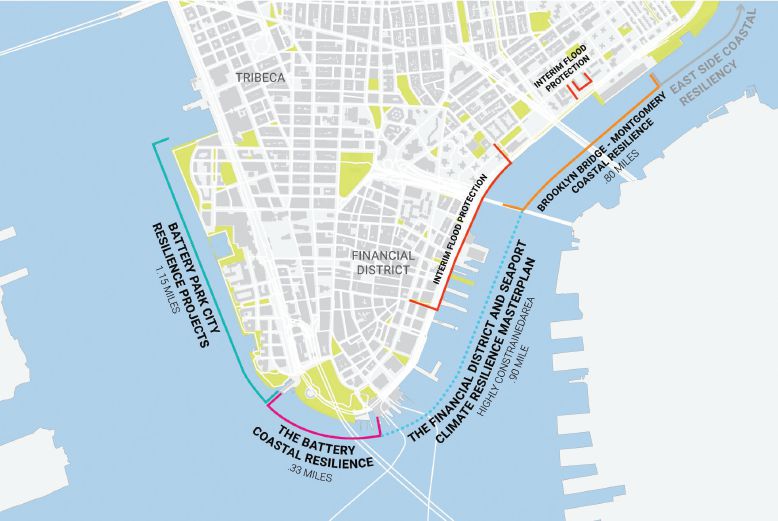 In partnership with Lower Manhattan communities, New York City Economic Development Corp. and the Mayor’s Office of Resiliency are planning for and designing infrastructure that responds to the unique constraints and climate hazards facing the Financial District and Seaport neighborhoods, creating implementation plans to ensure these designs come to life in the future. Each of the advancing capital projects, as well as the master plan, includes its own community and public-engagement process. 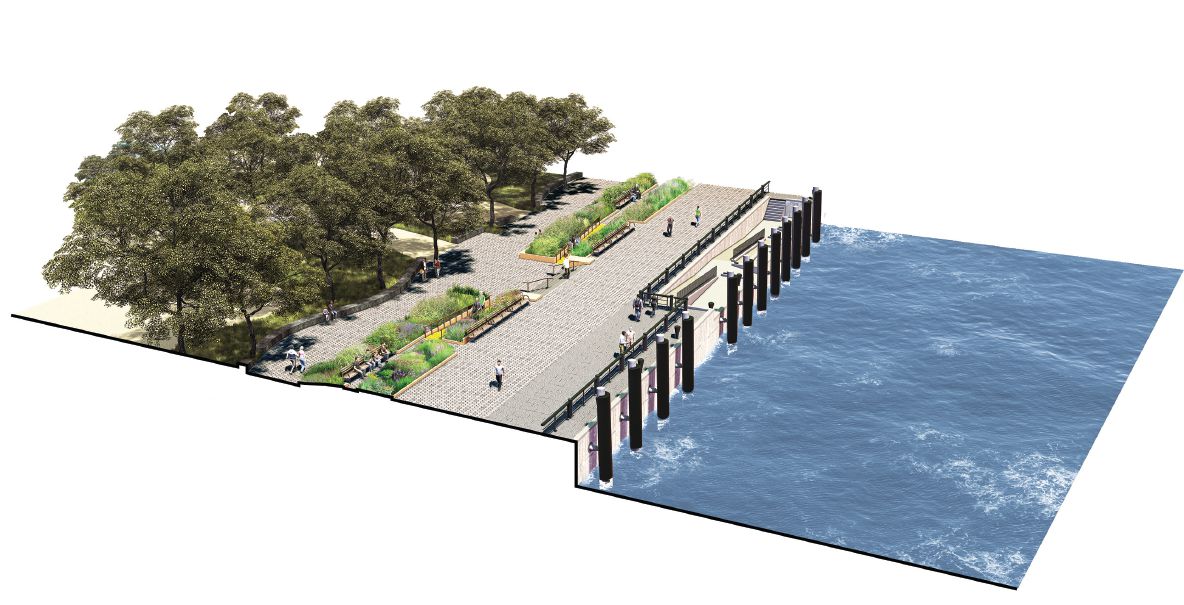 Design renderings for the Battery Coastal Resilience Project were displayed at the project’s first public meeting on March 24, 2021.

The $129 million Battery Coastal Resilience Project, spanning one-third of a mile of waterfront along the 25-acre Battery Park, is one of several underway or in planning as part of the LMCR initiative. Stantec is serving as lead designer for the project, which will ensure usability of this iconic public space for millions of yearly visitors during the next 80 years and play a critical role in Lower Manhattan’s growing network of resiliency reinforcements.

The Battery currently sits at an elevation that will be submerged as sea levels rise. As part of the project, the wharf at the southern tip of Manhattan will be reconstructed, raising the waterfront esplanade approximately 5 feet above its current elevation—11 feet above mean sea level—to protect the park and nearby community. Several complex issues will be addressed in the design, including in-water construction, interior drainage and integration of a new wharf elevation with the existing parkland.

“The Battery is one of New York City’s most-beloved parks, but it faces significant flooding challenges if the wharf remains at its current elevation,” explains Amy Seek, Stantec’s design director. “Our goal through this project is to seamlessly integrate critical infrastructure upgrades into the park, without sacrificing its sweeping views of New York Harbor, bountiful plant life and historic features.”

The project team anticipates using an adaptive design strategy—one that will continue to provide the well-known views of New York Harbor, relief from sea-level rise and nuisance flooding, and flexibility for uncertain future conditions. Improving universal design and accessibility at the wharf also is a primary objective of the project; the concept design integrates ramps and pathways into the elevated wharf while maintaining accessibility to the waterfront.

Concept design renderings were displayed at the project’s first public meeting on March 24, 2021. The project will continue in design throughout 2021 and 2022 with various levels of design reviews by approval agencies. Groundbreaking is forecast for late 2022. The interdisciplinary design is being led out of Stantec’s New York City office and will include landscape architecture, waterfront engineering and environmental review, with the support of several specialty contractors. (Learn more about this and related LMCR projects at fidiseaportclimate.nyc/protecting-lower-manhattan.)

The Tottenville Shoreline Protection Project features a hybrid dunerevetment, which is made of a sand dune with an interior armor core placed below a cover of dune sand and native plantings.(Stantec) 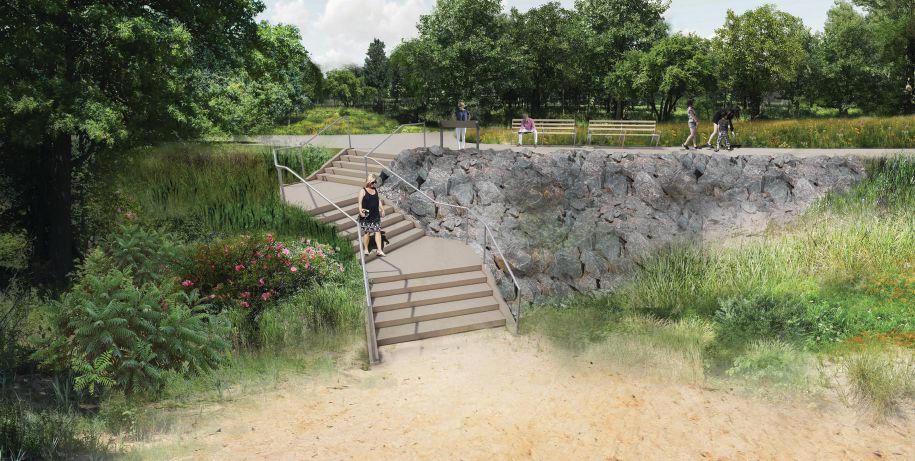 A raised berm in the Tottenville Shoreline Protection Project weaves through an existing maritime forest and is constructed of an interior armor core and topped with soil and native plantings. The earthen berm transitions to the wetland eco-revetment.(Stantec)

Another Stantec project focused on coastal and marine resilience in New York City is the Tottenville Shoreline Protection Project (TSPP), which was developed through the New York Rising Community Reconstruction Program on Staten Island. Tottenville, a shoreline community of 3,400 people on the southwest side of Staten Island, has sustained decades of coastal erosion and, in 2012, its condition worsened in the wake of Hurricane Sandy. The severe weather event devastated Tottenville and left the neighborhood even more vulnerable to flooding, land loss, storms, infrastructure damage and harm to human life.

The Tottenville shoreline is diverse and complex, with multiple habitats, geology, urban development and flood risks. Based on input from the city, community stakeholders and an environmental conditions evaluation, the Stantec team, including landscape architects, coastal engineers, structural engineers and ecologists, recommended a nature-based solution customized for each distinct segment of the beach.

1. Reduce coastal risks, including erosion and the impact of storm waves.

TSPP’s final design was complete as of spring 2020. The team incorporated a layered approach that included wetland enhancement; eco-revetments with plantings and public-access elements at the project’s narrowest but most-public segment; hardened dune systems; shoreline plantings; maritime forest restoration; and earthen berms, which weave through an existing maritime forest and are constructed of an interior armor core topped with soil and native plantings.

These approaches were chosen to effectively address the diverse impacts of wave action and shoreline erosion while restoring and enhancing the existing ecosystem, making the community more resilient to future extreme weather events. Although the team also considered a strategy that focused on traditional techniques, including a vertical seawall and rubble-mound revetment, it recommended a more natural alternative based on the physical and environmental diversity of the existing shoreline, limited project footprint, need for increased resiliency and desired preservation of natural features.

Projects such as TSPP demonstrate the possibility of achieving desired risk reduction while finding a better balance between the built environment and natural systems. By understanding the potential to incorporate nature-based solutions, design teams can improve their chances of achieving positive benefit-cost as well as further a sustainable and resilient vision for the future of coastal communities.