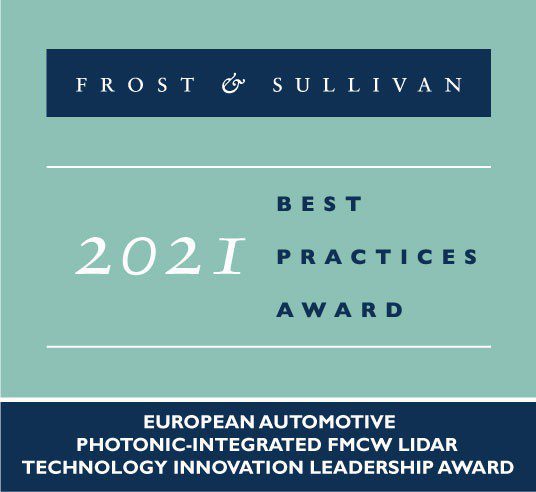 FMCW-LiDAR: award for the missing link into future mobility
Autonomous driving cars, robot taxis, and unmanned industrial vehicles can use LiDAR sensors to detect objects at a distance of up to 300 meters, even under difficult environmental conditions, such as fog, snow, and dust. FMCW LiDAR will facilitate the breakthrough in autonomous driving and, according to experts, will completely force the currently used Time of Flight (TOF) LiDAR systems out of the market. Scantinel has received this Frost & Sullivan award because its solution sets it apart from competitors. The German start-up is working on next-generation sensors that are technologically advanced and highly integrable. Moreover, these sensors will be produced in volume at a competitive price, which is a key industry criterion, especially in the automotive industry.

In addition to recognizing the impact that the solution will have on future technology, Frost & Sullivan commends Scantinel’s industry-proven management team and the technical competence of the developers. Frost & Sullivan analysts have rated the backing from ZEISS Ventures and Scania Growth Capital, in Series A financing, as a success factor that will contribute to a promising economic future.

“Frost & Sullivan recognizes that with the photonic-integrated coherent FMCW LiDAR, Scantinel Photonics stands out from its peers because it will eventually usher in a new generation of LiDAR sensing with enhanced competencies,” says Varun Babu, Industry Analyst, TechVision.

“We are very honored by this award and appreciate the quality of Frost & Sullivan’s analysis,” said Dr. Michael Richter, Commercial Managing Director of Scantinel. “Photonics is one of the most innovative high-tech industries and contributes significantly to the technological development and solutions for autonomous driving. The award represents even more motivation for us, confirming that with our LiDAR System we are excelling in our part towards safe future mobility.”