/ Transportation / How Smart Cities Must Plan for Electric Cars

How Smart Cities Must Plan for Electric Cars 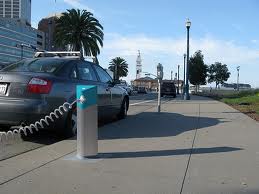 In a smart city, every electric vehicle must have access to a charging station within its driving range. So how should these stations be located? The good news: computer scientists have solved the general version of this problem. The bad news: it’s hard.

At first sight, the problem looks easy to solve: just put charging stations in every gas station. Unfortunately, that doesn’t work because charging takes such a long time that gas stations, which have limited forecourt area, would quickly become full. What’s more electric cars generally have a lower range than gasoline-powered cars so there’s no guarantee that the existing network of stations would do the trick.

So charging stations will have to be distributed in a different way, usually in special parking spots on ordinary roads and in car parks. But how far apart should they be?