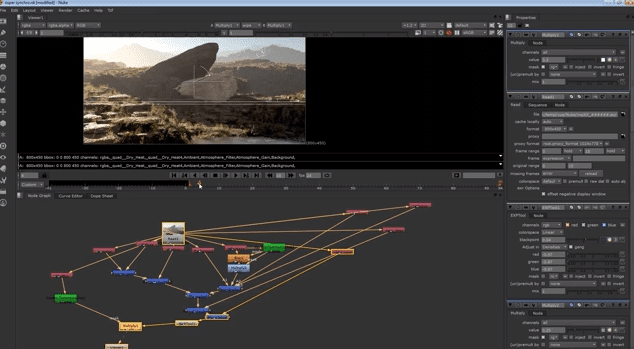 Release 2014 focuses on strengthening the core features of Vue – light, atmospheres and EcoSystems. Thanks to dedicated exchange filters, it also pushes integration into existing pipelines.

Here is a shortlist of some of the important new features included in Vue 2014:

* These features are available in Vue xStream 2014 only.

** At time of release, Windows only. Compatibility with Mac C4D R15 coming soon.

Maintenance is the most cost effective solution for staying up-to-date with your products. Yearly maintenance is available for both products – see www.e-onsoftware.com/maintenance for details.

Schools and training centers can become member of e-on software’s ATC program and equip themselves with Vue xStream or Infinite 2014 at a massive discount. Site licensing is available for $2000 (max. 30 seats) per year. Individual licenses are available to members of ATC institutions only, for $149 (xStream) and $99 (Infinite) per year.

Owners of an active Vue 11.5 EDU license will receive their upgrade to Vue 2014 for free, however, Educational Licenses will no longer be available to individuals who are not part of an ATC institution (see below).

The Vue 2014 Personal Learning Edition allows any Artist or Student to learn the best Digital Nature tool for free. The PLE now outputs files that can be rendered without limitation using an ATC license. Students can thus work from home using the free PLE and bring their work back to school for use (and final rendering) using their school’s resources.

The Vue 2014 Personal Learning Edition is scheduled for release before the end of November 2013.

Vue xStream 2014 is compatible with the following renderers:

Other renderers are under consideration.

* The initial build of Vue 2014 does not support the Mac OSX version of Cinema4D R15.
Support will be added shortly.

E-on software products were used in feature films such as as as “Epic”,”Hunger Games”, “Upside Down”, “Hugo”, “Tintin”, “Super 8”, “Thor”, “Avatar”, “Clash of the Titans”, “Sucker Punch”, “Despicable Me 1 & 2”, “Ice Age 4”, “The Wolf Man”, “2012”, “Lovely Bones”, “GI Joe – The Rise of the Cobra”, “Land of the Lost”, “Terminator 4, “The Curious Case of Benjamin Button”, “Indiana Jones 4”, “Monster Vs Aliens”, “Australia”, “The Spiderwick Chronicles”, “KungFu Panda”, “Pirates of the Caribbean 2” and TV series such as “Spartacus”, “Smallville”, “Battlestar Gallactica”, “Caprica”, “Stargate Atlantis”, “Stargate Continuum”, and more. Read more on these stories in e-on software’s Spotlights section: www.e-onsoftware.com/spotlight.