Urban Planning for a Changing Climate 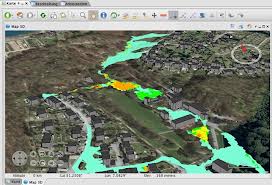 Rising sea levels, severe storms, droughts, hotter summers and colder winters are just some of the threats Europe’s cities face from a changing climate. Urban planners need to be able to take into account these and other effects of climate change if they are to successfully reduce their impact on the urban environment, the economy and people.

The work of the SUDPLAN partners, led by the Swedish Meteorological and Hydrological Institute (SMHI), will help ensure that buildings and infrastructure stand the test of time and changing weather patterns. This will reduce the risk that your office, house or street will be flooded, your water cut off during a drought, or your city affected by dangerous levels of air pollution.

Modern urban planning techniques are based on historical data. This means that urban planners can tell, for example, how high river levels typically rise after heavy rain and design buildings and transport infrastructure accordingly.

They cannot, however, easily estimate how high the same river will probably rise in 10, 20 or 30 years based on predictions of future climate change. A bridge, housing estate or subway system that is safe from flooding today may end up being regularly submerged by the wetter winters and stronger storms expected in decades to come.

Unlike some tools that use global climate change forecasts, the SUDPLAN system scales the data first to the European level and then to the urban level to generate what the project team describe as the ‘best possible’ localised precipitation, temperature, hydrological and air quality data for a period typically stretching from 1960 to 2050 and beyond.

Until now, urban planners would have had to gather a group of experts on climate, hydrology and air quality to achieve the same.

Users are able to run simulations at different scales to visualise in 3D or 4D what might happen to a single infrastructure project, city or region, covering such diverse applications as extreme rainfall causing problems with drainage and sewage systems, hazardous air pollution and high ambient temperature leading to health risks. They can even simulate how people may move as a result of the demographic impact of climate change.

The system was field tested in four pilot trials in Stockholm in Sweden, Wuppertal in Germany, Linz in Austria and over a 150-km2 area around the city of Prague in the Czech Republic.

As a web-based tool, the SUDPLAN system helps urban planners expand their modelling of future weather impacts over and above the existing range of available applications.

The project was managed by Dr Lars Gidhagen of the Swedish Meteorological and Hydrological Institute with funding of more than EUR 3.3 million, of which around EUR 2.5 million came from the EU.