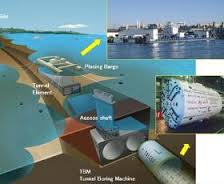 The Marmaray Tunnel in Istanbul opened on October 29, six months before the beginning of the two trade shows Seismic Safety and INTERGEO Eurasia. The “project of the century” connects the European and the Asian parts of the city. The spectacular tunnel is a perfect example of the city’s earthquake-resistant future and of the contribution that both events can make in that effort. Seismic Safety and INTERGEO Eurasia showcase solutions that pertain to buildings and urban structures and deal with topics including earthquake resistance, fire protection and urban renewal combined with the necessary measuring and testing systems and geo-data concepts.

The 13.6-kilometer-long tunnel, which was officially opened in time for the 90th anniversary of the founding of the Turkish Republic, should considerably relieve the metropolis of 15 million people, which is plagued by traffic jams. Plans call for expansion of the Marmaray line to 77 kilometers. During the next three years, the line will also be integrated into Istanbul’s metro network.

The central element of the new tunnel is a 1.4-kilometer-long double tube that connects the European and Asian continents with one another. Made of special-purpose concrete, the tunnel is nestled on the ocean floor at a depth of nearly 60 meters. The tunnel’s builders ensure that it can even withstand an earthquake with a magnitude of 9. As a result, the tunnel is protected again earthquakes better than most of Istanbul’s high-rise buildings. A look at the city’s geodetic data shows how important earthquake-resistant construction is. The tunnel is just 20 kilometers away from a tectonic fault zone.

Like all of Turkey, Istanbul is at high risk for earthquakes. According to estimates, 70% of the Turkish population lives in first and second-degree seismic regions, and most buildings in Turkey’s cities would not be able to withstand a strong earthquake. Some 6.5 million apartments, or one third of all existing structures, are at risk. Some 1.6 million apartments are affected in Istanbul alone.

That is exactly where Seismic Safety and INTERGEO Eurasia come in. Both trade fairs have exactly the portfolio of products and solutions that the Turkish government needs to realize its ambitious objectives. Its broad-scope renovation and modernization program calls for renewal of endangered buildings and even entire sections of the city. Over the next 20 years, USD 400 billion will be invested to do so, USD 100 billion of that in Istanbul alone.

Seismic Safety and INTERGEO Eurasia take place at the WOW Convention Center Istanbul, which is directly accessible from the Ataturk International Airport, on April 28 – 29, 2014. Both events are being organized by MMI Eurasia in conjunction with Messe München International, HINTE Messe, and the DVW (German Association of Surveying).