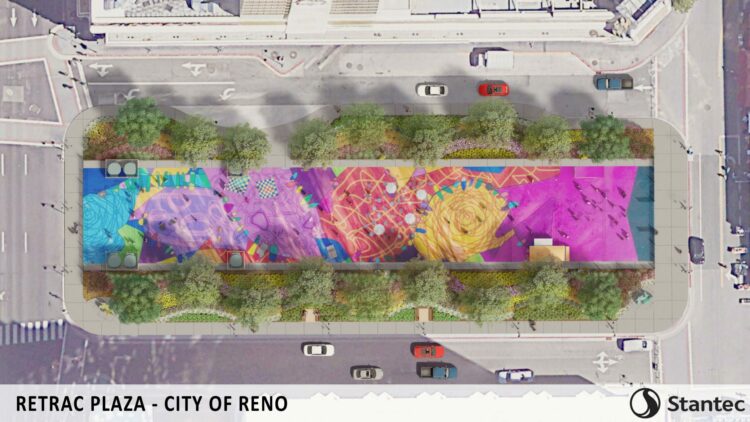 Reno, NV – The City of Reno, Nevada, was recently selected as one of 16 city projects in the first year of the Bloomberg Philanthropies Asphalt Art Initiative. The selection, coupled with an additional Nevada Main Street grant, enables a critical city beautification project more than a decade in the making to move forward. In collaboration with the Downtown Reno Partnership and the City of Reno, global design firm Stantec led the conceptual plan for the beautification of the Reno Transportation Rail Access Corridor (ReTRAC). The ReTRAC beautification project will feature a large community-themed mural as its centerpiece, complemented by a large variety of perennials and grasses to emulate the motion of the mural with different seasonal colors and textures. The project is part of a larger placemaking and programming goal for the Downtown Reno Partnership and is set to serve as an aesthetically pleasing backdrop for large community events and activities.

The City of Reno once served as one of the largest transportation hubs in Northern Nevada for the Union Pacific Railroad. In the early 1940s, ReTRAC was proposed to improve the overall quality of life in Reno and was finally completed in 2005. Stantec was part of the design team that lowered 2.25 miles of railroad tracks below the city streets. In the heart of downtown, three concrete “lids” cover portions of the tracks. The City of Reno originally planned to turn them into green spaces, but the 2008 recession halted those ideas, leaving behind large concrete slabs and undeveloped native material. Although the local community transformed one slab into a much-needed dog park for downtown residents years ago, the new project represents an opportunity to further expand the livability and public-interaction in Reno’s downtown.

As part of the project, artist Brad Carney was selected to design a mural and lead 300 community volunteers to turn the concrete slab into a programmable art plaza. The mural comprises 15,000 square feet, features 21 colors, engages volunteers for 60 to 100 hours, and requires 500 gallons of paint. Notable mural images and motifs include:

“This has been a beautification project in the making for over two years,” said Alex Stettinski, Executive Director of the Downtown Reno Partnership. “We are proud this is coming to fruition in partnership with the City of Reno at a time when placemaking is crucial to help ignite traffic and vibrancy in our downtowns.”

As a complement to the mural, Stantec designed a landscaping plan featuring a wide variety of perennials and grasses accented by large canopy trees. With the opportunity for nearby hotel guests and high-rise residents to view the ground plane, it was critical to develop a pleasing visual form that could be appreciated from the viewpoints above. The plan includes 1,600 plants, 19 trees, and two concrete plinths for the easterly corners on South Virginia Street to accommodate future sculpture installations, as well as infrastructure to support public events. The City is currently working on a lighting plan.

“This is a project that truly belongs to the residents of Reno, and one we are proud to support,” said Cynthia Albright, project manager and a senior principal in Stantec’s Reno office. “It’s humbling to have the opportunity to tangibly enhance one of Reno’s most highly utilized areas at the core of our City. We look forward to experiencing this area as a real public plaza that both celebrates our City’s rich history and brings people together in a beautiful setting. The project was a true team effort, and we can’t wait to see it come to life.”

The City of Reno’s Public Works Department aims to complete landscape design in July. The Arts & Culture Commission will assemble teams of local artists who will lead community members in painting the mural. Carney will lead the teams the week of June 7.