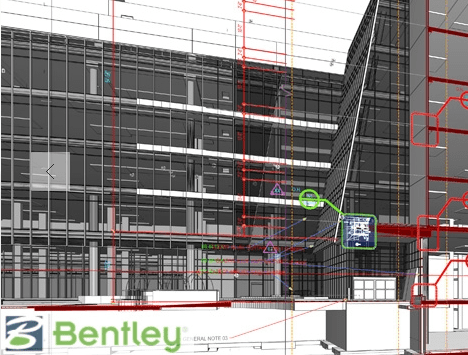 Mark Bew, chairman of HM Government BIM Working Group addressed the rail and transit group at Bentley Systems’ Year in Infrastructure Conference today in London. The United Kingdom is leading the world in their adoption of Building Information Modeling (BIM) standards, with aggressive goals for realizing gains for greater efficiency and a focus on building performance.

The digital strategy began in 2007 with introduction of a BIM standard. The strategy sets out to reduce costs by 33% by 2025, carrying forward on the 20% reduction that have already been realized, and the next jump is significant. There are also goals to lower emissions by 50%, with buildings emitting a great deal of greenhouse gases. The government is also looking to export capabilities, because the infrastructure industry will flatten out over the course of the next 50 years.

The UK government’s BIM strategy has three levels, with the first to move toward greater collaboration with file-based tools. Level 2 has better information management as a goal. Level 3 moves into operations, where there’s the most disruption moving toward facility management tools.

The government is running 800M Pounds of projects at the moment, giving some scale to the work that is going on. The progression of those projects with the model-based approach has many levels where greater efficiency translate into good cost savings. At present, they’re seeing 10% cost savings in the supply chain with less time and effort spent on design and planning, and 10% savings on the client side with much better coordination.

Standards are a key to making this new approach work for buildings and civil/infrastructure. COBie (Construction Operations and Building information exchange) is a shareable format. The government now has an accelerated move to finish Uniclass specifications by the end of next summer, with more details on the data needed at different steps of the project.

High Speed 2 is a rail project that was provided as an example, alongside a prison project, showing that the process for a building shares much of the same steps and processes as a transit infrastructure project. The deliver process starts with no data, and ends with handover of the data to the owner.

2016 is the goal to move toward Level 3, with this step involving asset management talking to BIM models. The example of a race car’s data from a race that is analyzed closely for performance and improvement after a race, is the kind of movement needed for our understanding of our buildings and infrastructure.

Ramping up this change to BIM requires a great deal of communication and education in a short timeframe. The route to become a world leader has been noticed globally, with the team winning the Porter award from Fiatech this year, the first time it has been given outside of the United States. Going forward, there is a move taking place to connect and align the BIM modeling approach to the Smart Cities approach. Standards are an early part of this effort, with

Full resources can be found at http://www.bimtaskgroup.org